You are here:
North Carolina 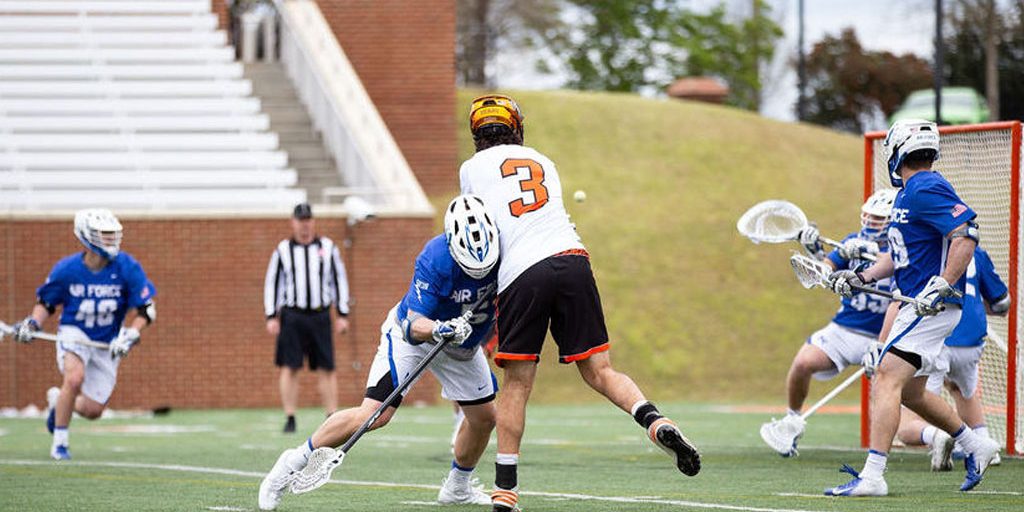 That distinction is an especially important one because of the strange history of lacrosse in, and with, the state of North Carolina.

So just to be clear:

Yes, John Tesh, for instance, did in fact play D-1 college lacrosse within the state of North Carolina.

But no, he wasn’t actually from North Carolina, so he doesn’t qualify for this list (he grew up on Long Island and played for one of the area’s premier programs, Garden City).

But the very fact that Tesh played college lacrosse in North Carolina itself says a lot.

The former sports personality and musician, who’s often been ridiculed (among many, many other things) as a Lurch-like clod, played not only Division 1 lacrosse but also D1 soccer.

And he played not at Duke, UNC, or even High Point, but for another school which, between 1973 and 1982, fielded a D1 program that’s now largely a forgotten afterthought: North Carolina State.

Tesh’s recruitment by the Wolfpack from his native Long Island highlighted another, more central peculiarity about the lacrosse in the Old North State. 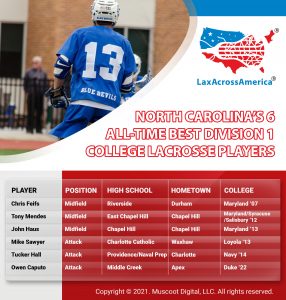 The Strange Case of Lacrosse and North Carolina

The game of lacrosse has managed to grow and flourish in states like California, Texas, Tennessee, Minnesota, and Illinois—states that, significantly, don’t have (and have never had) within their borders a Division 1 college lacrosse team.

North Carolina, for a number of years, provided the flip side of that equation.

For decades the state had the benefit of two (and sometimes three) nationally competitive college programs.

But an out-of-state recruit like John Tesh was prized by the Wolfpack for the simple reason that, at the time, not a single high school in the entire state of North Carolina fielded a lacrosse team.

Even nine years after UNC had won its first national championship, little had changed.

By that year, 1990, there was a grand total of only three programs in-state.

But when it did start, growth came fast.

There were approximately 65 high school programs by 2004.

In 2008 the state voted to officially sanction the high school game, and by 2019 there were 106 boys programs statewide.

One constant is that there are still only a handful of natives on the rosters of the state’s 3 D1 programs.

UNC had four natives on its 2019 roster; High Point had the same number.

Duke had only two.

But one obvious barrier for local talent has been the very quality and selectivity of these programs.

UNC won another national championship—its fifth—as recently as 2016 (a year in which the women’s team won the national title as well).

Duke has won three titles, and High Point, which defeated both Duke and eventual national champion Virginia in 2019, has increasingly figured in national rankings.

More encouragingly, these D-1 players didn’t represent, as they do in so many of the sport’s growth areas, only a handful of schools. Twenty different schools were represented.

The usual A-to-Z litany of North Carolina high school powers, or in this case, A-to-W, usually begins with Apex and ends with Weddington (with stalwarts like Cardinal Gibbons, East Chapel Hill, Middle Creek and Providence also included). The fact that 20 were represented on the D1 level shows an impressively broad base of talent.

One last note: something else connects most of the players on this list.

Sawyer grew up in Waxhaw and attended Charlotte Catholic High School before entering Loyola. He was a three-time USILA All-American at attack, a Tewaaraton finalist, and was instrumental in the Greyhounds’ 2012 national championship run.

Over a 4-year career he had 154 points on 128 goals and 26 assists. Entering the MLL in 2013 as the first-round pick of his hometown Charlotte Hornets (#8 overall), and punctuated his arrival in the league with a then-record shot, taken during a halftime skills competition, clocking in at 114 mph.

In three MLL seasons he scored 68 goals in 42 games.

A Charlotte native, Hull successively played midfield, defense, and goalie, before making a final switch in 8th grade to attack. He was a high school All-American his junior and senior years, leading Providence in his senior year to a 22-1 record and a state championship.

After a PG year at Naval Prep in Rhode Island, Hull was the Patriot League Rookie of The Year at the Academy in 2011.

Hull—as well as his running mate at attack Sam Jones— was undoubtedly hampered by the relative weakness of the Navy teams he played on (during his 4 years the Midshipmen had an uncharacteristic 4-year record of 17-35, going 4-9, 6-6, 3-10, and 4-10.)

He still managed to achieve Second-Team All-Patriot League honors in 2012, and in 2013 gained a spot on the Tewaaraton Award Watch List.

Haus has a well-documented pedigree in both lacrosse and North Carolina. His father John was a two-time All-American at defense at UNC and played on two Tar Heel National Championship teams in the 80’s.

The senior Haus served as head coach at both Washington College (where he won a D3 championship) and Johns Hopkins (going 20-7), before returning to Chapel Hill to take the same position in 2000. (The move from Hopkins to UNC came with risks: UNC had gone 26-29 in the preceding four years, and 1-11 in the ACC. The Tar Heels hadn’t won an NCAA tournament game since 1993. In his eight years at UNC, Haus went 58-52).

The junior John Haus was a two-time All-American at Chapel Hill High School. At Maryland, he won First Team ACC honors at midfield in both 2012 and 2013, and was a three-time USILA All-American (and a first-team selection in 2013).

Haus played in two national championship games with the Terps, and was the 15th overall selection in the 2013 MLL draft. Selected to the 23-player roster that competed for the U.S. in Israel in the International Lacrosse Men’s World Championship in 2018, Haus is now an assistant coach at Penn State, having previously worked on staffs at Dickinson, High Point, and Furman.

Tony Mendes provides further evidence of the reality—one meant to be brought home in a number of ways and a number of places throughout this site—that not all top-shelf talent plays (or chooses to play) at the D1 level.

Mendes, who had 178 goals and 125 assists at midfield for East Chapel High School, had gained an extraordinary amount of national attention for a North Carolina player at the time.

Mendes had been the state’s first-ever selection for the Under Armour All-America Classic in 2007, had played for the South in the National Senior Showcase (in which he scored seven goals), and for the U.S. Under-19 National Team (for which he scored two goals in the gold-medal victory over Canada).

Mendes also had the imprimatur of two national publications: receiving attention as the Sports Illustrated High School Athlete of the Week and inclusion in the magazine’s “Faces in The Crowd” section (this was in 2007, before, sadly, SI’s readership and cachet would both be significantly diminished), and recognition by Inside Lacrosse as the nation’s 12th best incoming freshman midfielder and thee 32nd best overall recruit.

After brief D1 stints at Maryland (one season) and Syracuse (where he was hampered by a knee injury), Mendes ultimately landed at D3 powerhouse Salisbury.

He helped lead the Seagulls to a national championship in 2001, and was Honorable Mention USILA All-American in both 2011 and 2012.

Caputo saw limited action at attack in his 2019 freshman season at Duke, so his inclusion on this list might seem either premature of completely wrongheaded. After all, his first recorded point (an assist against Richmond), didn’t come until the opening round of the NCAA tournament.

Still one of the places Caputo was used, tellingly, was on UNC’s extra-man unit. He’s included on this list for the same reason: his demonstrated scoring potential.

An Under Armour All-American selection, Caputo ended his high school career with 504 points—and as the state’s all-time scoring leader.

Caputo’s upside is also enhanced by an uncommonly high lacrosse IQ—even more uncommon for players outside traditional hotbeds. He’s a coach’s son, though in his case father Ron isn’t a volunteer weekend coach on the local youth team, but instead a long-time assistant at Duke under John Danowski. 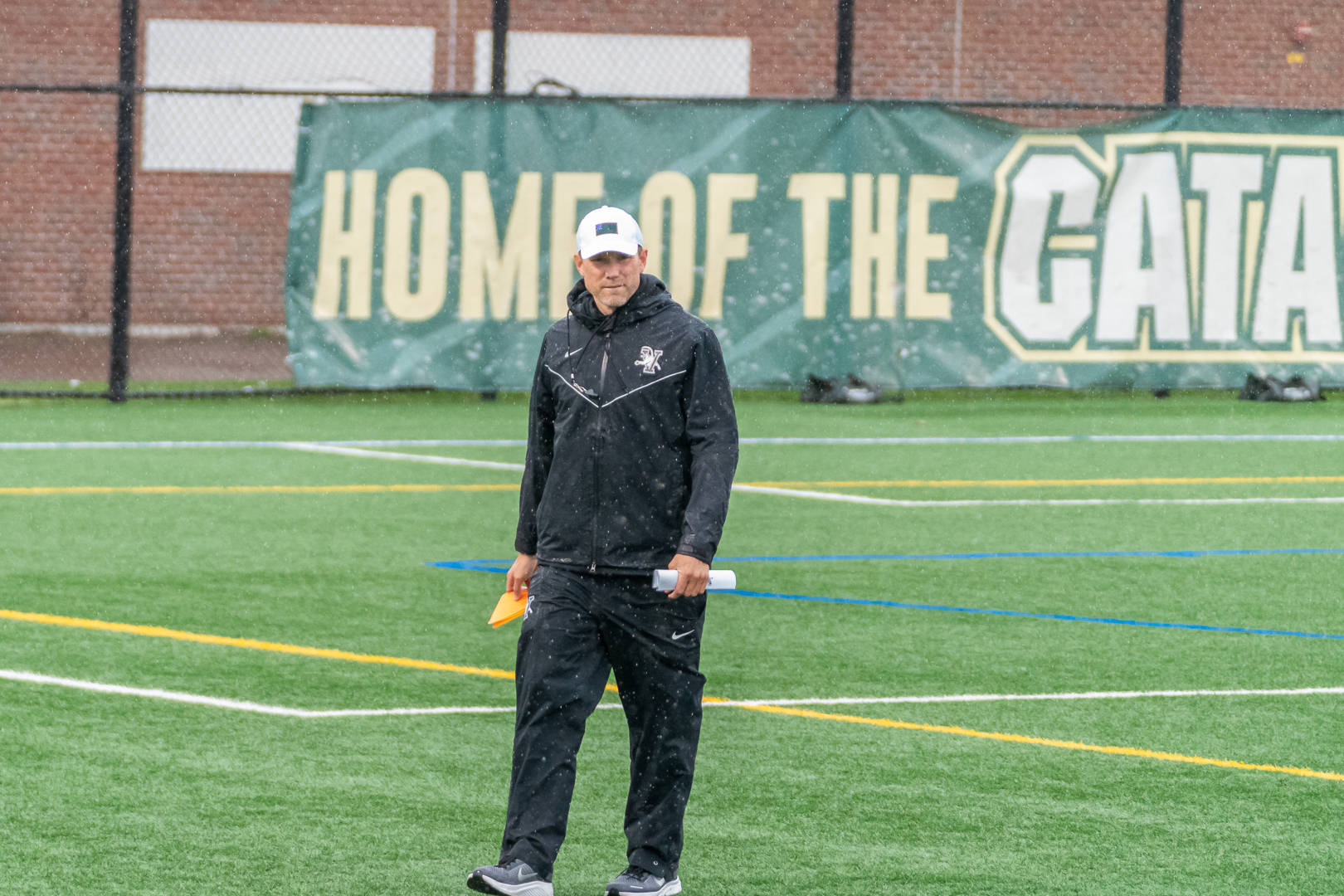 Chris Feifs, now in his fifth year as head coach at Vermont, prepares for a rainy April 2021 game vs. Albany. (Photo for LaxAcrossAmerica by Meadowood Media).

An All-American at Riverside High School in Durham, Feifs gained the distinction of being the state’s first scholarship athlete to play lacrosse at Maryland. He ultimately captained the Terps and was selected in the 2007 MLL Supplemental Draft.

But Feifs’s inclusion on this list is equally a nod to his coaching career and potential.

Having coached at VMI, and served as defensive coordinator for 2016 national champion UNC, Feifs took the coaching job at the University of Vermont. Feifs has raised both the profile of (and with that, expectations for) the Catamount program.

The Catamounts regressed in 2019 to 8-9, but that shouldn’t diminish the sense of promise that Feifs has brought to a less than storied program (UVM had had all of 6 winning seasons between ’92 and 2017).

Feifs seems capable of establishing the program as a consistent counterweight to Albany in the America East Conference).