You are here:
ILLINOIS 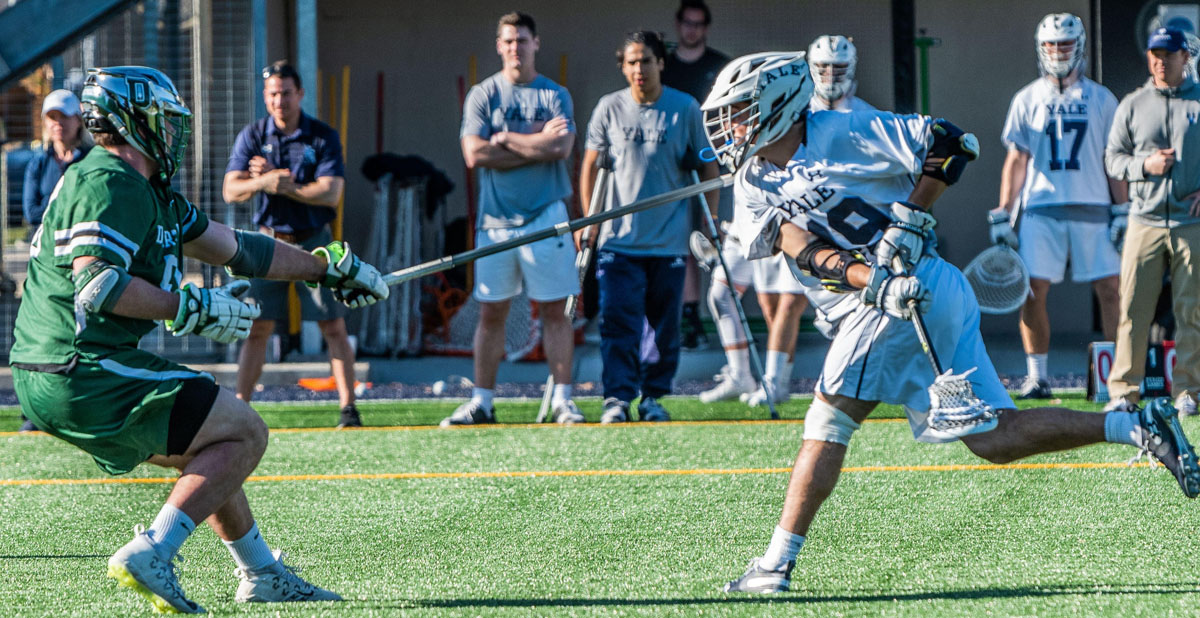 So what’s the relevance to lacrosse?

For one thing, the two sports share a dislocation in numbers between grassroots participation within Illinois and representation in-state at the college D1 level.

Players from Illinois do comprise the fourth largest contingent of D1 hockey players by state—behind only Minnesota, Massachusetts, and Michigan.

And those three states, between them, boast a total of 22 D1 men’s hockey programs.

Illinois, on the other hand, has none.

In 2019, there were similarly over 35 Illinois players on NCAA D1 college lacrosse rosters .

But unlike neighbors Indiana, Wisconsin, and even Kentucky, Illinois has within its borders not a single D1 college lacrosse program.

As for hockey, The University of Illinois now seems poised to add a men’s D1, which would make it the Big Ten’s eighth program.

Reports have varied as to the Title IX adjustments that would be necessary with the addition of hockey.

One recent report quoted athletic director Josh Whitman to the effect that no sports would need to be added or cut to ensure Title IX compliance.

Another account suggested women’s hockey, field hockey, or women’s lacrosse would be added to assure compliance.

So there’s still a possibility then that, as happened at Arizona State, men’s D1 hockey might give birth to a D1 lacrosse program—but a women’s program. This would seemingly foreclose any near-term prospect of men’s lacrosse being added at either Illinois or Northwestern, which already has a highly successful women’s team. 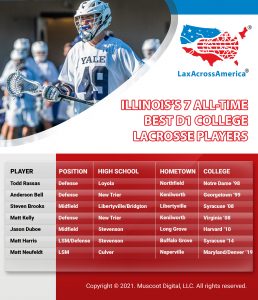 So, Pat Spencer, winner of  the 2019 Tewaaraton Award, D1 college lacrosse’s equivalent of the Heisman Trophy, now plays D-1 for an Illinois team.

But one final point regarding hockey…

Hockey is also relevant here since Illinois has had a long tradition of fielding lacrosse teams with tough, highly accomplished, multisport players.

A case in point is the Loyola team that won the inaugural state championship in 2018 following formal sanctioning of high school lacrosse in Illinois.

That team featured midfielder Jack Burke, a cornerback on Loyola’s state championship football team (and also a hockey player); and Cooper Prawdzik and Timmy Hackett, who each played for a Loyola hockey team that won the state title in 2018.

Prawdzik, who also captained the Loyola hockey team, begins his D1 lacrosse career this spring at Harvard; Hackett will begin his at Bryant.

The Evolution of Illinois Lacrosse: from the D1 College Perspective

There’s a good deal of perspective to be found in a recent GameChanger Lacrosse podcast interview with Steven Brooks, one of the players listed below.

Illinois currently has about 83 boys teams (and about 59 girls programs) competing statewide. A disproportionate number of those programs are concentrated in the Chicagoland area, but total is still impressive.

Contrast that we with situation when Brooks was playing for Libertyville in the early 2000’s—when there was a total of only 19.

Even that had been significant progress.

The sport’s growth during the sport’s earliest days in Illinois had been achieved mostly on the back of Rick Martin, who did much to popularize lacrosse in the state.

Martin presided over the Illinois High School Indoor Lacrosse League—in which Brooks first played the game—and ultimately guided the body governing high school lacrosse prior to its official sanctioning by the state in 2018.

You get a sense of just how far the sport had come from a 1992 Chicago Tribune story in which Martin trumpets the fact that the league now had a grand total of nine schools. (Just for the record, those schools were Loyola, Glenbrook North, Lake Forest, New Trier, Evanston, Hinsdale Central, Oak Park, Barrington, and Maine South).

Brooks was fortunate to get instruction from one of the few Illinois D1 players of that era, Brett Williamson. Williamson was part of the now-defunct Division 1 program at Butler.

But by his own admission, without the benefit of a post-grad year at a New England boarding school, Brooks probably would have ended up in on a D3 team—and playing soccer.

By his own account, that extra year, spent playing on a different stage, made a huge difference in raising his recruiting profile—as post-grad stints continue to do for many high school players in non-hotbed areas.

Even so, Brooks admits to having to surmount a steep learning curve in adjusting to the D1 game, especially its speed and skill level. Just the size of D1 crowds alone can be intimidating.

Matt Harris, also included below, has mentioned the jolt of stepping on to the field as a freshman at Virginia in front of over 14,000.

And although the profile of Illinois lacrosse has been raised by the dozens of players on current rosters—and certainly by the players recognized below—it still seems a lot more possible for an Illinois recruit to get overlooked than a comparable player from, say, New York or Maryland.

For instance, Cole Blazer (Libertyville), who starred at Marquette in goal and was ultimately taken in the 2018 MLL draft, arrived on the Milwaukee campus as a walk-on.

Perhaps the most impressive achievement of Brooks’s career was winning the 2008 MacLaughlin Award as the nation’s top midfielder. In doing so, he’d beaten out one of the game’s most celebrated players, Paul Rabil of Johns Hopkins.

Still arguably the best lacrosse talent to emerge from Illinois, Brooks was a high school All-American and Illinois Player of the Year at Libertyville.

Brooks went on to play on two national championships at Syracuse. In his senior season (2008), he was selected as a USILA First Team All-American, having been an Honorable Mention All-American the previous season.

Brooks has played professionally in the MLL, playing on two MLL championship teams, and beig recognized as a league All-Star selection three times. He now plays in the Premier Lacrosse League. The driving force behind the PLL was his former opponent and rival, Paul Rabil.

Duboe entered in 2006 Harvard from Adlai E. Stevenson High School, where he played both hockey and football (and in which he was an All-area selection).

A two-year lacrosse captain at Stevenson, Duboe, a middie, would be the first lacrosse player to be recruited from the school.

Duboe would go on to Harvard, where he played under current Maryland coach John Tillman. He received All-Ivy First Team honors in his sophomore year (and Second Team in his junior year).

During his collegiate career, he was also twice recognized with inclusion on the Tewaaraton Award Watch list, selection to the NEILA All-New England first team, and as a finalist for Lowe’s Senior CLASS Award, honoring both athletic and academic achievement.

Duboe also played professionally in both the MLL and the NLL.

Kelly began lacrosse only in his sophomore year of high school, and then only as a result of a football injury. (By the time he left New Trier, the 225-pounder had set school records for rushing and touchdowns; he would also be chosen conference player of the year—edging out eventual Steeler running back Rashard Mendenhall, who played at West Niles).

Turning down overtures from several Big Ten football programs, Kelly accepted instead a scholarship offer from coach Dom Starsia to play lacrosse at Virginia, where he became the first freshman in school history to start every game.

Kelly played professionally for the Minnesota Swarm in the NLL.

Harris divided his time between close defense and LSM, ending his career at Syracuse at the program’s ranked #2 all-time in caused turnovers.

Harris has played professionally with the MLL’s Florida Launch.

Yes, Neufelt played three years out-of-state at Culver Military Academy, a college prep school located in northern Indiana, where he joined a list of UA All-Americans that now includes Zach Currier, Joel Tinney, Ethan Walker, Matt Schmidt, and Jackson Reid; and he not only played lacrosse at Culver but varsity football and hockey as well.

But Neufeldt grew up in Naperville and had significant lacrosse ties there.  Like many eventual D-1 players in the area, he was, for instance, a member of the Fox Valley Lacrosse Club.

Neufeldt played LSM for two elite D-1 programs. At Maryland, he was part of a national championship team in 2017 and that season was also recognized as an Honorable Mention All-America (USILA and media).

He received Honorable Mention All-America (media) honors in 2018, and was also selected to the Big Ten All-Tournament Team.

An injury entitled Neufeldt to a post-grad year of eligibility, which he spent with the Denver Pioneers in 2019. At the conclusion of that season, he was selected to the All-Big East Second Team.

Neufeldt now plays for the Denver Outlaws of the MLL.

Mike Law of Colorado was one of the first two lacrosse players born west of roughly Buffalo to be selected for Team USA .

The other was Todd Rassas.

A graduate of Loyola Academy, Rassas was a member of the first Notre Dame team to win an NCAA tournament game (a 12-10 upset of Duke in ’95).

A three-time USILA All-American at defense with the Irish between ’95-’98, he was  selected for the U.S. national team competing International Lacrosse Federation World Championship in 2002. He was one of only seven players from the 2002 squad to selected again in 2006.

Rassas also played a year in the MLL. Like Colorado’s Christian Cook of Princeton, he is another lacrosse defenseman who went on to work for the Secret Service.

A ’95 graduate of New Trier, Bell was a Third-Team All-American at defense on a Georgetown team that went to the tournament’s Final Four.