You are here:
CALIFORNIA

California is by no means a traditional hotbed for D1 lacrosse.

There isn’t a single D1 lacrosse program in California.

And it wasn’t even until that year, 2005, that Hopkins, for instance, even recruited its first Californian (Rancho Bernardo High School’s Matt Drenan); Hopkins then took its time before landing its next one (high school class of 2020’s Chase LiDrido).

All of which is true…

But if the first D1 games wasn’t even played in the state until 2005, by the time the game was played it featured, tellingly, authentic native Californians. 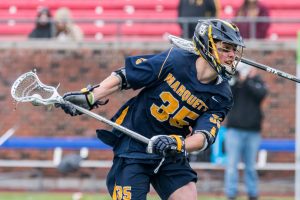 Peter Henkhaus of Palos Verdes, one of over 150 Californians on 2020 D-1 lacrosse rosters. (Photo for LaxAcrossAmerica by Tom Marvin/Alliance Photo Studio)

Its opponent in that game, Syracuse, featured Sean McGonicle (La Costa Canyon) and Jake Myers, who played at Torrey Pines.

The previous year Torrey Pines had taken down Long Island colossus Garden City, a victory that arguably may have done more to establish California’s D-1 credentials than anything occurring at the college level.

The almost universal perception until then, as sportswriter Kevin Gemmell once put it, had been that “Southern California was producing lacrosse players the way Nebraska produces surfers”.

And if you didn’t see many Californians playing for The Hop, you could hardly blame Matt Drenan out of Rancho Bernardo.

After all, Drenan started at close defense from the season opener his freshman year at JHU (the first to do that since Chris Watson in ’02), and was widely considered to be the best defenseman on that team (a team that would go on to win the NCAA title the next year, which Drenan had to sit out due to a knee injury).

And if Hopkins missed out on a number of top-level California players like Rob Emery, Roy Lang, Will Yeatman, Anthony DeMaio etc., so what? That was clearly JHU’s loss.

And, after all, that’s just Hopkins.

Other schools hadn’t been so slow off the mark in attracting California talent.

As of 2020 there are 163 Californians on D1 college lacrosse rosters.

So in 2020, if we can’t say California is a traditional D1 lacrosse hotbed, we can at least by now say that it’s an established one. 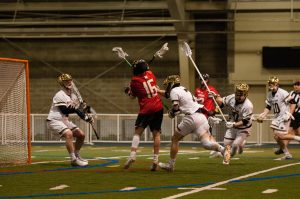 The Military’s Role in Seeding D-1 Lacrosse in California

The storylines below feature some names and places—Ho Chi Minh, Iraq, Afghanistan, Hanoi, the CIA, the OSS—not commonly associated with college lacrosse.

Their presence reflects the considerable role of the military, in California as well as some other states, in growing the sport of lacrosse.

Dennis Yeatman, for instance, is the father of D1 players Jack, and Will, listed below.

Yeatman is also a retired Navy commander, who played D-1 for Annapolis, and he exemplifies the extraordinary contribution of the military in promoting the game of lacrosse in California, and nurturing top-level talent in the state.

In the 60’s, the service academies produced a disproportionate amount of the nation’s elite college players.

After all, they constituted half of the revered so-called Big Four that then dominated college lacrosse: Johns Hopkins, Maryland, Army, and Navy.

This was also a time before military service was not voluntary, with a draft fueling fully-manned forces.

Both Army and Navy personnel served at Marine Corps Base Camp Pendleton, the nation’s busiest military base, located about 40 miles north of San Diego.

Marines seeded the game’s growth in San Diego and Claremont, which came to be known as the “cradle of lacrosse in California”.

In 1963, one of the first games played by the fledgling Palo Alto Lacrosse Club—a predecessor of Stanford’s team—was a road game at Camp Pendleton, against a marine team.

Stationed at was then March Air Force Base in Riverside Country, Lt. Peter T. Faulkner, a 1965 graduate of Yale, where he’d played lacrosse, helped found the Riverside Lacrosse Club. Faulkner was also instrumental in forming youth programs in Menlo Park.

The founders of the San Francisco Lacrosse League, providing youth coaching and games for San Francisco and Marin County, were both former Naval Academy cadets and lacrosse players.

The military’s contribution has continued to be felt over the years.

And when Spencer Wright (see below) was contacted by Syracuse, it was only after the staff had been tipped off about the Junipero Serra middie by former SU captain John Windship—also a coaching assistant and naval officer.

Though his very name suggests some laughably formulaic and overblown caricature of a fictional action hero, Denver was, and is, the real deal.

Denver was not only a Navy SEAL but also the former Head of Basic and Advanced SEAL Training, and led a number of special-forces operations in the Middle East, Africa, and Latin America—experiences recounted in his book “Damn Few”.

The movie grossed $70 million in its initial box office run.

He is also the recipient of the Bronze Star with Valor, three Navy Commendation Medals, and three Navy Achievement Medals.

After attending Palo Alto High and playing for the Tomahawks, a local club team, Denver went on to Syracuse, where he was a part of national championship teams in 1993 and 1995.

A captain of the Orange his senior year, he was also an Honorable Mention All-American at LSM and close defense.

How can you not include on this list a guy who celebrates his team’s national championship victory draped in a California state flag?

That victory over Princeton was one of two national championships Wright won with the Orange.

A first-line middie in his junior year, the San Diego native, and Junipero Serra grad, was a Second Team USILA All-American as a senior.

Following a 6-year career in the MLL, Wright coached at Fieldston School in New York City, and D-1 Manhattan, and in 2019, joined the staff of the lacrosse program at IMG Academy in Florida (whose director is fellow Syracuse star Tom Marechek).

Hingten was among the first Californians selected as a UA All-American, playing for the South in the inaugural Under Armour All-American Classic held in Towson, Maryland in 2006 (alongside Will Yeatman of Rancho Bernardo).

A second team All-Ivy selection at defense in his sophomore and junior years, Hingtgen received first team All-Ivy and All-New England, and honorable mention USILA All-American in his senior year.

At 6’6’, 260 pounds, Will Yeatman hardly looked like a prototypical attackman, resembling more at first glance an NFL lineman—something which he ultimately became.

That lineage goes as far back as the 1950’s and Jim Brown (arguably one of the all-time best in both sports), all the way through to Chris Hogan (who, like Yeatman, played in the 2006 UA All-American Classic), and, currently, to aspiring QB Jared Bernhardt.

After a star-crossed stint doing double duty in the two sports with the Irish, Yeatman transferred from Notre Dame to Maryland.

In his freshman year with the Irish, Yeatman had been selected First Team All-Great Western Lacrosse League, GWLL Newcomer of the Year, and Laxpower’s Rookie of the Year.

His time with the Terps was marked by several injuries; and if he didn’t exactly fulfill those early expectations, he demonstrated frequently enough why they’d been warranted—as he did scoring three goals in a span of 5:47 against Georgetown his senior year.

Still #6 on California’s all-time scoring list, Yeatman did a lot to raise the profile of California lacrosse.

A Mill Valley resident, Lang was a two-time All-American at Saint Ignatius, and 2008 selection as a UA All-American.

At Cornell, Lang was twice selected All-Ivy first-team at midfield, and receiving All-American honors twice, first-team in 2011, and third-team in 2012.

Lang (along with Alex Capretta, an eventual teammate at SI and on the South Marin Lacrosse Club, and opponent at Princeton) had been introduced to lacrosse by his father, Steve, who had played at Princeton in the late ‘70’s.

Lang was additionally a 2012 Tewaaraton Award nominee, and the 11th overall pick in the Major League Lacrosse draft.

Even 10 years ago, Rob Emery was the rare West Coast player who began his lacrosse career squarely on the D1 radar—though with a huge assist from his head coach at Saint Ignatius, Chris Packard, a Long Island native and former player at Cornell.

Packard, still the head coach at SI and also a director of the highly regarded Bay Area club program the Alcatraz Outlaws, put in a word to get Emery an invitation to the Nike Blue Chip Camp in Baltimore.

By the time entered Virginia in 2011 Emery was an Under Armour All-American, and rated as the ninth-best overall recruit by Inside Lacrosse.

A USILA All-America honorable mention in both his junior and senior years, Emery finished his career as the Cavs’ 9th all-time leader among middies in goals (73), and 11th in total points (96).

Goss’s inclusion on this list may initially raise eyebrows.

After all, the San Francisco native emerged not from a Bay Area stalwart like St. Ignatius, but from Deerfield, the Massachusetts prep school and nationally-recognized lacrosse power.

But Goss is very much a Bay Area product in some important respects. Influenced by friend and classmate Will Emery (brother of Rob, see above), Goss began playing at the youth level under the coaching of Matt Ogelsby (former player at Duke).

Goss heads into his senior year at Brown as a two-time Honorable Mention All-American selection, a First Team All-Ivy choice in 2018, and Second-Team in 2019.

In an otherwise breezy, optimistic recap of a Boston University recruiting class, you’ll find this painful aside: “As previously noted, a verbal commitment isn’t set in stone, as the Terriers already lost Anthony DeMaio to Maryland, who would have been a program-changing recruit”.

No doubt. …DeMaio left Coronado High School with a state-record 391 career points (a mark since eclipsed by Kevin Groeninger, who entered Bryant in the fall of 2019), and made good on his promise in his sophomore year with the Terps.

A 2019 USILA Honorable Mention All-American selection at middie, DeMaio had a total of 46 points on 28 goals and 18 assists last season, including a 4-goal performance against eventual national champion Virginia in the NCAA Quarterfinal, and three goals in the first quarter against North Carolina.

In his capacity as an intelligence officer with the Office of Strategic Services (OSS) during World War II, Grelecki worked extensively behind enemy lines aiding Chinese guerillas fighting the Japanese.

In August of 1945,Grelecki parachuted into Hanoi as part of a reconnaissance mission to determine the intentions of Vietnamese leader Ho Chi Minh, then trying to shake off French colonial rule, but still friendly to the U.S. (he had served as an American agent during the war).

As one of only a handful of Americans to meet Ho, Grelecki figures prominently in a BBC documentary detailing the mission, “Uncle Ho and Uncle Sam”.

On returning to the States, Grelecki would be become one of the first agents for the OSS’s successor, the Central Intelligence Agency, and helped to write the new intelligence service’s charter.

Grelecki was also a lacrosse player. He’d grown up in Baltimore, attended City College High School, and then went on to Maryland on an academic and athletic scholarship.

He was an All-American for the Terps during the 40’s. After moving to California in the 50’s, Gralecki promoted the sport in a number of ways. He started the Northern California Lacrosse Association in 1963, as well as the San Francisco Lacrosse Club.

Grelecki even helped stage a lacrosse exhibition at Kezar Stadium during halftime of a 49er game. Grelecki’s more enduring legacy is the UC Davis club team , which he started in 1972. The program, which was officially recognized by the school in 1979, is now part of the WCLL.