You are here:
KENTUCKY 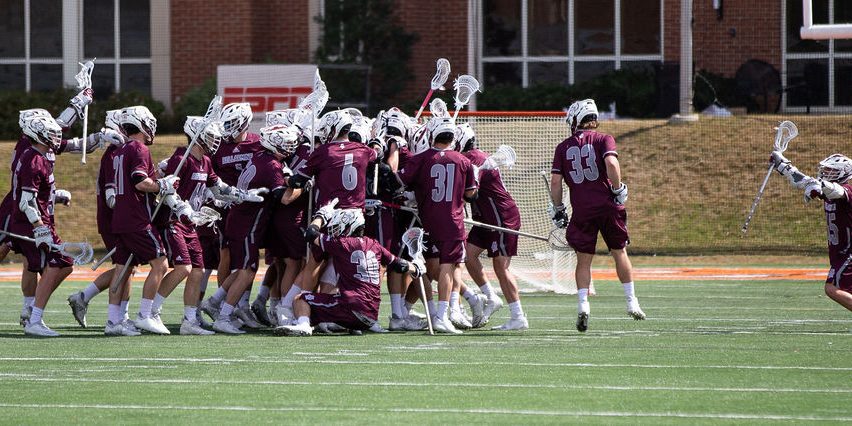 They actually play lacrosse in Kentucky?

As a matter of fact, they actually play Division 1 lacrosse in Kentucky.

The fact that this isn’t widely known, even among many knowledgeable college lacrosse fans, is telling—and unfortunate.

And also Kentucky tends to be discarded as a regional laggard in lacrosse, in comparison to neighbors like Indiana, Tennessee, Illinois, and especially Ohio.

This post will provide a slightly different take on a report in Lacrosse Bucket about two promising Kentucky recruits committing to Bellarmine.

It will focus also on Bellarmine, and why the addition of these recruits would have special meaning for the only Kentucky-based team in Division 1 lacrosse.

It will also focus more generally on Bellarmine, and the state of the lacrosse in the Bluegrass State. 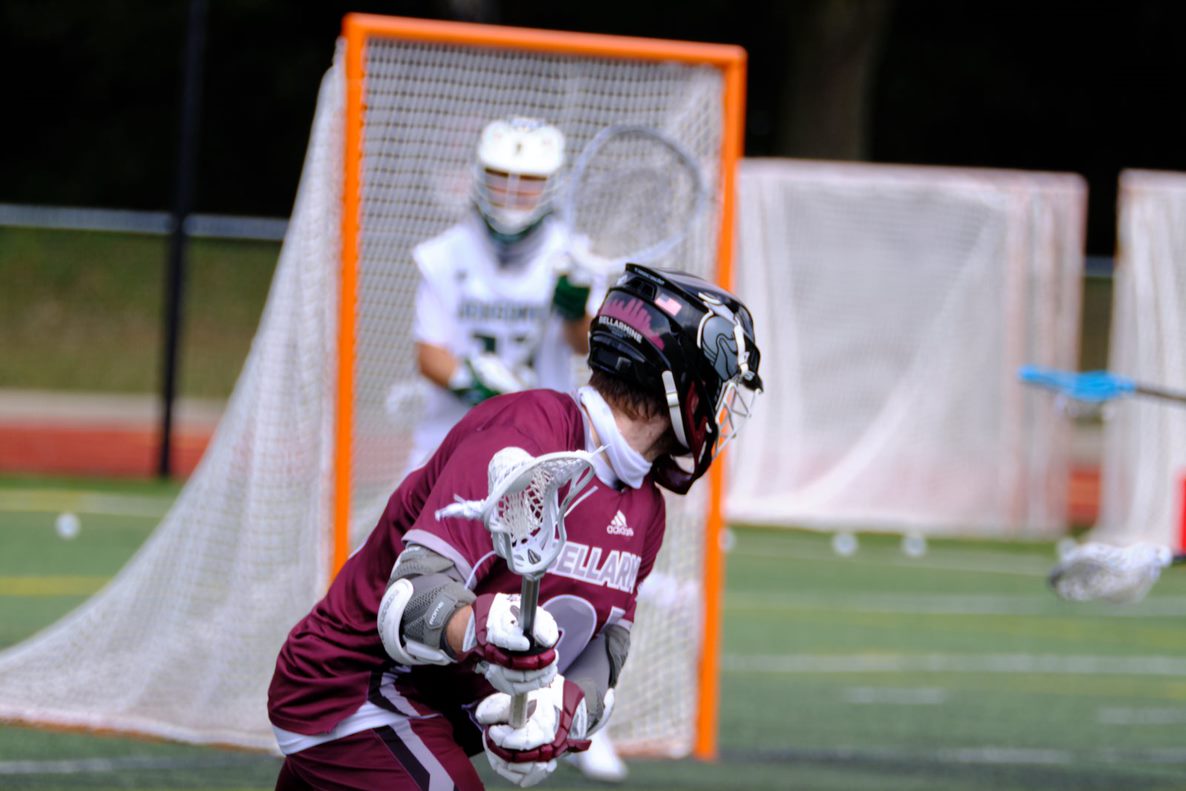 Ohio recruit Landon Trout, out of Columbus and Pickerington North, takes aim in the Knights’ February 10th, 2021 game at Jacksonville. Louisville-based Bellarmine has had a D1 lacrosse program since 2005. (Photo for LaxAcrossAmerica by Marcelo Murillo)

You’d assume that a university based in Louisville would inevitably have a longstanding Division 1 basketball program.

Actually it’s D1 basketball, rather than lacrosse, that’s the relative newcomer at Bellarmine. 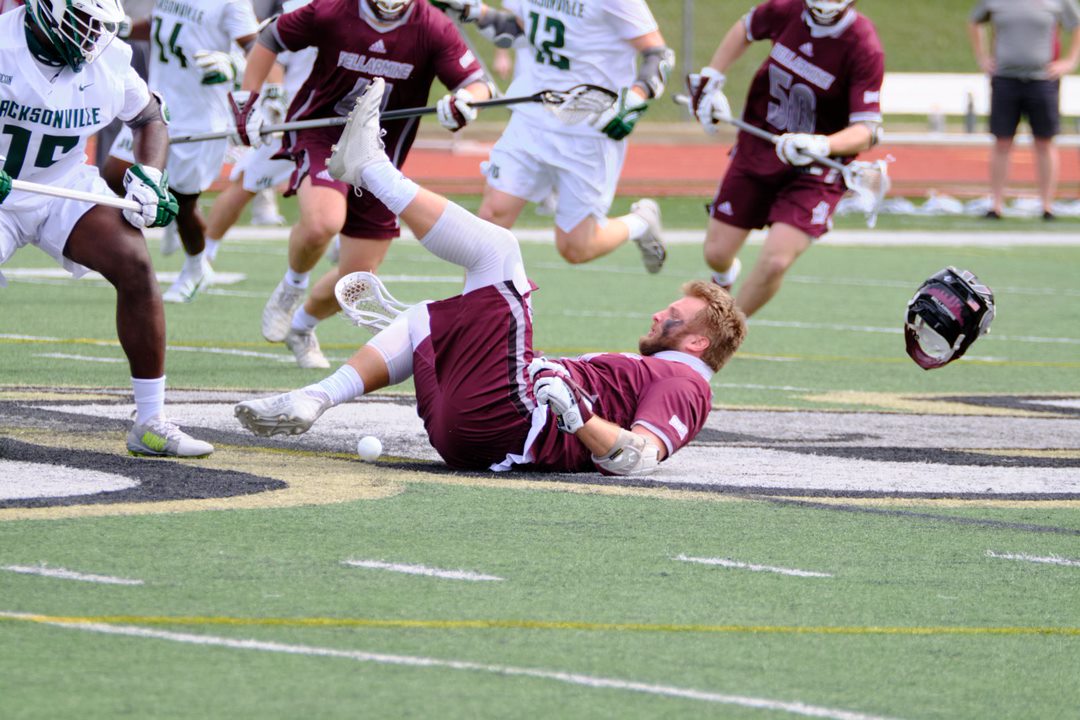 Bellarmine senior middie Blake Roshkowski, a local recruit out of regional power St. Xavier in Louisville, loses his still-airborne helmet in a hit against Jacksonville. (Photo for LaxAcrossAmerica by Marcelo Murillo).

(The Bellarmine Knights did win a national championship in basketball in 2011—but it was at the D2 level. They’d been scheduled to kick off their D1 program before Thanksgiving this fall. But after several COVID-related cancellations, the Knights as of now are scheduled to make their debut in what, with a crowd, would’ve ordinarily been the ultimate baptism by fire: as the visiting team at Duke’s Cameron Indoor Stadium).

By contrast, 2021 will mark Bellarmine’s 17th season of Division 1 lacrosse. 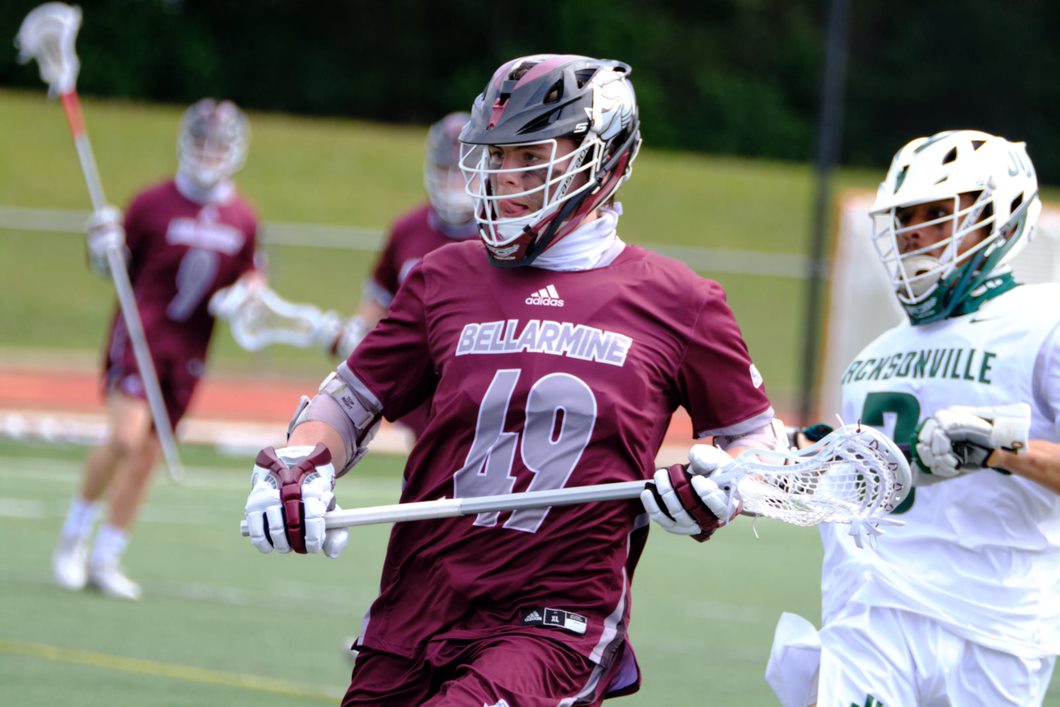 Canada has been a longtime source of talent for Bellarmine. Dylan Tulett, a midfielder shown here in 2021 against Jacksonville, player for Ontario power The Hill Academy, and is one of 5 Canadians on the 2021 roster. (Photo for LaxAcrossAmerica by Marcelo Murillo)

But like a lot of schools breaking into D1 without the benefit of a robust, established club program (think Michigan), they’d eased into D1 with a schedule heavily diluted with opponents from D2 and D3.  Their opponents ran the gamut from VMI and Wagner to Wittenberg, Oberlin, and Catawba.

In more recent years competing in the Great Western Lacrosse League, then the  ECAC, and now the SoCon, the program has struggled.

In the 9 full seasons since they went 9-6 in 2010 (beating Hobart, Air Force, and Ohio State in the process), Bellarmine has had a winning record only once.

And while the Knights have stagnated, their rivals in the Southern Conference haven’t. 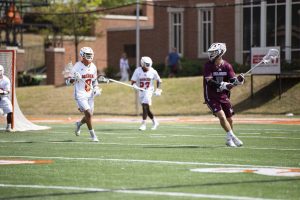 Morgan Macko, out of Brother Rice in Michigan, is precisely the kind of out-of-state talent Bellarmine has successfully recruited. (Photo for LaxAcrossAmerica by Matthew Pendry/PendryPhoto).

The Unique Challenges of Bellarmine Lacrosse

An obvious part of the problem is the lack of depth of D1-calibre talent in the state to begin with.

Again, you only have to look at Kentucky’s neighbors.

Headed into the 2020 season there were over 80 players from Ohio on Division 1 lacrosse rosters.

Tennessee had 16; yet another neighbor, Indiana, had 13.

Granted, 4 out of those 6 stayed home to play with the Knights—impressive on a percentage basis but seemingly nowhere near critical mass.

Bellarmine Lacrosse and its D1 Twin: A Revealing Comparison

You can begin to see how meagre Bellarmine’s instate recruiting numbers are when you compare them to a program with a strikingly similar profile: Detroit Mercy.

Both are Catholic institutions located in urban areas with comparable enrollments (4,900 for Detroit Mercy, about 4.000 for Bellarmine).

Detroit Mercy began its D1 lacrosse program in 2009; Bellarmine began its in 2005.

But there’s at least one place where you’ll find a numbers disparity.

Detroit Mercy had 22 Michiganers on its 2019 roster.

How many Kentuckians were on Bellarmine’s in 2019?

Granted, 2018-19 was an especially turbulent period for the Knights, involving the dismissal of a coach rumored to have been at odds with players for some time. Instability and unpredictability aren’t exactly conducive to effective recruiting.

But the same were pretty much the same the year before.

And the pattern has held in the last couple of years. In 2020 there were 4 Kentuckians on the Knights roster as opposed to 22 instate recruits for the Titans. The rosters for the upcoming 2021 season show the pattern: 4 vs. 25.

Though the Knights have an all-time winning record against Detroit Mercy (7-5), they’ve dropped the last 6 games in the series. The broader point, though, is that Bellarmine has been forced to rely a lot more on out-of-state recruitment than a program that otherwise is almost identical. 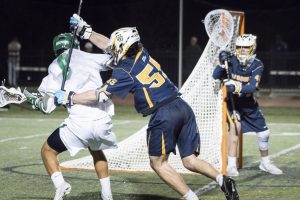 Baltimore’s John Hulsman had been a First-Team All-Southern Conference selection at Bellarmine as a freshman. He’s seen here in goal for Marquette, where he’d transferred following that season. (Photo for LaxAcrossAmerica by Marcelo Murillo)

And Bellarmine has done a pretty effective job recruiting out-of-state talent over the years.

The greater challenge for the Knights has been retaining that talent.

In 2019, for instance, freshman Riley Seay out of South Carolina power Oceanside led Bellarmine in both total points (39) and goals (30). He was also named the Southern Conference Freshman of the Year, and made a second-team All-SoCon selection.

But Seay played the 2020 season on the second midfield line—at Loyola.

Similarly, the Knights will begin 2021 will begin play without their star Morgan Macko. Macko will be joining Marquette in 2021 as a graduate transfer, making use of a Covid-related exemption granted by the NCAA to 2020 seniors.

Macko’s absence will be felt. He’d followed his brother Graham to Bellarmine from one of the Midwest’s premier high school lacrosse programs, Brother Rice, located in the Detroit area.

In 4 seasons, Macko compiled 61 goals and 33 assists. Even factoring in the foreshortened 2020 season, that point total was enough to place the two-time team captain third on the Knights all-time list.

It’s interesting to note that Macko’s transfer comes on the heels of another former Bellarmine star ending up with the Golden Eagles in Milwaukee.

In 2019, Baltimore’s John Hulsman had been a first-team All-SoCon selection at goal as a freshman before transferring to Marquette in 2019. Hulsman started 11 out of 14 games for Marquette in 2019, recording 12 saves in 9-8 win over Georgetown and 11 each against Duke and Denver. 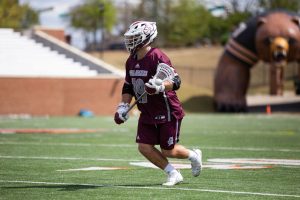 Riley Seay, recruited by Bellarmine out of South Carolina power Oceanside, found a spot on the second midfield in 2020—but with Loyola. (Photo for LaxAcrossAmerica by Matthew Pendry/PendryPhoto)

All of which leads us back to our starting point here: the significance of Bellarmine making inroads in the recruitment of top-shelf, in-state talent.

The three players represent the twin totems of Kentucky high school lacrosse: St. Xavier and Trinity—both located in Louisville. (The two schools met in the most recent Kentucky Scholastic League Title game in 2019, with St. X winning its second consecutive championship and 12th overall since the program’s inception in 2001). 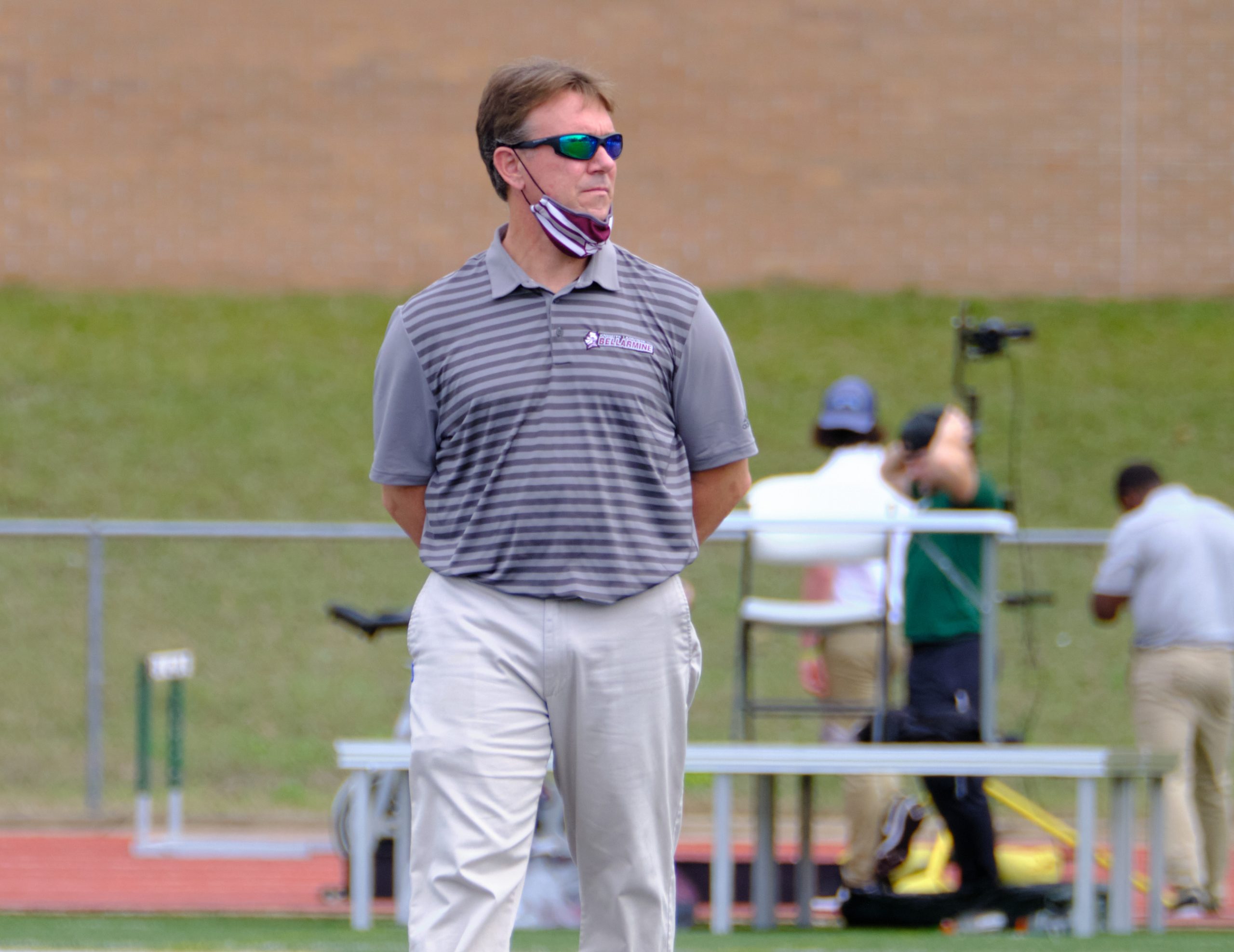 Bellarmine head coach Andrew Whitley preparing for a 2021 game vs. Jacksonville. Whitley’s previous collegiate experience included stints at Yale, Wesleyan, and as a longtime assistant at Fairfield. (Photo for LaxAcrossAmerica by Marcelo Murillo)

The three recruits, all attackmen and all members of the class of 2021, are Gavin Noland, Ben Hubbs, and Hillis Burns. Burns, who plays alongside Hubbs at St. “X”, has committed to Air Force (among his accomplishments off the field, Burns recorded a perfect ACT score).

Hubbs and Noland are the Bellarmine commits. Both also play with the Louisville-based club team L4 Elite.

A versatile lefty with a hard shot, Hubbs could either play attack or middie; a righty attackman, Noland is a skilled dodger and finisher.

But Has Kentucky Ever Even HAD a Top-Shelf D1 Lacrosse Recruit?

The focus on in-state talent in Kentucky leads to the inevitable question of whether the state has ever produced a legitimate D1 star.

The answer is: yes.

The best D-1 lacrosse player to have emerged from Kentucky was also the state’s first.

Chase Carraro played just before an elite group of D1 players would begin to bring overdue attention and prestige to a position that had almost dismissively known as “face-off specialist” or “FOGO”.

If Carraro didn’t receive the kind of recognition that would later go to players like Denver’s Trevor Baptiste, Yale’s T.D. Irelan, Sam Talkow  (Boston University), and Ben Williams (Syracuse), his impact was as unmistakable.

Carraro had won two state championships at St. Xavier in Louisville, and had twice be named All-State and All-American.

2010 marked the addition of another name to the Pioneer program: Bill Tierney. Tierney came to Denver having won 6 national championships at Princeton.

Even in that first season, Tierney had been savvy enough to see possibilities beyond the FOGO role that Carraro had been recruited to fill (and that a player from a non-hotbed state like Kentucky might especially have been limited to). Carraro could also score. In a game against Ohio State, for instance, he won 14 of 20 faceoffs—and also scored a hat trick.

Before moving on to play Major League Lacrosse, Carraro would receive several honors with the Pioneers, including Second-Team All-American, and First-Team All-ECAC. 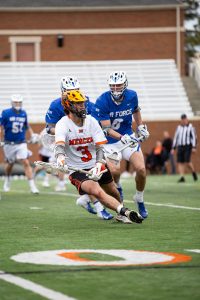 LSM Jeremiah Hemme, Air Force ’19, on defense against Mercer. Hemme is a graduate of Trinity High School in Louisville. (Photo for LaxAcrossAmerica by Matthew Pendry/PendryPhoto)

Lacrosse in the State of Kentucky

The lacrosse scene in Kentucky inevitably begs comparisons with that of its neighbors.

In lacrosse terms, at least, the Bluegrass State looks a lot like a regional laggard. It trails far behind Ohio, and now being eclipsed by Tennessee.

By contrast, Kentucky has only about 32 boys’ programs. It also holds two entirely separate post-season tournaments.

One state tournament, conducted by the Kentucky Scholastic Lacrosse League, consists of 12 teams centered in Louisville and Oldham County.

The other tournament encompasses the rest of the state, and is run by the Kentucky Lacrosse Association.

This two-championship structure isn’t unique to Kentucky. Tennessee, for instance, had two state champions up until the 2102 season.

But the two-champion systems does speak to the dominance of a single urban area—again typical of the pattern of growth in states where the sport is evolving. In the case of Kentucky, it’s the Louisville area, where you’ll find two of the state’s premier powers: Trinity and St. Xavier.

The success of Kentucky teams against regional opponents, especially in the case of Trinity and Saint “X”, has increased the credibility of Kentucky lacrosse.