You are here:
MassachusettsNew England 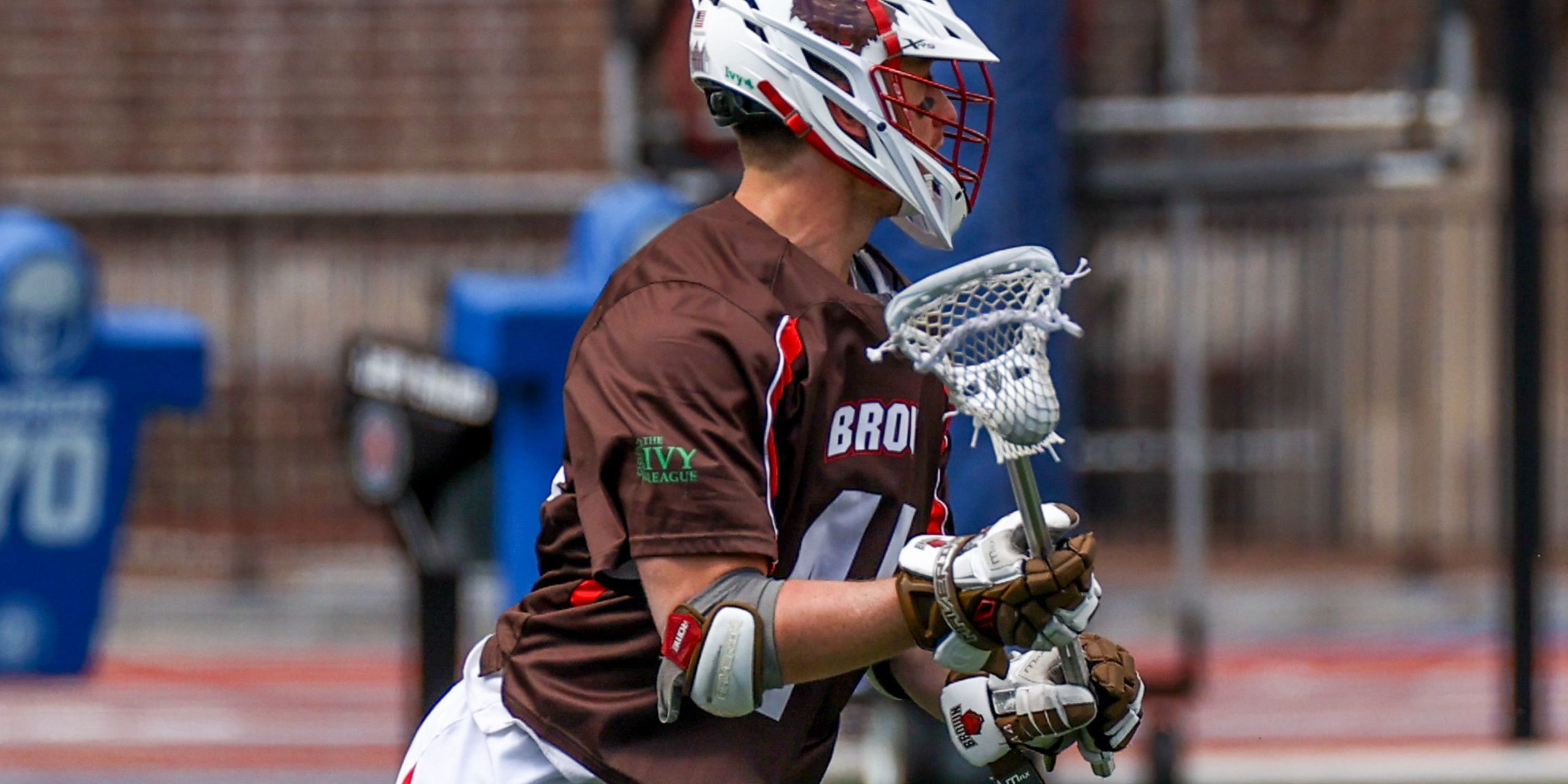 Why include the lacrosse program at Deerfield Academy, a quintessentially leafy and prestigious boarding school located in western Massachusetts, in a site devoted to players and schools outside the sport’s traditional hotbeds?

The answer involves one of lacrosse’s all-time best players.

Actually, calling him that seems a little too dismissive.

He’s been variously described as “the Michael Jordan of his game”, a player who “comes around once in a generation”, and even, by the New York Times, a “transcendent talent”.

So you can imagine the kind of recruiting interest a player like that must’ve generated in high school.

The number of D1 programs chasing that kind of talent would have to be crazy.

And, in fact, it really, truly was.

The number of D1 schools extending scholarship offers to Rob Pannell was …exaclty one.

The D1 college programs courting him began and ended with Quinnipiac.

Which explains how he ended up at Deerfield. 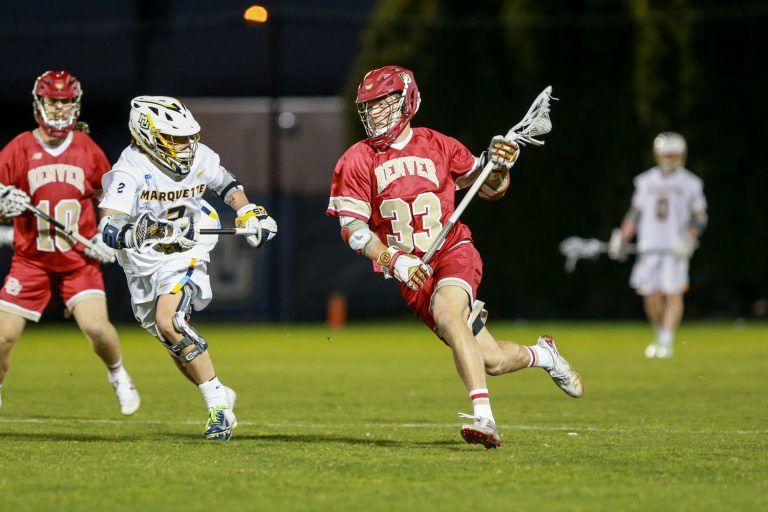 Tucson, Arizona’s Ted Sullivan moves the ball for Denver against Marquette. Both he and his brother Chris (Denver ’20), graduated from Deerfield. (Photo for LaxAcrossAmerica by Justin Casterline).

Rob Pannell had a breakout season in high school.

It just came too late.

By the time he put up 130 points in 2007, his senior season at Smithtown High School on Long Island, the recruitment process was long done.

The Bearcats would not release Pannell from his scholarship. Pannell, largely on the advice of Jim Metzger, his uncle and a former player at Hofstra, opted for a post-grad year at Deerfield instead.

Billy Bitter, another high school star from yet another flagship Long Island program (Manhasset) had just completed a PG year at Deerfield en route to North Carolina. (Billy’s brother, Jimmy, would follow him to UNC after spending three years at Deerfield, during which the team lost a total of 2 games).

Pannell continued to flourish with the Big Green, scoring 99 points in his single PG season, setting a school record—and drawing attention in the process.

(Penn State’s Jeff Tambroni, then the head coach at Cornell, where Pannell would spend his college career, maintains that Pannell was the only player he’d recruited solely on the basis of a highlight video.)

But Deerfield was more than a one-year pit stop for Pannell.

For one thing, he was still playing against top-notch competition.

Deerfield plays an ambitious regional and national schedule which regularly pits it against teams like Salisbury, Taft, and Brunswick (a Fairfield County school that has 6 players on the ’22 Princeton roster alone).

For another, Pannell has also praised Chip Davis, the program’s longtime head coach, something echoed by other PG’s and players.

Despite others who have come to the school from elite high school lacrosse programs, such as the Bitters, and Christian Walsh, who spent a post-grad year at Deerfield after graduating from Boys Latin in Baltimore and before an All-American career at Duke, Pannell’s experience arguably did the most to solidify the school’s reputation for PG success.

It may seem excessive to say, as one writer did, that Deerfield would serve as Pannell’s “launching pad from obscurity to one of college lacrosse’s most dominating players”. Still, had he not taken that post-grad year, his playing career—and life—may have had a different trajectory. 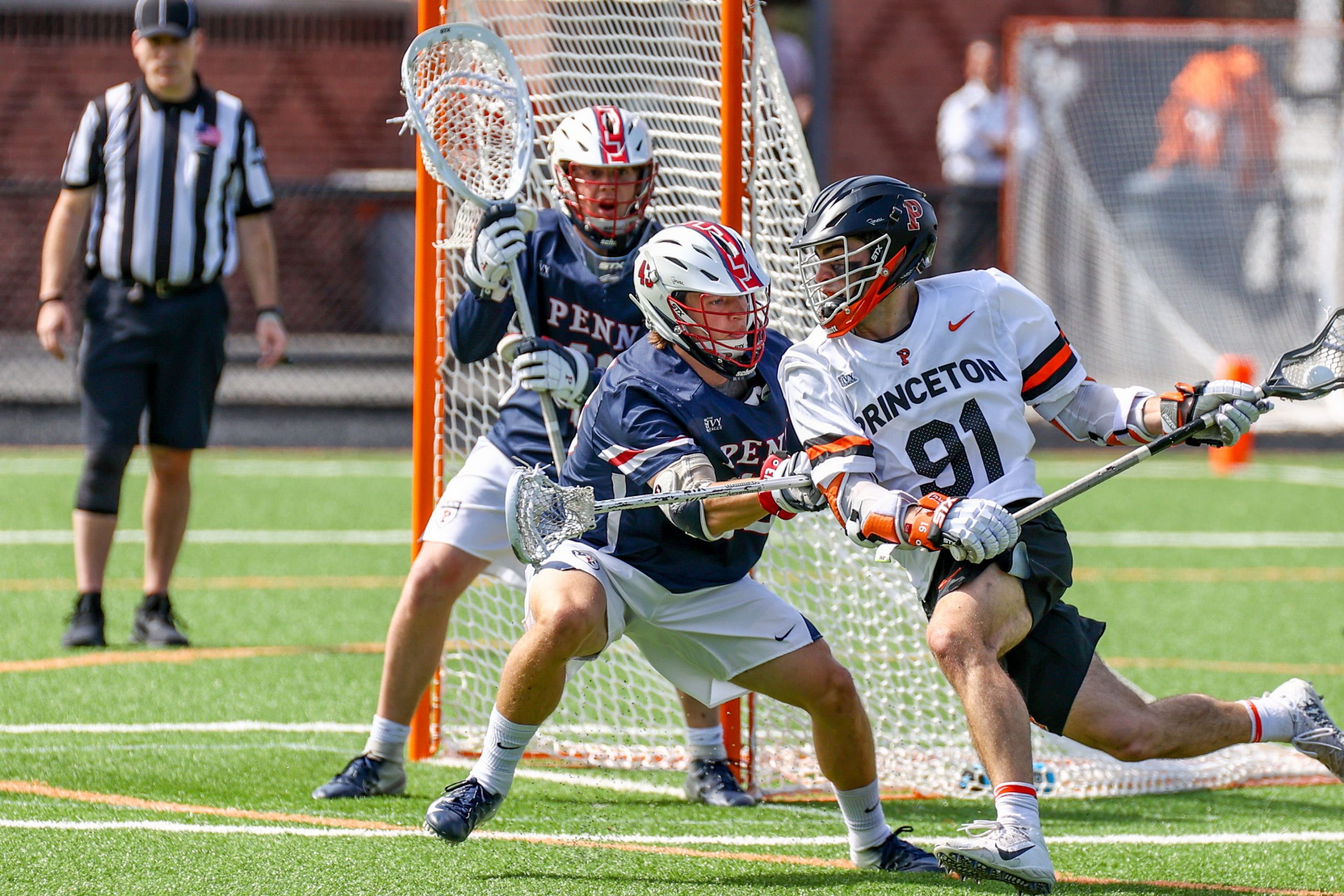 Deerfield grad Theo Lenz on defense for Penn against Coulter Mackesy of Princeton. (Photo for LaxAcrossAmerica by Mike Kruce)

Make no mistake: Deerfield Academy did exist before Rob Pannell arrived on campus in 2007.

And you could see how an institution founded in 1797 might just push back slightly against being characterized as a “lacrosse factory”.

Even a partial list of the school’s graduates over the years provides a hint that there might be something else going on there beyond EMO run-throughs and fast-break drills.

Some are athletes, such as Alexander Killorn, Sam Lafferty, Ben Lovejoy, and Kevin Roy of the National Hockey League, and the NFL’s Hunter Long; but the list also includes: author and Court TV founder Steven Brill, Time Warner CEO Jeffrey Bewkes, “Lost” actor Matthew Fox (a PG), Pulitzer Prize-winning writer and New Yorker stalwart John McPhee (yet another PG), and legendary screenwriter Budd Schulberg (“On The Waterfront“, “A Face in the Crowd“).

Painter Stephen Hannock, whose works hang in both New York’s Metropolitan Museum of Art and the National Gallery of Art in D.C., was also a goalie—and a Deerfield hockey PG.

Though it’s undeniably benefitted from its association with Pannell, the Big Green also had a lacrosse program before he arrived. Between 2000 and 2010, the program was 155-13.

More recently, Deerfield won championships at the National High School Lacrosse Showcase in both 2019 and 2020; in 2019 it defeated in the NHSLS finals Long Island titan Chaminade. 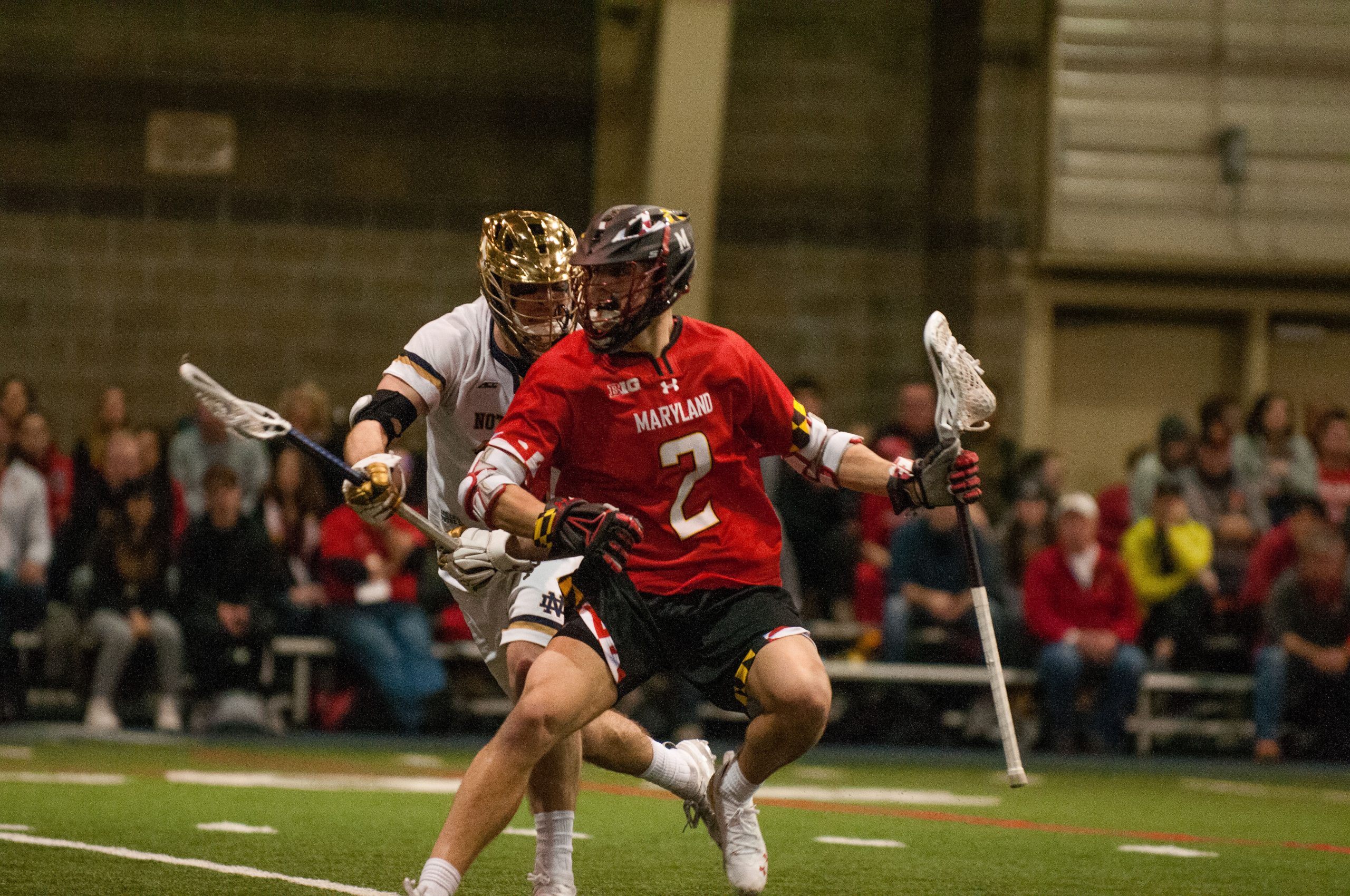 There are 23 Deerfield Academy graduates on 2022 D1 college lacrosse rosters.

What’s especially noteworthy about these players is that a number of them come from areas like Arizona, Florida, and California outside the sport’s traditional hotbeds.

Deerfield is one of a number of schools, including Culver, Avon Old Farms, The Hill Academy, IMG, and Salisbury, that has not only helped students refine their academic and athletic skills, but also helped seed the continued growth of the game in these areas. 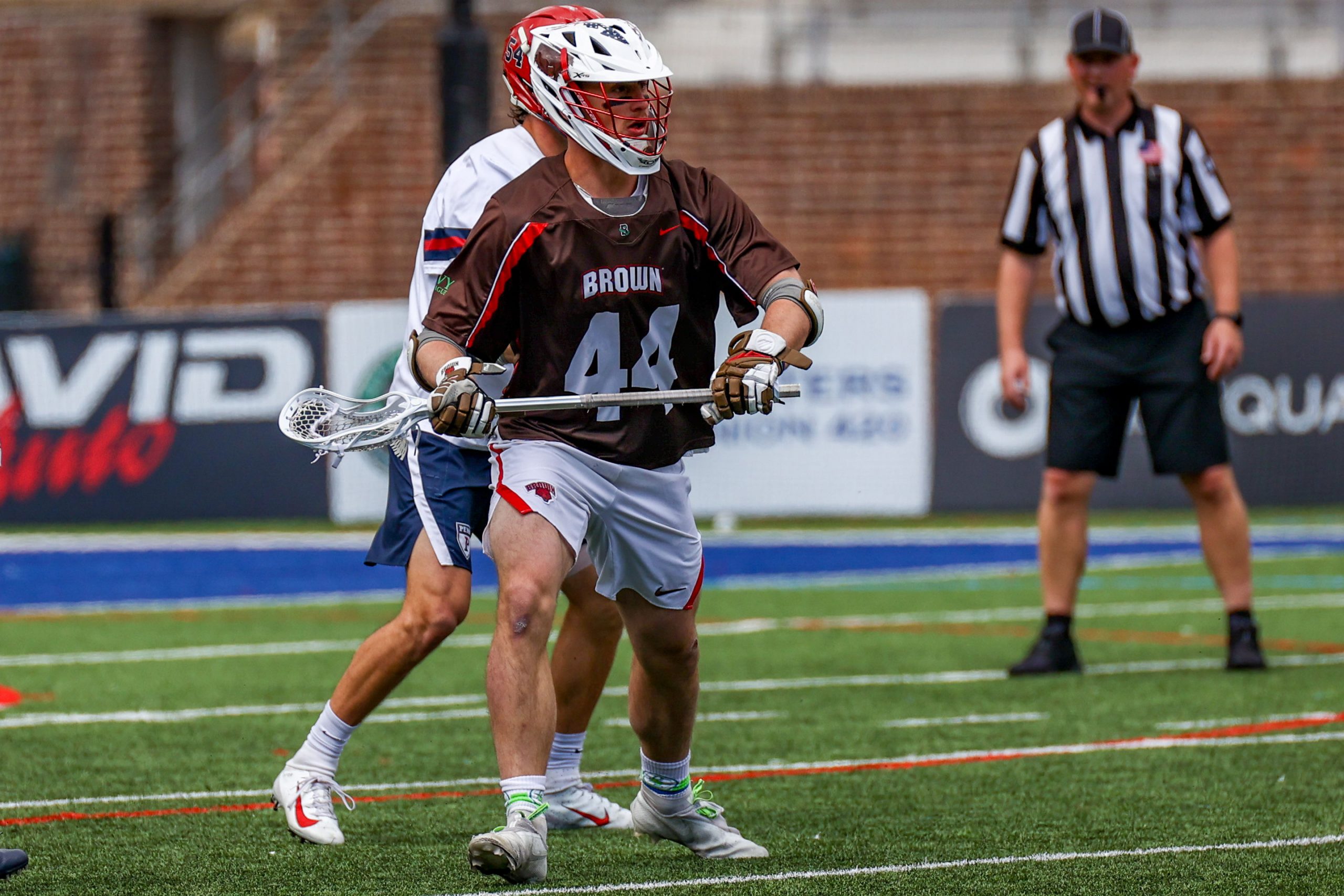 Deerfield grad Nolen Rockefeller in a 2022 between Brown and Penn. (Photo for LaxAcrossAmerica by Mike Kruce)