You are here:
Texas 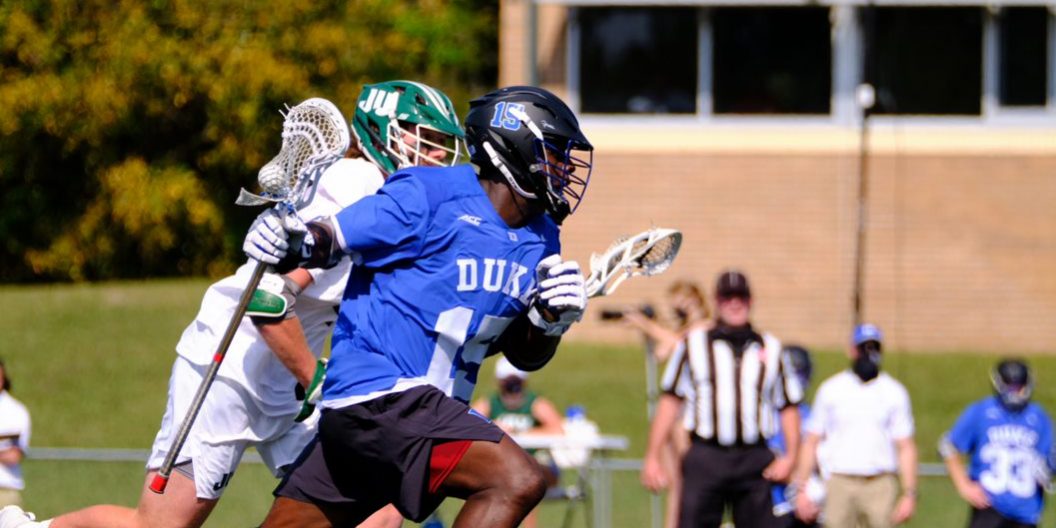 It’s possible that in 2022 the Tewaaraton Award, recognizing the best men’s and women’s college lacrosse players, could be won by players from the same state.

And not only that, it could be that they’re both from the same high school.

So that high school would have to be located squarely in one of lacrosse’s traditional hotbeds—a place like Maryland or Long Island, right?

It’s more than possible. Not one but two graduates of The Episcopal School of Dallas are contenders for the Tewaaraton in 2022.

And at least part of that equation seems like a near certainty.

On the women’s side, ESD alum Charlotte North has already won the Tewaaraton. She’s returned to Boston College for a final season after leading the Eagles to a national championship in the ’21 season. In the process, she scored an NCAA record 102 goals, including 10 in a single game.

Prior to Boston College, North played two seasons at Duke, where the second of ESD’s Tewaaraton candidates is entering his own final season. Nakeie Montgomery, a USILA First-Team All-American at midfield in 2021, was named to the Tewaaraton Award Watch List for the 2022 season last week.

That makes both players more than legitimate contenders for the Award in ’22.

And he isn’t the first to be a credible Tewaaraton candidate. 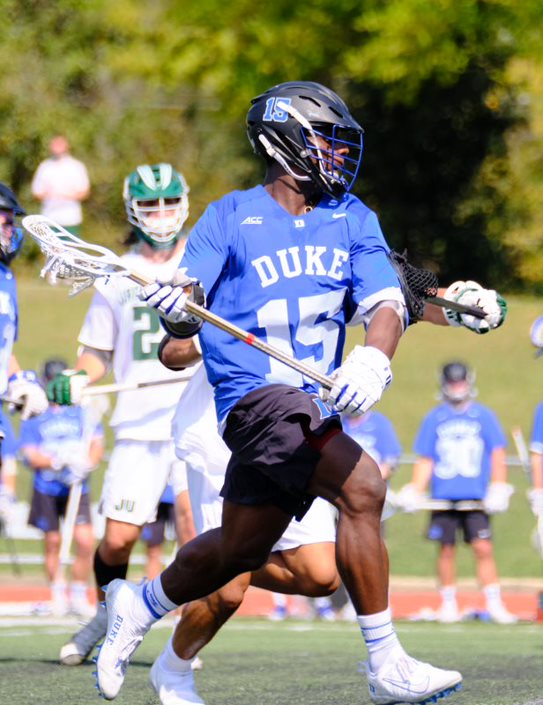 ESD’s Nakeie Montgomery, a Tewaaraton Award candidate in 2022, in action for Duke. (Photo for LaxAcrossAmerica by Marcelo Murillo)

There are currently 99 players from Texas on D1 men’s college lacrosse rosters.

13 are graduates of Episcopal.

5 of those former Eagles are playing in what’s generally recognized as D1 lacrosse’s elite conference : the ACC.

The total number of players is significant, but so is the way they’re distributed throughout D1 lacrosse.

ESD alums are playing in 7 of Division 1’s 11 conferences, in programs as geographically dispersed as Holy Cross in Massachusetts, Bellarmine in Kentucky, and the University of Utah. 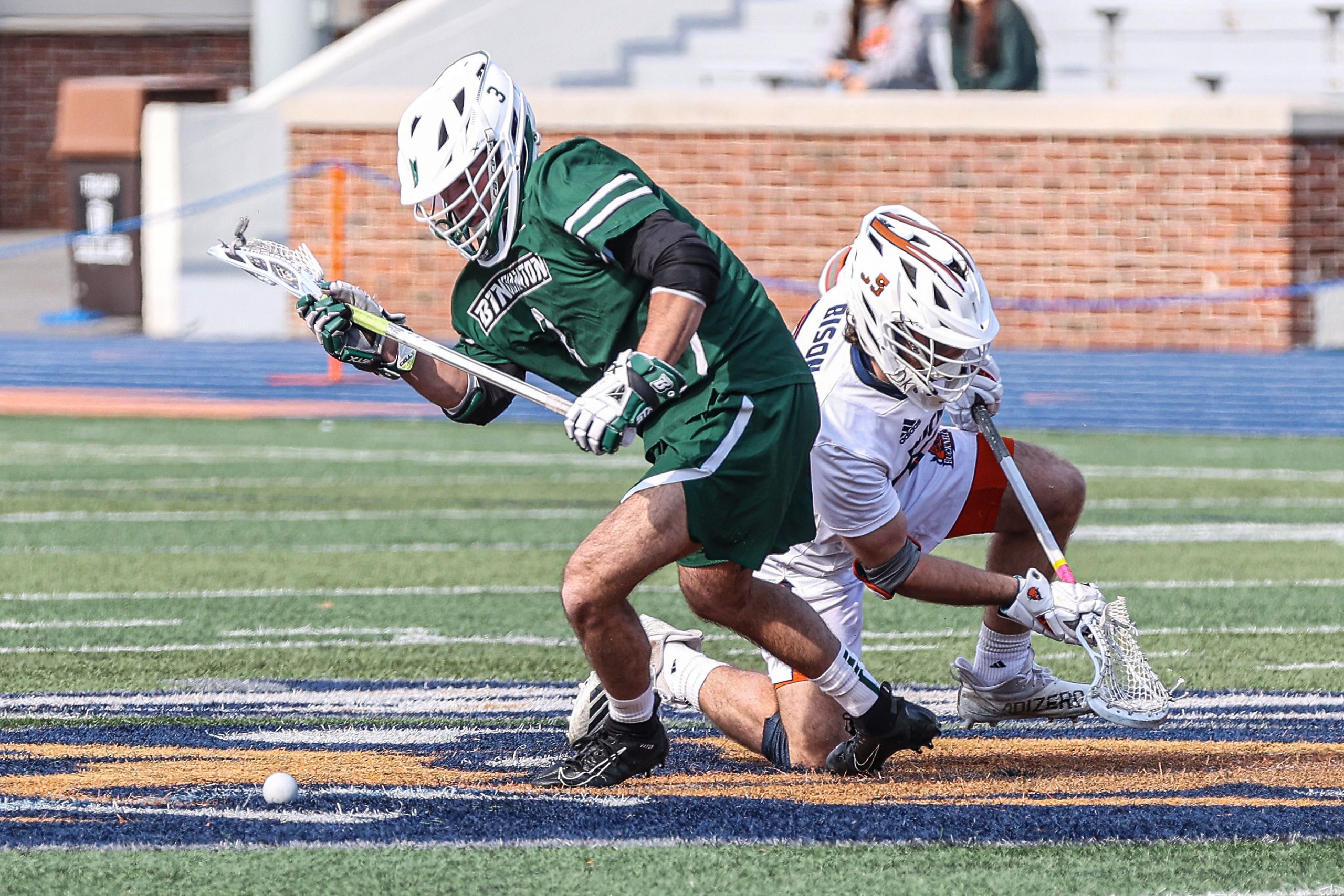 ESD grad Ross Chazanow faces off for Binghamton in a March, 2022 game at Bucknell. (Photo for LaxAcrossAmerica by David Miller)

ESD Lacrosse and The Tewaaraton Award

As with football’s Heisman Trophy, defensive candidates for the Tewaaraton Award are at a particular disadvantage. Their position doesn’t lend itself to some of the alluring numbers that offensive players can banner in their candidacies.

In support of his Tewaaraton bid, Foster Huggins could’ve pointed to a very low, but still very compelling number: 3.

Despite enduring three operations during his college career to repair the same torn ACL in his knee, the ESD grad was a First-Team All-American, and a serious Tewaaraton candidate in 2018, his senior year at Loyola.

As with fellow Texan, Princeton’s Bear Goldstein, Huggins excelled despite being regularly assigned to the opponent’s top attackman; this forced him to go head-tp-head with players like Michael Kraus of Virginia, Shack Stanwick of Johns Hopkins, and Duke’s Justin Guterding.

Originally drafted by the Denver Outlaws of the MLL, Huggins now plays in the Premier Lacrosse League

Foster Huggins’s knee issues can be traced to his high school days, playing not lacrosse but football.

Not surprisingly, there’s considerable cross-over between football and lacrosse in Texas. Nakeie Montgomery, whose father played alongside Michael Strahan at Texas Southern, broke the school record for touchdowns at Episcopal, and had originally been recruited at Duke for both football and lacrosse. Last fall, he finally competed for the Blue Devils at running back.

Football success has not only been a hallmark of ESD grads, but also of most of the top lacrosse players from Texas. Brandon Mullins, for instance, who would go on to win multiple All-American at defense for Syracuse, was also a star linebacker at Coppell.

Chris Hipps, who went on to win a national championship as an All-American defender at Duke, played on three consecutive state championship football teams at Highland Park, and just in his senior season alone caught 86 passes for 1,580 yards and 18 touchdowns.

Drew Wasserman (SO, A, Utah

Some Past Episcopal School of Dallas D1 Lacrosse Players