You are here:
South Carolina 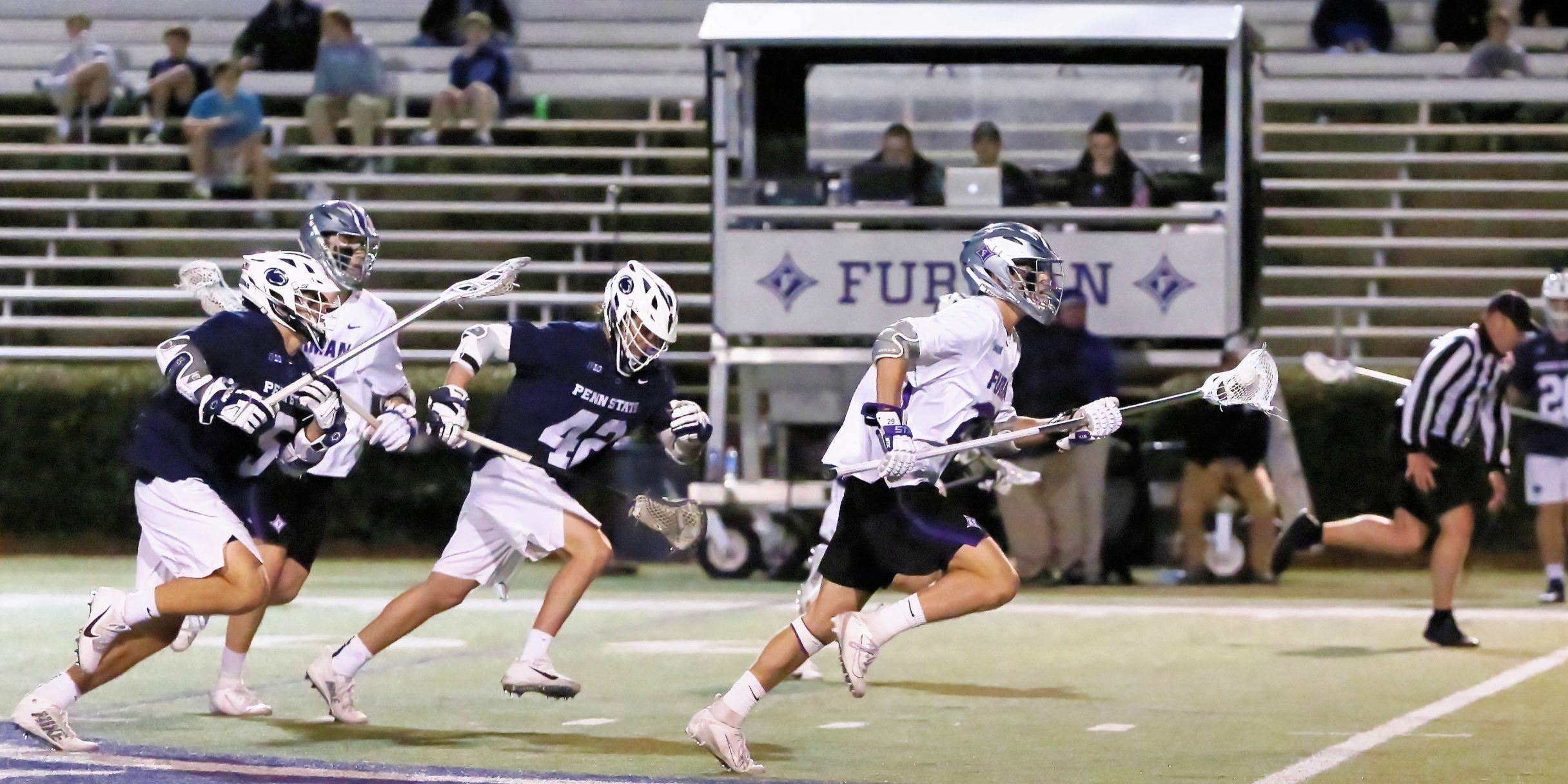 The sole Division 1 college lacrosse program in South Carolina has ceased operations—-for the second time in a decade.

Greenville-based Furman University announced this week the elimination of its men’s lacrosse team, which had played at the D1 level since the 2011 season.

South Carolina’s only other D1 program was launched by Presbyterian College in 2006, and shuttered after the 2010 season. 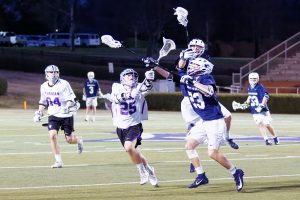 Brett Tenaglia, #25 here in action for Furman vs. Penn State in 2020, is reportedly headed to Syracuse. (Photo for LaxAcrossAmerica by Bob Mulholland/OCR Photography)

Furman took the action as part of a broader cost-cutting initiative brought on by the financial impact of COVID-19.

Furman was just one of a number of institutions that have curtailed athletic programs as a result of the pandemic. 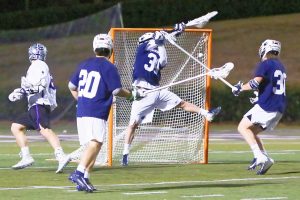 Furman scores against nationally ranked Penn State–in what proved to be not only the final game of the 2020 season but of the program’s history. (Photo for LaxAcrossAmerica by Bob Mulholland/OCR Photography)

It was also announced this week that D1 college hockey had lost its sole outpost in the South when the University of Alabama, Huntsville discontinued its program, along with both men’s and women’s tennis. (UAH has since announced that sufficient funds had been raised to give the program a one-year reprieve).

Furman’s decision highlighted both the vulnerability of non-revenue sports such as lacrosse, but also the pervasive impact of the pandemic on university budgets and operations.

But Furman served as an especially disturbing case study.

This wasn’t an instance of some marginal, backwater institution living well beyond its meager financial resources, only to be caught short after overreaching athletically.

The reality, it turns out, is a lot more unnerving. 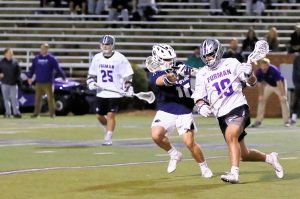 Furman is precisely the kind of small, liberal arts college that can successfully harness a non-revenue sport like lacrosse as a potent regional and national marketing tool.

It’s a formula that’s been successfully used by colleges such as Quinnipiac in Connecticut (in D1 college hockey), and by High Point in neighboring North Carolina in D1 lacrosse.

Its Division 1 baseball team had been competing since 1896.

It had been hard not to gulp last month on seeing a telling detail in Cornell’s announcement that assistant Conor Buczek would be elevated to head lacrosse coach to replace outgoing coach Peter Miliman, just hired to replace Dave Petriemala at Johns Hopkins.

An in-house promotion, it was explained, had been necessary since the usual nationwide search would be impossible under Cornell’s university-wide freeze on hiring.

And this was, after all, Cornell…. which had a pre-crisis endowment of over $7 billion.

But the underlying reality wasn’t so straightforward.

Furman’s pre-crisis endowment was about $700 million; Clemson, by comparison, has an endowment of $775 million.

The crucial difference between the two schools is that Clemson has 23,000 students.

That said, the value of the school’s endowment had declined about $100 million since March.

And it was made clear that the elimination of the two D1 teams, coupled with a reduction in athletic scholarships over the next five years from 200 to 155, would save the school $5 million annually.

It remains to be seen whether other D1 lacrosse programs fall victim to COVID’s financial fallout.

But Furman wouldn’t have come to mind as a likely first casualty, which is unsettling. 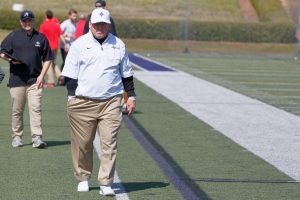 Coach Richie Meade’s experience at both West Point and the Naval Academy made him a natural fit for a state as steeped in military tradition as South Carolina. (Photo for LaxAcrossAmerica by Bob Mulholland/OCR Photography)

That $5 million annual savings figure must’ve seemed like a grim echo of the Furman program’s beginnings.

The lacrosse program at Furman was made possible by an anonymous, one-time donation of $5 million dollars—the single largest outright gift in the institution’s history.

Another measure of the school’s commitment to the program had been its successful recruitment of Richie Meade.

Meade was to be the only coach throughout the program’s history.

And he seemed like a perfect fit for a state with a rich military tradition.

He’d been an assistant coach at both West Point and Annapolis.

He left Annapolis after what was later conceded to be a firing, and the backlash was so intense that for years Meade still commanded a significant group of loyalists among Navy alumni and fans.

(Furman’s game vs. the Midshipmen on February 15th of this year marked the first time Meade had stepped foot on Academy grounds since his departure. Furman lost 19-3).

And sadly, this was not the first time a program had been terminated under his watch.

In 1983, Meade was the young head coach at the University of Baltimore when that program had been terminated.

A one-time power, the program had been in existence since 1949. 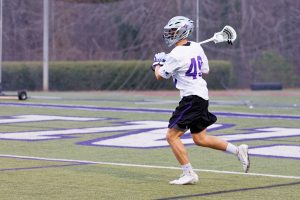 2020 Freshman midfielder Zack Kinsella, who played at Severn School in Annapolis. He was one of a number of players from traditional hotbed areas recruited to Greenville by Richie Meade. (Photo for LaxAcrossAmerica by Bob Mulholland/OCR Photography)

You would’ve expect a program Furman’s roster to have been disproportionately stocked with homegrown talent.

There were 9 D1 college lacrosse players from South Carolina on 2020 rosters—yet only one (Harris Hubbard from Daniel Island) was at Furman.

No doubt largely because of Meade’s stature, the Paladins managed to recruit a sprinkling of players from high school powers in traditional hotbed areas like Maryland and Long Island. 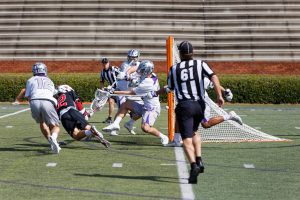 Meade had also attracted talent from top-flight programs outside the East Coast. Two of his offensive stars on the 2020 roster were from Colorado, Anders Erickson (Regis Jesuit), and Chad Kreuzer (Monarch High School).

Meade’s four-year starter at goal, senior Alex Van de Bovenkamp, was from Illinois, and played at one of the Midwest’s, and nation’s, premier lacrosse powers, Culver Military Academy in Indiana.

There were also players three players from St. Xavier in Cincinnati (which had also produced the 2019 team’s top scoring midfielder, Will Holcomb).

But beyond that, Furman featured a broad geographic mix of Southern-based talent, with players from Texas, North Carolina, Georgia, Florida, and even Louisiana.

(It should be noted here that Furman pledged to honor scholarship commitments made to the affected athletes).

The State of South Carolina Lacrosse

South Carolina is often regarded as a regional laggard in lacrosse, trailing considerably behind neighbors like North Carolina and Georgia.

That may still be the case, though the sport has made significant in-roads in the state.

The state officially sanctioned the sport in 2009, and there are now approximately 50 high school programs.

Again, there were nine players from South Carolina on 2020 D1 rosters.

(Will Frith of Hilton Head, who had committed to Furman, has now signed on with Towson).

And as mentioned previously, Furman was hardly the sole landing spot for the state’s D1 talent; its 2020 roster had only one.

Significantly, the 8 other South Carolinians in D1 were represented on some powerhouse rosters in 2020.

Oceanside’s Riley Seay had begun the 2020 season with Loyola, having transferred from Bellarmine.

It also needs to be emphasized that lacrosse in the hasn’t only been played at the high school and D1 levels.

Both Clemson and the University of South Carolina have vibrant club programs.

South Carolina’s club team won the MCLA Division 1 national championship over Cal in 2019, a first for any team in the SouthEastern Lacrosse Conference.

And the Gamecocks had had 8 players from instate on that championship roster.

(The Gamecocks had also begun the 2020 ranked #1 nationally).

Limestone College, located in Gaffney, has had a program since 1990, and has won five NCAA championships at the Division II level—and importantly, and increasingly, has been a landing place for a lot of  top, instate talent (the roster of the 2020 team, which had entered the season ranked #2 nationally, featured four natives). 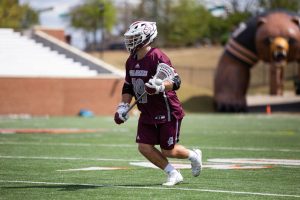 Bellarmine’s Riley Seay—now with Loyola—was one of 9 players from South Carolina on 2020 D1 college lacrosse rosters. (Photo for LaxAcrossAmerica by Matthew Pendry/PendryPhoto)

It would be a mistake to lump together the D1 lacrosse experiences of Furman and Presbyterian.

Presbyterian’s D1 run had been brief, unsuccessful, and above all, lonely.

Even in 2020 Meade would bemoan the difficulty of luring opponents to Greenville.

Presbyterian’s program was a true geographic outlier; predating the programs in neighboring states that would ultimately join with Furman in the eight-member Southern Conference.

High Point, in North Carolina, started its program in 2013.

Furman, at least, had something to show for its D1 experience.

Going into its 2018 game against North Carolina, the Paladins had lost the four previous games against the Tar Heels by an aggregate score of 59-16.

In the 2018 Furman had actually been leading UNC by a goal with two minutes left—only to lose in overtime.

That performance, and a 2017 victory over Air Force, may have been the program’s high-water marks.

In 2017 the Paladins had gone from 2-11 the previous season, to 7-8 overall and 6-2 in its conference—good enough to win a share of the SoCon title.

But it was increasingly hard for the program to keep pace, and if it never neared the futility of Presbyterian, it also never hit its stride in the way that other relative newbies–and fellow SoCon members—like Richmond and High Point had manged to do.

The program’s most conspicuous legacy will probably take the form of its remaining players, now likely dispersed throughout the D1 universe. 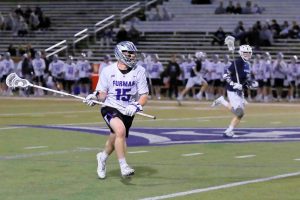 A week after the demise of Furman’s lacrosse, defenseman Cole Horan, here in action in 2020 against Penn State in the program’s final game, announced his transfer to Syracuse. (Photo for LaxAcrossAmerica by Bob Mulholland/OCR Photography)

Horan, who played for Floral Park High School on Long Island, started all seven games for the Paladins in 2020.

Austin Leonard, a solid middie who played at Weddington High School in North Carolina, is a sophomore, as is Anders Erickson. Kinsella is a freshman.

As of this writing a total of 12 Furman players had entered the NCAA Transfer Portal.

The conference overall, though, is likely to continue to benefit from the increasing national profile of its stronger programs like High Point and Richmond.

It’s just a shame that the Paladins, and Meade, won’t be there for it.