You are here:
NEVADA 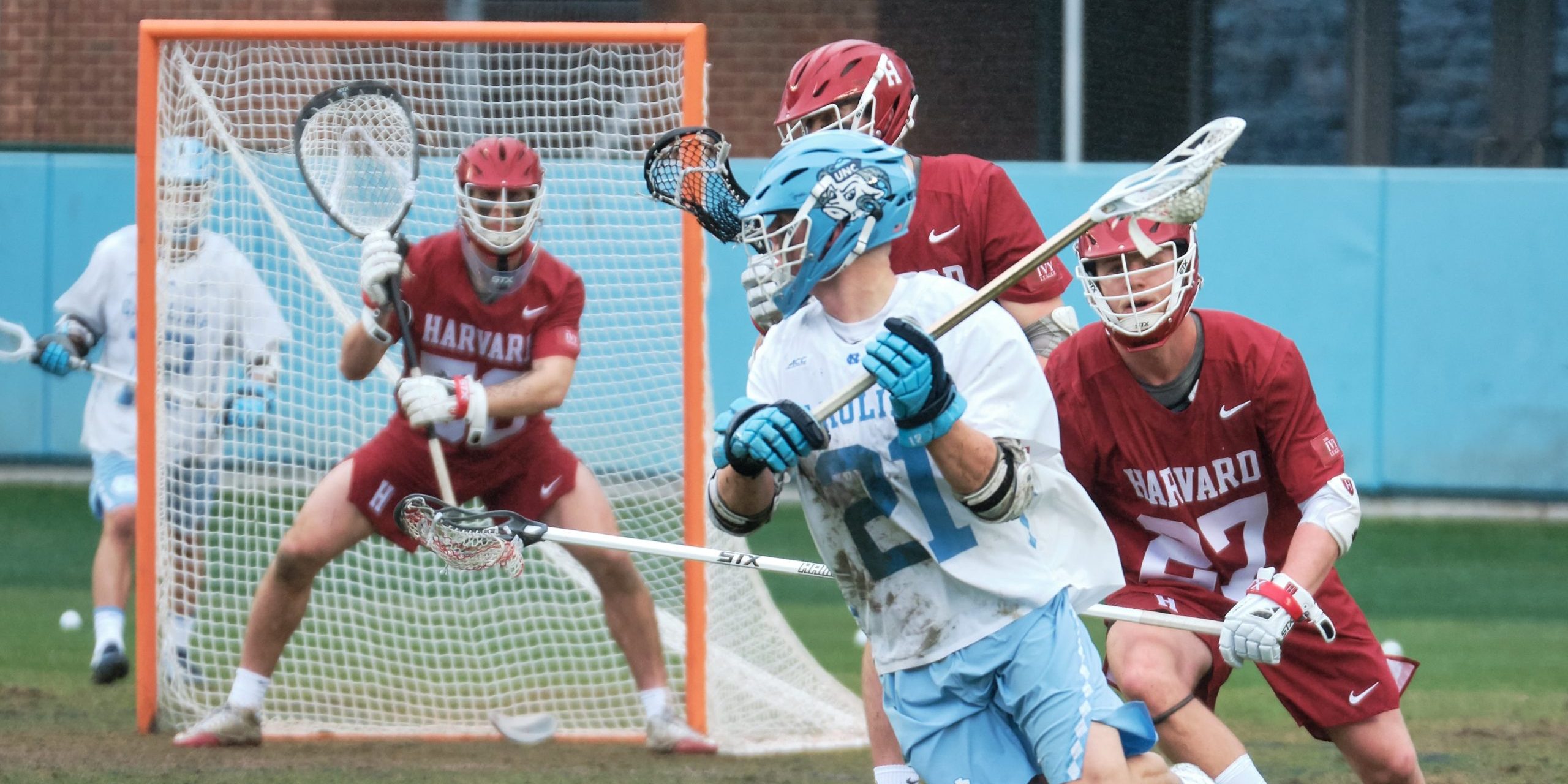 The lacrosse community, you would think, would be especially attuned to the perils of stereotyping.

But a lax recruit from Nevada?

The guy would inevitably have to be some kind of edgy, Sin City caricature.

Maybe a composite of Dan Bilzerian and a youthful Andre Agassi, performing stick tricks aboard a replica Venetian gondola, or playing wall ball against the Luxor Sphinx.

And he’d be coached, from the shadows, by some gruff, faintly sinister handler, a 2020 incarnation of UNLV’s Jerry Tarkanian.

In reality, Justin Anderson, the best among current D1 college lacrosse players from Nevada, and arguably among the best the state has produced, is a senior co-captain at North Carolina honored as an All-Academic ACC selection last year; and a seemingly understated 23-year-old who entered college after a two-year hiatus—-not spent counting cards, or waiting for fifth street, or even selling Teslas, but serving a Mormon mission in Chile.

A graduate of Centennial High School, Anderson had originally been a member of a 2014 UNC recruiting class that also included Brian Balkam and Chris Cloutier—a class that would unexpectedly win a national championship in 2016. 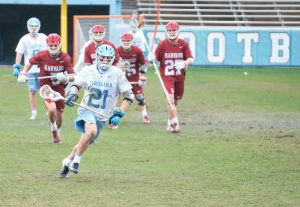 Centennial’s Justin Anderson in action for North Carolina against Harvard. (Photo for LaxAcrossAmerica by Alex Zachman)

Anderson instead joined the Tar Heels, and the team’s first midfield, in 2017 as a 21-year-old freshman.

Another story that runs slightly counter to the prevailing Vegas vibe is that of AJ Mercurio.

One noteworthy fact is that Mercurio is not from Las Vegas, but from Reno, where he was a four-year captain at Damonte Ranch High School.

A more remarkable fact is that he’s legally blind in one eye.

At the age of 15 months, Mercurio had been diagnosed with Langerhans cell histiocytosis, which affected the mastoid behind his ear and resulted in the loss of vision in his left eye.

Now cancer-free, he’d first undergone rounds of chemotherapy at the age of two. 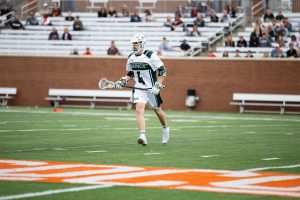 Anderson and Mercurio join a list of Nevadans who have managed not only to enter the Division 1 ranks, but also scale its upper reaches: Grant Gravitt and Tristan (TJ) Wright (Denver), Chase Bradshaw (Loyola), Madison Fiore (the state’s first D-1 recruit, to Maryland in 2007), and Kieran Eissler and Jeremy Huber (Johns Hopkins).

Eissler typified the development of many players in emerging lacrosse states like Nevada—he was coached by his father, Chris Eissler, a transplant from Long Island.

Jeremy Huber’s experience was also representative of the experience of many players from developing regions: he attended one high school (West Tech Career and Technical Academy), and played lacrosse for another, Palo Verde. (See more about Jeremy Huber below). 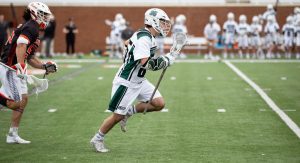 Of the current players cited above, Tristan (TJ) Wright—and especially his presence at Denver—might be the most significant.

A goalie on an elite team, Wright has still not seen a lot of playing time for the Pioneers.  Like his now-teammate at Denver, AJ Mercurio, Wright is from Reno.

Wright was also the first player outside the Las Vegas metro area to reach Division 1.

The presence of two Northern Nevada players in Division 1 college lacrosse doesn’t initially seem too significant. Then again, geography tends to be lost on most Americans.

And in longtime lacrosse strongholds, Easterners especially tend to be fuzzy on both locations and proportionate distances when it comes to the Midwest and West.

Las Vegas and Reno are separated by 438 miles, or approximately, about 7 hours by car.

That would be roughly the equivalent of a Johns Hopkins team busing up from Baltimore to New England to play Brown in Providence.

There’s been, and continues to be, a disproportionate concentration of teams and players in Las Vegas area—a pretty typical pattern in states where lacrosse is still taking root.

The entire state of Nevada still has only about 40 high school lacrosse programs, including both girls and boys.

For years, Centennial and Palo Verde were essentially the only two programs in Las Vegas. 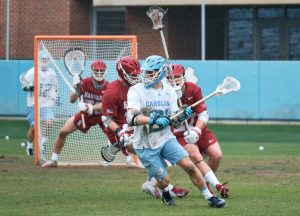 That has changed, and the continued growth of a vibrant lacrosse scene in Reno and Northern Nevada would go a long way in transforming the game’s profile in the state.

Geography also poses considerable obstacles to the sanctioning of the sport of lacrosse in Nevada—again, as it does in several states.

For the time being at least, a path to D1 out of Nevada will likely involve independent teams, and a reliance on showcase events and travel teams (Anderson and Wendel, for instance, were products of the West Coast Starz program).

In the meantime, programs from the state should be congratulated for their willingness to seek out more and better out-of-state competition.

The results of those tests during the 2019 season were decidedly mixed though nevertheless encouraging: Palo Verde, for instance, lost to solid programs in Jesuit (Portland, Oregon) and Hamilton Southeastern (Indiana), while defeating Kettle Moraine, a Wisconsin high school power, 12-11.

Nick Wendel is frequently identified as the player to score the first goal for Cleveland State in its 2017 opener against Michigan—which also marked CSU’s debut as a D1 program.

But it would be unfair to relegate Wendel to a minor historical footnote of a fledgling program.

He deserves to be mentioned along with Justin Anderson as one of the state’s all-time best lacrosse players. 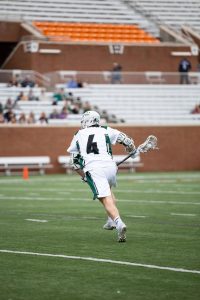 Wendel came to Cleveland State from Faith Lutheran, where he was a four-year varsity player. He led the state in scoring in his junior year, and came in second his senior.

Like Andersen, Wendel was a junior captain for the Vikings, and he’s shown a capacity to score at the D-1 level.

And yes, CSU is a relatively new program, and it certainly lacks the prestige of teams like Justin Anderson’s Tar Heels; and CSU doesn’t play an ACC schedule.

But as an independent CSU still plays a fairly challenging schedule that, in 2019, included Ohio State, UNC, Penn State, and Denver.

So although it might seem easy to dismiss Wendel’s 5-goal performance in 2019 against, say, Canisius, he also had a hat trick against Penn State (then the nation’s top-ranked team) —and also goals against OSU, UNC, and Denver; and in about half those games he played at the midfield.

This January marked the fifth anniversary of the death of Jeremy Huber, another Nevada recruit who defied easy stereotypes.

In January of 2015, prior to his first season at Hopkins, Huber died in his dorm room at the school from complications resulting from pneumonia and flu.

He had also been his class salutatorian, and was an accomplished pianist.

A scholarship was created in Jeremy Huber’s memory for the study of piano at the Peabody Institute at Hopkins.