Georgia Lacrosse Gets Its Fourth Under Armour All-America

You are here:
GEORGIA 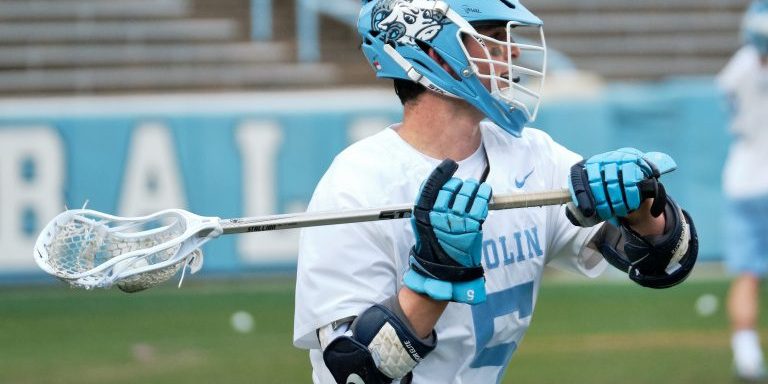 Eric Malever’s selection for the 2020 Under Armour All-America Senior Lacrosse Game marks the fourth time a player from Georgia has been chosen for the event, which has become the premier showcase for incoming Division 1 freshmen in college lacrosse.

The announcement of rosters last week unfortunately coincided with the organizer’s decision to cancel the event, usually held annually in Baltimore in July, due to the COVID-19 pandemic.

The decision has to be devastating to not only the players, but to their families and fans.

And in the case of Georgia, the loss might be felt even more sharply since, over the years since its 2006 inception, the Under Armour game has provided a national stage for talent from the state.

And in doing that, the UA game has gone a long way toward enhancing the image and reputation of lacrosse not only in Georgia, but the South generally. 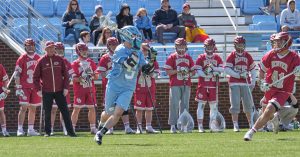 Centennial’s Nicky Solomon in action for North Carolina against Denver. (Photo for LaxAcrossAmerica by Alex Zachman)

The Under Armour All-America Game and Georgia Lacrosse

When Nate Solomon stepped on to the field at Towson in the summer of 2015 as the first Georgian to play to in the UA game, you can imagine the knowing snickers that must’ve come from the assembled Maryland Old Guard.

Solomon was coming out of Centennial High School in the Atlanta suburbs with some seemingly preposterous career numbers: 326 goals and 297 assists.

He’d recorded 95 goals and 75 assists in his senior year alone.

No doubt the level of competition he’d faced at Centennial was a topic in the stands that night.

The players he’d now be up against would be a little different: he wouldn’t be playing against any Jaw-juns in this game.

The defensive unit of the North team that night consisted of Syracuse commit Nick Mellen of West Genesee, a legendary upstate New York program that had among others, produced Syracuse coach John Desko, Eddie Bouhall of Lynbrook on Long Island (Lehigh), Zach Ambrosino of Taft in Connecticut (Cornell), and Hugh Crance, a Notre Dame commit from Corona Del Mar in California.

Solomon had three goals in the game.

More importantly, Solomon went on to play four years of D1 college lacrosse, and not as an afterthought at some marginal program.

He was a three-year starter at Syracuse, ending his D1 career with 124 points on 84 goals and 20 assists.

In his 2019 senior season with the Orange, Solomon was All-ACC, and an Honorable Mention USILA All-American. 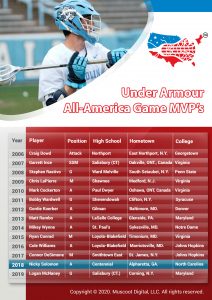 And then in 2018 Nate’s younger brother, Nicky, was the UA game’s MVP.

Why was this such as a big deal?

You can see from the chart above just how complete a stranglehold players from traditional lacrosse hotbeds had had on this award—especially those from New York and Maryland.

Nicky Solomon was the first player from Georgia and the South to win the award.

And just to be clear, experience has shown that making the UA selection, and even excelling in the game itself, isn’t necessarily an ironclad guarantee of success at the D1 level.

That said, Nicky, like his older brother, has made the transition to Division 1.

In the COVID-curtailed 2020 season, Nicky Solomon had already scored 29 points in seven games, enough to rank second on the North Carolina team.

The Quality of Georgia Lacrosse

Like his brother before him, Nicky Solomon came into the Under Armour with some suspiciously high numbers.

Nicky had actually surpassed his brother with career high school points at Centennial with 651.

He’d managed to score four goals, including 3 in the first quarter.

And, again like his brother, he hadn’t been facing some slapdash defensive unit.

How legit were they?

Just how good was the competition he and his brother had faced in Georgia.

Just as a point of perspective, there were 78 Georgians on Division 1 college lacrosse rosters in 2020. In 2021, that number dipped to 77, but take into account that is the number on active 2021 rosters (meaning, basically, without the entire Ivy League and Hampton).

And as with UA lacrosse players from Florida, the game isn’t exactly the first time they’ve faced quality competition.

For example, the 2019 runner-up for the state championship, Lambert High School, lost to Hill Academy in March 2020 10-9 (Hill is one of Canada’s premier programs, producing among others current Cornell All-American Jeff Teat).

And for the record, Lambert was the only public school team to make the round of eight at the National High School Lacrosse Showcase, held in Maryland in July 2018.

Lambert ultimately lost to two longtime standard bearers of Maryland lacrosse: Calvert Hall by a score of 6-2, and then to Bullis by 6-2.

On the other hand, Lambert did defeat another Maryland power, Loyola Blakefield, as well as Episcopal (Virginia), and a tough Lincoln Sudbury team from Massachusetts.

All of which brings us back to Eric Malever, the state’s fourth and most recent UA selection (we’re including here, as #3, Cam Henry, who played at The McCallie School in Tennessee, but is actually from Marietta).

There doesn’t seem to be a lot of skepticism about him.

Malever has been rated the nation’s fourth-bast overall recruit by Inside Lacrosse.

The attackman will be entering Maryland in the fall.

(For more, check out an interview with Eric Malever on the LaxRecords podcast).