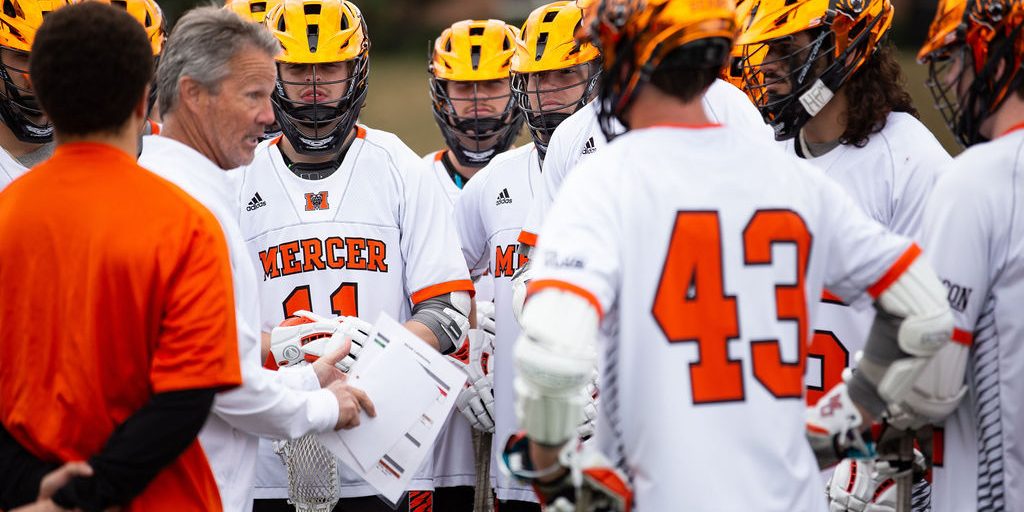 Kyle Hannan, who had served as head coach for 8 seasons at Mercer, the only Division 1 college lacrosse program in the state of Georgia, has resigned.

According to a Mercer University Athletics press release, Hannan is leaving the program in order to pursue a business opportunity. (Inside Lacrosse has reported that Hannan will become president of 24/7 Lacrosse, based in Charlotte).

“I’ve been coaching collegiate athletics for the past 34 years”, Hannan is quoted as saying in the release. “The time has come for me to begin an exciting new chapter of my life in the business sector of lacrosse. This is an amazing opportunity for my wife and two children.” 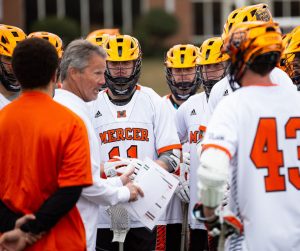 Hannan compiled a 37-62 record over 8 seasons at Mercer. (Photo for LaxAcrossAmerica by Matthew Pendry/PendryPhoto)

Hannan will be replaced as by Chad Surman, who joined the Mercer program in 2015, and had been serving as associate head coach.

Hannan’s departure continued what has been an especially turbulent period for the Southern Conference coming off the COVID-curtailed 2020 season.

In May, South Carolina-based Furman discontinued its Division 1 lacrosse program due to the pandemic’s financial impact.

In June, head coach Jon Birsner announced his decision to leave VMI to take over the job at Midwestern powerhouse Culver Military Academy in Indiana. 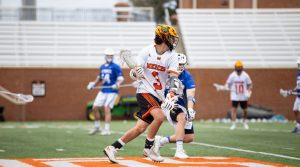 Sean Goldsmith, a standout attackman from Jamestown, North Carolina, is one of many Southern players who have found a D1 home at Mercer. (Photo for LaxAcrossAmerica by Matthew Pendry/PendryPhoto)

Hannan had taken over the Macon-based program in 2013, having previously coached at the D3 level at Bates in Maine, and, for 12 years, at Goucher College in his native Baltimore.

He inherited a program in only its third year of existence.

The Bears had kicked off their inaugural 2011 season with an astounding 36 freshman on the roster.

By the next season the team could boast all of two upperclassmen — against a combined total of 44 freshmen and sophomores (qualifying it as the youngest team in D1).

At the time of Hannan’s arrival, the program had also recorded two victories in its two-season history, with only one coming against a D1 opponent (a 14-11 win over Wagner in 2012).

In 2019, the Bears also won only a single game, but it was a measure of the program’s progress that four of its losses were by a single goal, including a 17-16 final against a highly talented, though erratic High Point team.

Hannan had overseen the Mercer’s evolution from an independent, to a member of the now-defunct Atlantic Sun Conference, and finally, as part of an increasingly competitive Southern Conference that includes not only High Point, but also Richmond, and an increasingly ambitious Jacksonville program.

And importantly, throughout its history, Mercer has provided a D1 home for a good deal of talent not only from Georgia, but the entire South.

It also included 11 from Florida, 6 from North Carolina, and two from both South Carolina and Tennessee.

Despite an overall 37-62 record with the Bears, Hannan did have some signal achievements in his 8 years in Macon.

As noted earlier, in 2013 he inherited a team that had recorded a total of two victories in the program’s two year’s of existence.

Under Hannan, Mercer recorded 11 victories in the next two seasons—or the equivalent of what the team would’ve have achieved, at its previous rate, sometime around 2024.

Having made the jump from independent to Atlantic Sun Conference member in Hannan’s second season, the Bears then proceeded to win a share of the ASUN regular season.

Hannan repeated the feat when he lead the Bears to a 5-1 record in their inaugural Southern Conference season in 2015.

Ironically, Hannan’s best season was the foreshortened one he’d just seen melt away. 2020 marked the Bears’ best start ever at 5-1.

Granted, that’s not exactly a Murderers’ Row of D1 stalwarts.

Still, these were precisely the teams that the Bears had all too often managed to lose to in previous seasons—especially narrowly.

And that itself marks considerable progress. 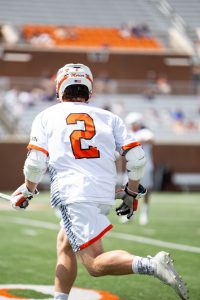 Middie Nick Rockefeller scored two goals in Mercer’s 2020 loss to North Carolina. He was one of 13 players from Georgia on the Bears’ 2020 roster. (Photo for LaxAcrossAmerica by Matthew Pendry/PendryPhoto)

Surman, who’s actually identified on the team’s site with the title interim head coach, has been part of three national championship teams.

As a defenseman he first won a NJCAA at Onondaga Community College, before moving on to the D2 with Le Moyne, and then to D3 Salisbury, where he was a member of national championship teams in 2011 and ’12.

Surman stayed on as a graduate assistant at Salisbury for two years before becoming an assistant on the Lehigh staff in 2015.

He started at Mercer in 2016, beginning as an assistant before being elevated to associate head coach.

But what kind of program will Surman inherit—assuming he retains the head spot?

As with many programs, not only in lacrosse but in all college sports, COVID-19 has rendered meaningless most of the usual measures and assumptions on which predictions can be based.

When will games resume? And will most or all 2020 seniors return when they do? And how will practices be conducted and recruits integrated?

And these seem like merely superficial concerns in the thick of a pandemic that is likely to raise ongoing health and financial concerns for all college sports, and especially non-revenue programs like lacrosse.

That said, Mercer should be able to count on Sean Goldsmith, a sophomore attackman from Acworth, Georgia who led the Bears in goals in 2019.

Yes, it’s seemingly easy to scoff at Goldsmith’s 2020 goal production in light of the Bears’s soft competition in the few 2020 games actually played; still, it should be noted that 3 of his goals came against North Carolina.

The same can be said about Nick Rockefeller, a solid midfielder from Jamestown, North Carolina, who scored 2 against the Tar Heels.

Surman’s defensive experience–both as a coach and a player—should benefit the Bears as well.

Defensive play was a particular concern going into the 2020 season.

Three teams, North Carolina, Air Force, and Jacksonville, all put up season-high totals of 20 goals against the Bears.