You are here:
Massachusetts 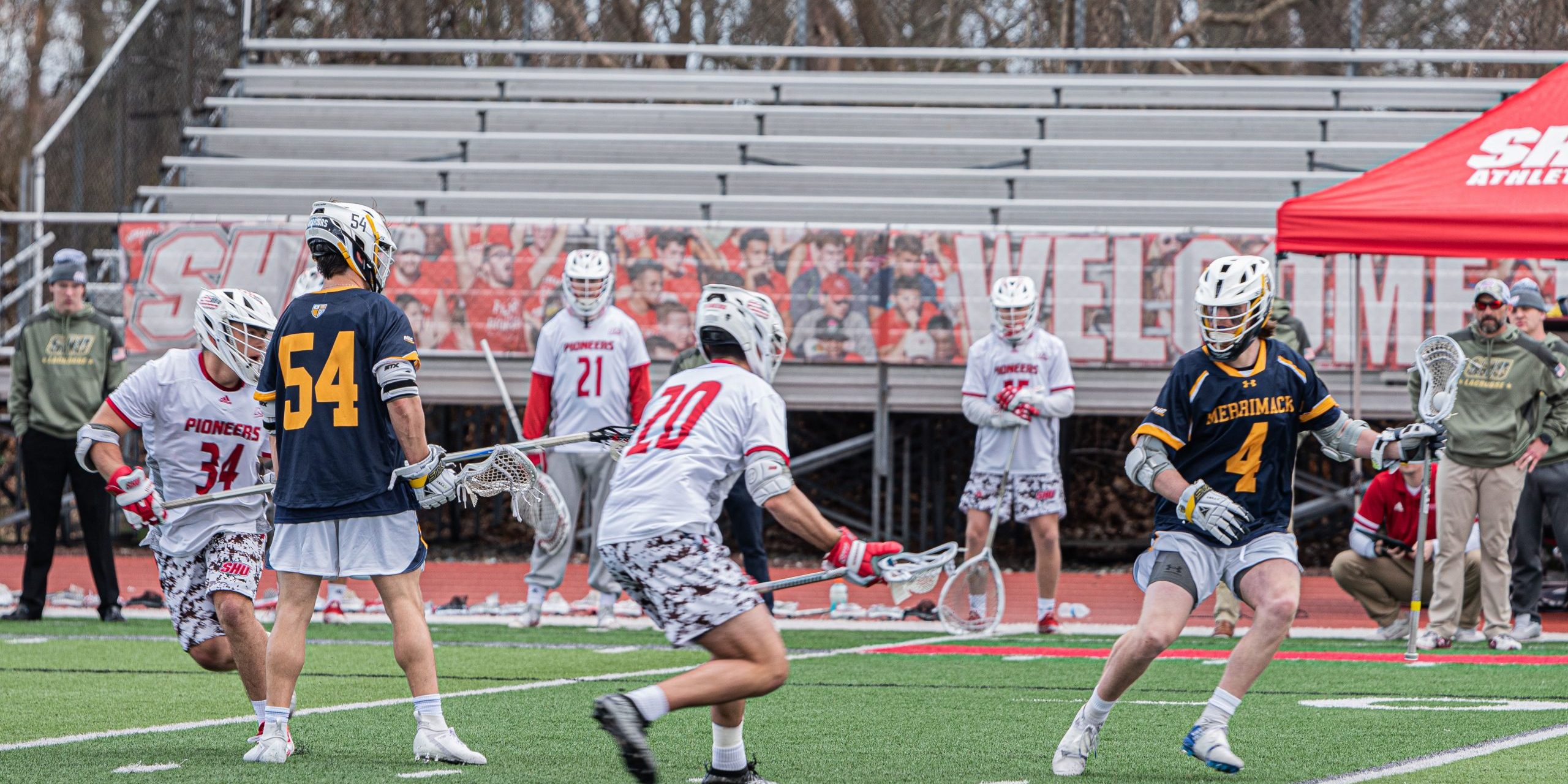 Merrimack Lacrosse only recently made the move from Division II to D1.

The move for reclassification was, as you might’ve suspected, strategic.

Which is far from unusual.

Colleges and universities have long used athletics as a vehicle for their strategic aspirations.

And in the case of Merrimack, the college’s administration has been pretty forthright about what was being sought.

Merrimack wanted to take its place as a regional, and national, Catholic institution alongside those it increasingly saw as its peers: Boston College, Providence, Sacred Heart, and Holy Cross (which, fittingly, would be the Warriors’ very first D1 lacrosse opponent in February, 2020).

But there were other factors at work here. 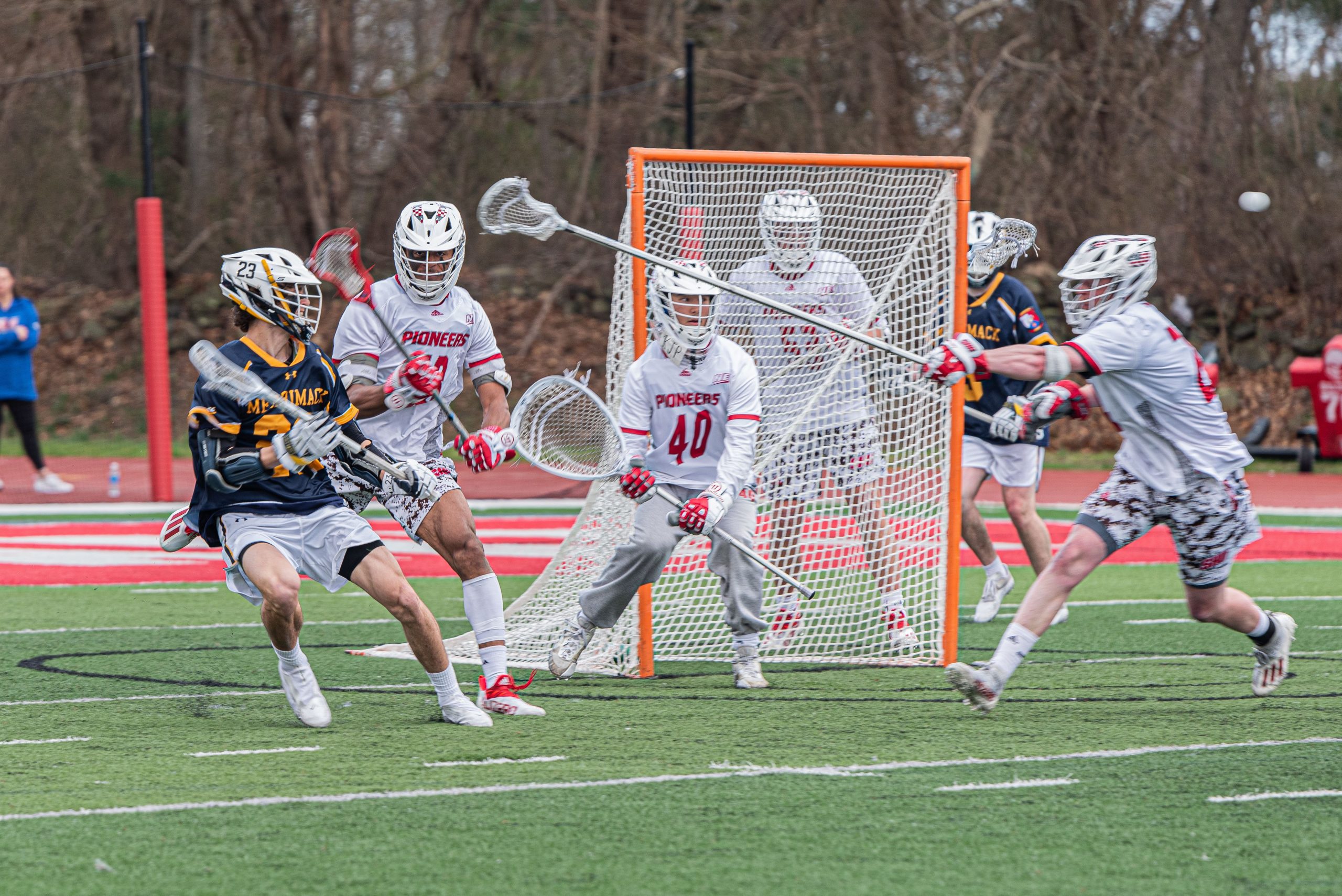 Players like Trace Morgan demonstrate the reach of a D1 program. He’s one of two 2022 starters from Florida at Merrimack—a Massachusetts college that had traditionally been a commuter school. (Photo for LaxAcrossAmerica by BlaqPearl)

The recent experience of Charlie Bertrand, the best player in Merrimack lacrosse history and also a star at Virginia, also says a lot about Merrimack College itself.

Though Bertrand would be heavily courted on entering the NCAA Transfer Portal after his senior year at Merrimack (drawing interest from UMass, Notre Dame, Richmond, Delaware, and Virginia), he received no D1 offers out of high school.

DII Merrimack was the sole program to recruit him.

But another factor in Bertrand’s choice was Merrimack’s strength in mechanical engineering—which ultimately became his major.

Bertrand’s academic preference dovetailed perfectly with a strategy that Merrimack has pursued in recent years.

The school has trimmed traditional liberal arts offerings in favor of a STEM-centered curriculum.

That focus was pretty unmistakable when the school unveiled Crowe Hall in 2017—its first new academic building in 30 years.

The 50,000 square-foot facility, which also houses Merrimack’s graduate school of business. has the trappings of that new curriculum. These include a mock financial trading floor, a financial counseling and training center, and high-tech touches in the lecture halls and classrooms.

Merrimack’s pragmatic curriculum, with its emphasis on experiential learning and preparation for the job market, also makes use of internships with companies like Raytheon and New Balance.

That focus on practicality and return on investment begins even before students arrive on campus. With the aid of an algorithm-guided system developed by an outside firm, Merrimack earmarks larger financial aid and scholarship packages to applicants demonstrating the greatest interest—and likeliness to enroll. 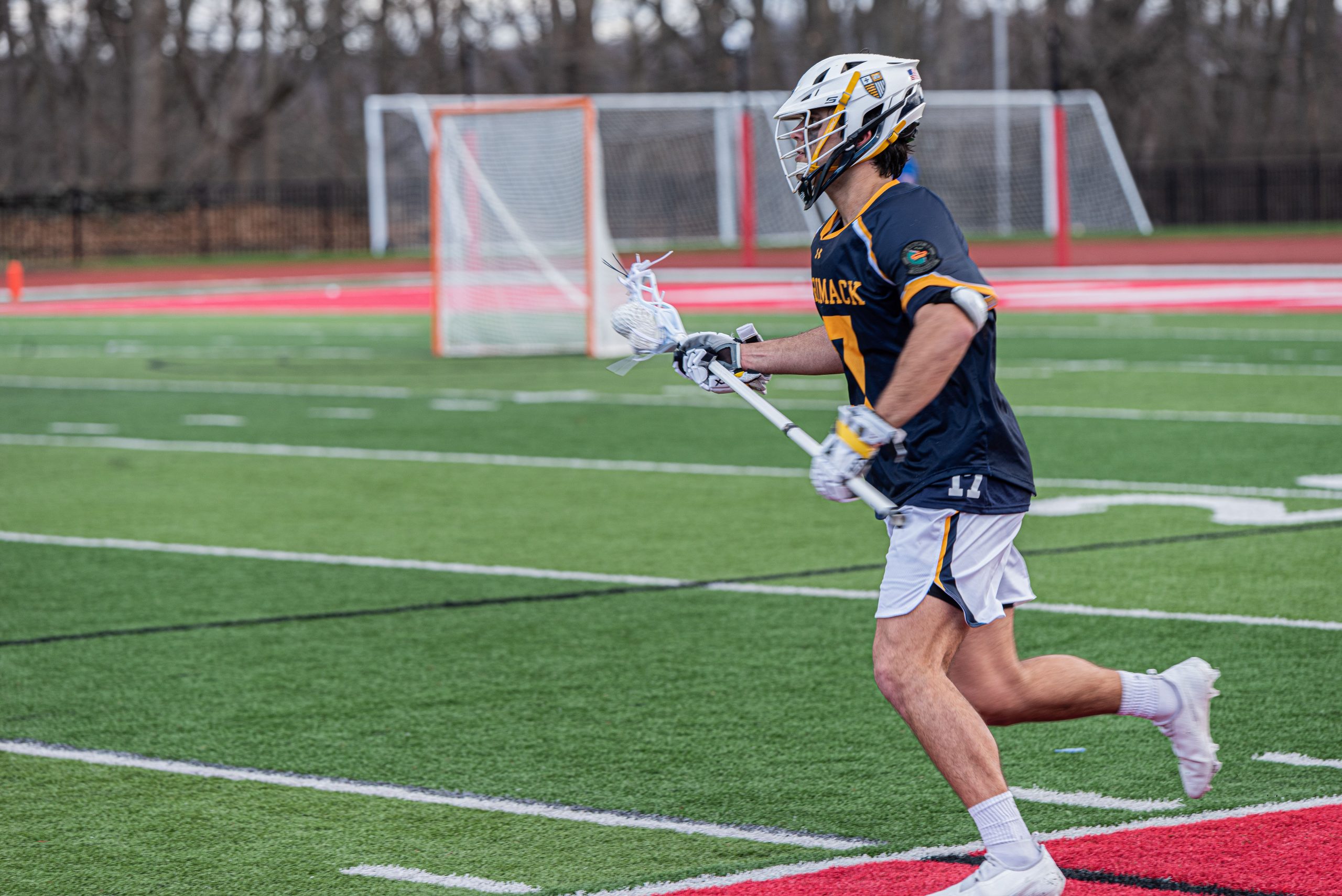 Miami’s Nicholas Perez-Blanco in action for Merrimack in an April, 2022 game vs. Sacred Heart. (Photo for LaxAcrossAmerica by BlaqPearl)

In some ways, these changes mark a return to the college’s roots.

Merrimack was founded in 1947 as a commuter school serving veterans returned from World War II (its nickname is a nod to those roots: the Warriors). It was founded by the Order of St. Augustine, making it one of two colleges in the country with that affiliation (the other being Villanova).

But Merrimack is also among a small number of small colleges that has managed to counter a grim demographic reality. The forecasted decline in the number of high school graduates that will begin to be felt around 2025. It’s also expected to be felt worst in the northeast region.

In fairness, Merrimack had already begun bucking that trend.

In the last 10 years, the school, located in North Andover, about 25 miles north of Boston, has more than doubled its enrollment (to about 4,600).

D1 athletics, and the opportunity to recruit, play, and be seen on a national stage, was central to the school’s strategy.

Merrimack had already been competing successfully in D1 in both men’s and women’s hockey. The remaining 22 teams began the reclassification process to D1 in 2018.

And certainly the NEC, the conference in which the Warriors now compete in lacrosse, provides an ideal entre to at very least a regional footprint.

Even with the loss of the Pittsburgh area due to the move by Robert Morris to the ASUN, the NEC still covers a pretty wide geographic swath. 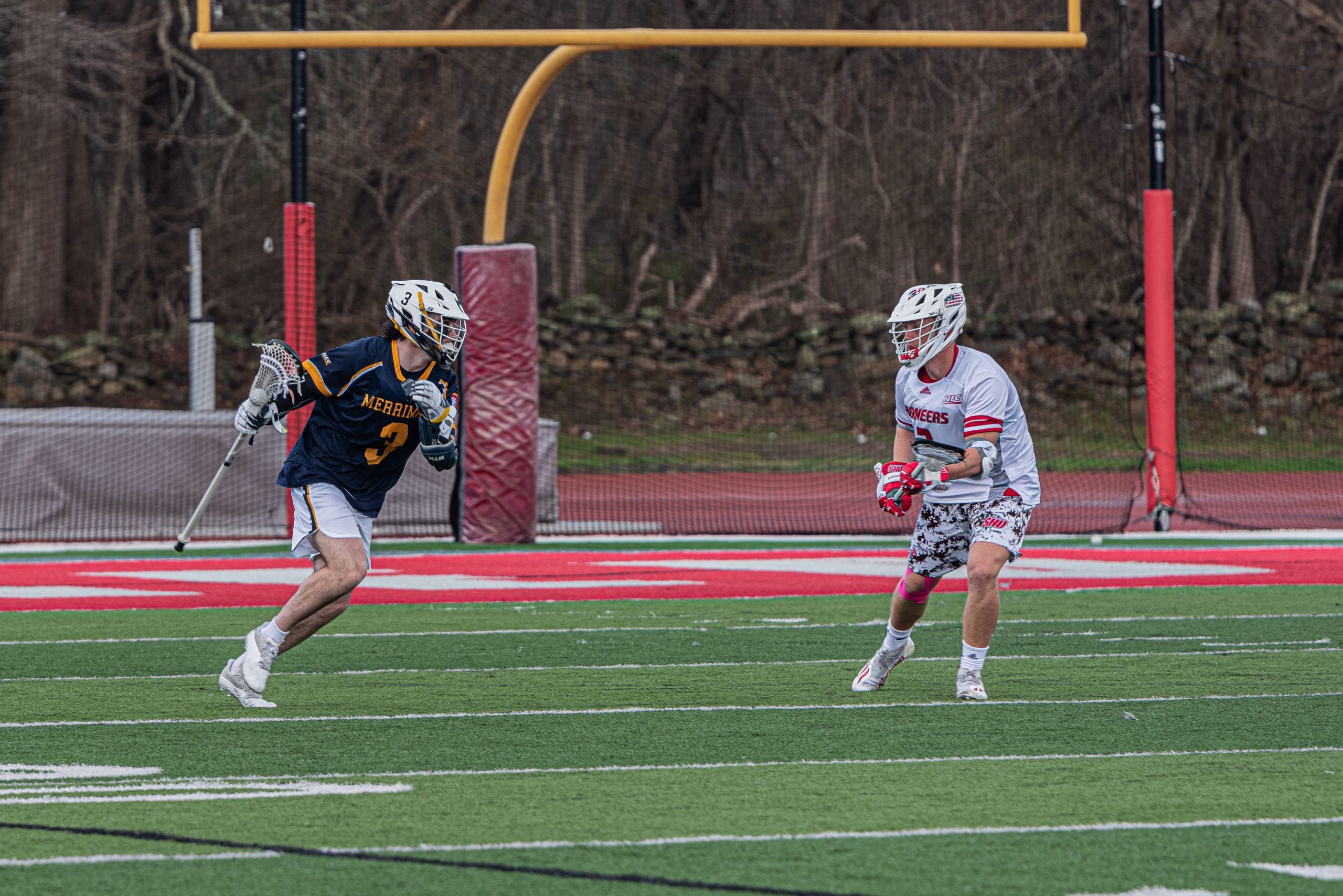 Jack Rooney, Merrimack’s leading scorer in 2022, works against a Sacred Heart defender. He and brother Tommy played at Long Island power St. Dominic, and came to the Warriors as transfers. (Photo for LaxAcrossAmerica by BlaqPearl)

Merrimack Lacrosse and the Transition to D1

Not to the postseason.

The Warriors won’t appear in any postseason tournament game this season—for the simple reason that under NCAA reclassification rules, Merrimack won’t qualify for either an NEC or NCAA Tournament bid until 2024.

But even with that restriction, Merrimack entered D1 play with some considerable advantages.

The most obvious was the program’s sustained success at the DII level.

The Warriors began D1 play in 2020 on the heels of two consecutive DII national championships (and reaching the finals a third time in 2017.)

The other crucial advantage involved talent.

The transition was eased by the presence of D1-calibre talent already on the elevated Warrior team.

Granted, not all D1 talent resides at the D1 level. For any number of reasons, players may slip to, or elect to play, at a level other than D1.

And in the case of Charlie Bertrand, the talent level was not just marginally D1; his talent was on par with players at the very upper reaches of the division, something he’d make clear in 2021.

Bertrand, a two-time DII Player of the Year at Merrimack, used his fifth season of eligibility to play with 2021 national champion Virginia. In ’21 he scored 26 goals for the Cavaliers, and would become one of three Virginia players (along with Jared Connors and Dox Aitken) selected in the PLL draft.

Warriors, Come out to Play—D1 Lacrosse

The other crucial advantage Merrimack brought over from DII involved quality and continuity of coaching.

The 2022 season is Mike Morgan’s third season as a D1 coach, but more importantly, it’s marked his 15th as head coach of the Warriors. He’s presided over two national championships, compiling a cumulative record during those seasons (2018, 19) of 35-4.

Morgan has overseen a relatively smooth transition to D1.

The Warriors made their debut in the COVID-curtailed 2020 season, with all games being competitive despite their 1-5 record. That single win came against Michigan.

2021 saw the Warriors improve to 5-5, with wins against UMass-Lowell, Wagner, LIU, Sacred Heart, and Mount St. Mary’s. Their only lopsided loss came at the hands of a strong Bryant team, 20-8.

The Warriors headed into the 2022 season with virtually its entire line-up intact including top scorers Tommy and Jack Rooney (brothers from Long Island powerhouse St. Dominic), Sean Black (a first-team All-NEC selection and former running mate at attack with Charlie Bertrand), and another 5th-year player, and ’21 starter, Christian Thomas.

Also returning was Henry Vogt, who had the bulk of playing time in ’21, and also earned All-Rookie honors. Vogt had a .531 save percentage for the season, including 19 against Bryant, and 14 apiece against LIU and Hobart.

It’s hard not to see Merrimack’s 2022 campaign as a disappointment; a team that had a lot of returning veteran talent performed unevenly, and ended the regular season again at .500, 6-6.

Granted, some of the losses were close. The Warriors lost to Hofstra 8-7, to Hobart 12-11, and, most impressively, to a tough Boston University team 12-10.

But two early-season, out-of-conference games may have been more revealing than recognized at the time.

In one, the Warriors defeated a Dartmouth team that, despite its record, was surprisingly competitive (the Big Green lost to Cornell by one and Princeton by two).

Still, Henry Vogt had made 21 saves in the Dartmouth game; and he had 23 against BU. Against BU, Merrimack also had a significant differential in shots-on-goal (35-22), and ground balls (43-21).

And they were also susceptible to runs.

They were down 8-1 to Bryant—a team that Dartmouth defeated—before ultimately losing 16-4 (marking the lowest goal total by any Bryant opponent in 3 years).

The Warriors also gave up a 5-goal run to LIU before losing 16-7.

On the flip side, ’22 has seen the emergence of several talented freshmen, including midfield starter Trace Hogan (Jupiter, Florida), and Joe Conley, a starter at defense from Chelmsford, Massachusetts).

Also returning will be Vogt, who actually improved on his save percentage from the previous year (ending the regular season at .561), and top scorer Jack Rooney (24,16).

Merrimack College and its Lacrosse Program

CONFERENCE: For the moment, unresolved. Merrimack had been in the NEC; but NEC announced its decision in May, 2022 not to sponsor lacrosse for the 2022-23 season.