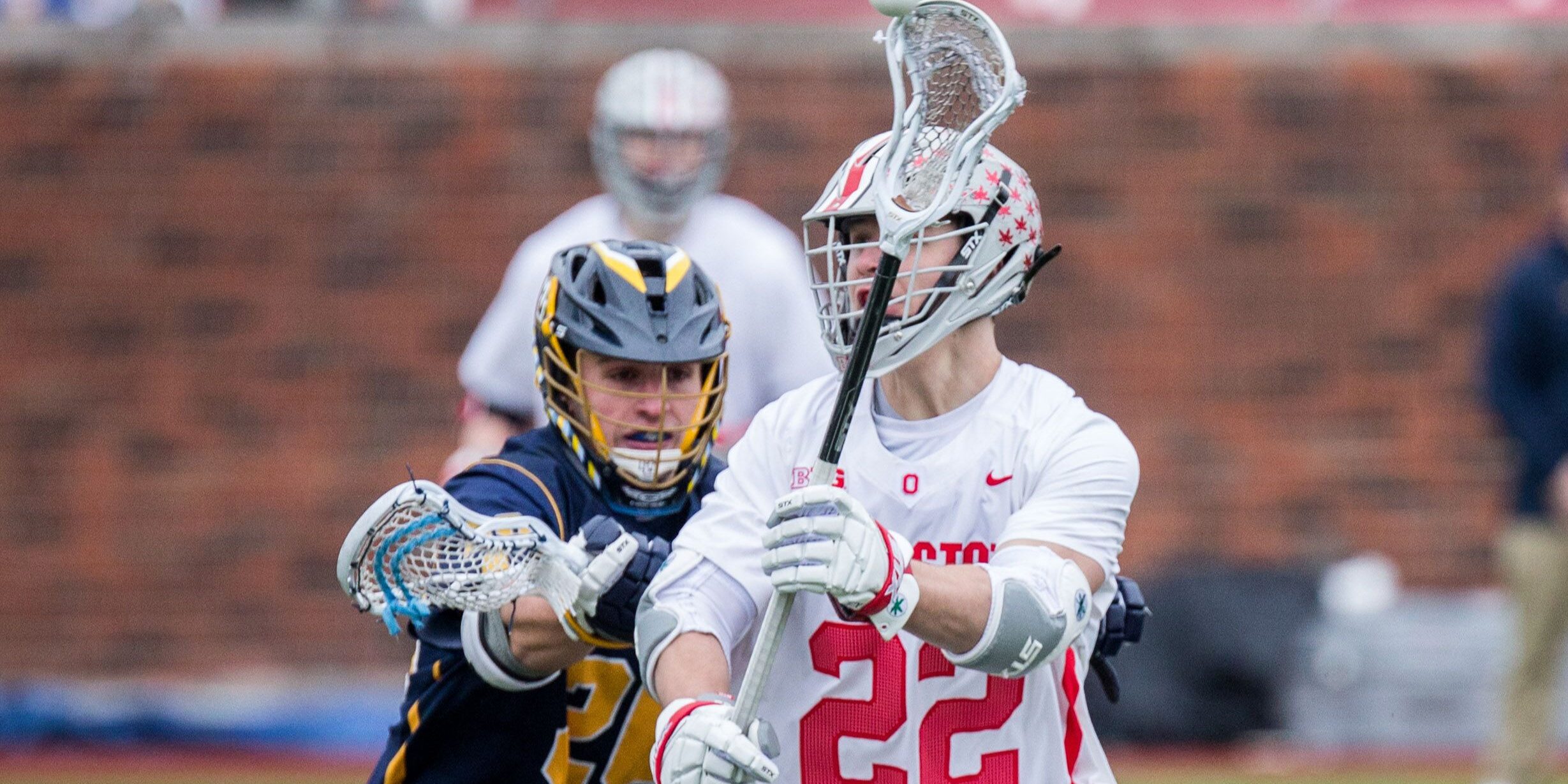 Two 2018 hall of fame induction ceremonies encapsulate a good deal of the history between college lacrosse and the state of Ohio.

Located about 30 miles northeast of Columbus and Ohio State, Denison is a small, liberal arts school that has produced an eclectic group of accomplished alumni that runs the gamut from Jennifer Garner and Steve Carell, to former OSU football coach Woody Hayes and longtime Disney CEO Michael Eisner.

Thomsen had overcome a congenital spinal deformity to play goalie at Penn.

He came to Denison in 1965, and as was frequently the case in that era, did double-duty, coaching not only lacrosse but also wrestling.

Thomsen’s 25-year career saw Denison amass a record during the 60’s of 103-12-2, and recognition as both a regional and national power.

Yes, big-time lacrosse was played in Ohio in those days, and not only at Denison but also at schools like Kenyon and Ohio Wesleyan.

But there was one important qualification.

Those Ohio teams of the 60’s and early 70’s teams were overwhelmingly comprised of transplanted Easterners; the few Ohioans on their rosters, with some notable exceptions, tended to be afterthoughts. 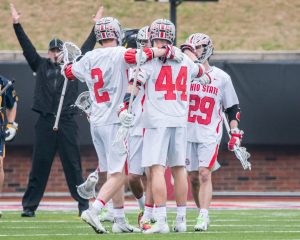 All of which brings us to the next ceremony…which was held not in Baltimore, but on the Ohio State campus.

That ceremony, by contrast, was a celebration of homegrown Ohio players—and more specifically, a confirmation of the state’s Division 1 talent and heritage.

Held in June, it recognized the 2018 class of inductees into the Ohio Lacrosse Hall of Fame, including:

Over 20 years after he graduated from Upper Arlington High School, Dusseau is still considered the best lacrosse player the state of Ohio has produced.

He was a First Team All-American at Georgetown, two-time Tewaaraton finalist, the 2002 winner of the USILA Enners Award as Player of the Year, and a 2002 Team USA member.

Dusseau ended his Hoya career with 130 goals, many scored in the face of double and sometimes triple-teaming by overmatched opponents. In 2002 he managed to score nine times while covered by multiple Bucknell players.

Dusseau, whose impatience with one of his injuries once prompted Hoya coach Dave Urick to remark that “he just has no use for the medical profession”, is now a family physician practicing in Hilliard, Ohio.

Steve Dusseau’s teammate on an Upper Arlington team which won three Division 1 state championships, Koontz was 3-year All-ACC selection at Virginia, and a member of the 1999 national championship team.

Koontz was also a tri-captain for the Cavs, and a first-team All American his junior year in 2001.

The defender and LSM seemed likely to regain the honor, but he fractured and dislocated his wrist—playing touch football in December prior to his senior season. He nevertheless still has the distinction of being selected all-ACC three years in a row.

Koontz also played for the MLL’s Rochester Rattlers in 2002, and gained an additional professional credential when named in 2015 as among the 42 Best Lacrosse Players on Wall Street.

A four-year starter at St. Ignatius (2000-’03) and team captain at Ohio State under coach Joe Breschi, Kelly emerged as one of the nation’s premier face-off specialists.

He was 6-time MLL All Star in 17-year pro career. Kelly has spent the bulk of his lacrosse life in Ohio, playing at St. Ignatius High School in Cleveland, Ohio State, the Ohio Machine, as well as coaching stints at Denison and OSU.

Cory Kahoun (Worthington Kilbourne High School), was a two-time All-American at attack/midfield at Butler (yes, Butler did have a D-1 lacrosse team), who went on to play in both the NLL an MLL. Kahoun still lives and coaches in the Worthington area, and is an officer with the Columbus Police Department. 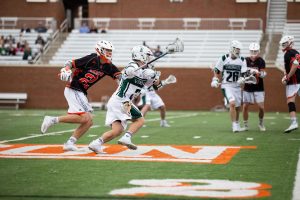 Given that Ohio has produced players of this caliber, why even include the state in this site—a site devoted to areas “outside traditional lacrosse hotbeds”?

And in 2019 there were over 70 Ohioans on Division 1 college lacrosse rosters.

Beyond that, Ohioans are represented in each of the 10 D1 conferences.

That said, Ohio only sanctioned lacrosse at the high school level in 2015 (going into effect only in 2017).

And a lot of significant growth steps in the state have occurred well after the players mentioned above.

Ohio State has emerged as a national power.

Big 10 lacrosse was inaugurated in 2015—with it the availability of games via the league’s own network.

Cleveland State debuted on the D1 level in 2017 (which, in itself, help galvanize support for sanctioning in the state).

There are currently approximately 150 boys programs in the state; as recently as 2010, that number was 101.

When current Ohio State coach Nick Myers began his career there in 2002, the Buckeyes had only a few native sons on its the roster.

More significantly, when Ohio State lost to Maryland in the 2017 NCAA finals, two Ohioans proved crucial to their tournament run: Tyler Pfister of Upper Arlington and J.T. Blubaugh (DeSales). (Both were subsequently drafted by the Ohio Machine).

So where does that leave the state of lacrosse in Ohio?

Ohio from the D1 Lacrosse Perspective

If Ohio doesn’t precisely match the criteria of a “non-traditional” hotbed of the sport, it most certainly falls under the preferred term of some in the lacrosse community: “market opportunity state”.

It’s hardly news that lacrosse’s growth is a function of the establishment and nurturing of youth programs—programs that ultimately become feeders for the sport at the middle and high school levels.

By that measure Ohio’s prospects for continued growth, from a Division 1 perspective, have benefited greatly from at least two factors.

The first is a commitment to the state, specifically the Cleveland area, made by the sport’s national governing body US Lacrosse.

The Lacrosse Communities Project-Cleveland, initiated in 2017, has committed $300,000 over two years toward the development of the game at the youth level in the city’s West Side.

The effort has led to a number of free clinics (not only for players, but also coaches and officials), and as one tangible, enduring effect, distributed a number of free sticks to players as part of US Lacrosse’s First Stick program (which also extends to equipment as well).

The second is the presence of advocates who genuinely know and love the game.

A crucial ingredient in US Lacrosse’s commitment to Cleveland was corporate sponsorship and participation.

Another vital piece has been provided by Cleveland State, in the form of field access, the participation of coaches and players in clinics, exposure to high-level play, among other things.

CSU’s participation in the program—and its very presence among D1 lacrosse schools—in turn owes a great deal to individuals like the school’s athletic director, John Parry.

Parry (no relation to the founder of this site) brought lacrosse to Butler in the 90’s, and was instrumental in birthing the program at CSU.

He’s also noteworthy as a D1 athletic director who, like Bob Scalise at Harvard and Jeremy Foley, formerly of the University of Florida, actually played lacrosse in college. (Prior to entering Harvard Business School, Scalise had been an All-American at Brown, and became, at 24, Harvard’s head coach in 1974).

The combined presence and efforts of these programs—and individuals—bodes well for lacrosse in Ohio.

Too often the concept of growth in the sport of lacrosse is framed only in geographic terms.

Initiatives like the one in Cleveland (and two others, also launched in 2017 by US Lacrosse in Albany and Brooklyn) also hold out hope of a broadening base for the sport as well.

A Final Word on Denison and The Division 3 Legacy

Talk of Thomsen and Denison’s past lacrosse glory will undoubtedly strike many readers as ancient history.

There will also inevitably be Division 1 purists dismissive of anything related to “D3”—past or present.

This is obviously wrongheaded; a lot of good lacrosse is played at the D3 level, and in many cases by players who, as this site has made clear in a number of places, possess D1 talent but have made a conscious decision to play at the lower level.

An additional point needs to be made about the historical relationship between D1 and D3.

It’s commonly thought that the current NCAA tournament structure, which went into place in 1971, resulted in clean and strict division between D-1 and D-3 teams.

The situation was, in fact, a lot more fluid.

Washington College in Chestertown, Maryland, with an enrollment of approximately 1,400 students, offers a case in point.

But throughout the 70’s the school played a qualitatively different schedule that included teams like Maryland, and Johns Hopkins. Hopkins, in fact, was still on the Washington College schedule as late as ’97. (The Blue Jays beat Washington College by 12 in that final meeting; but that year they also beat Army by 18, and Navy by 19).

Yet another reason not to prejudge the talent of a D3 player—regardless of the era.

Just to be clear, this post has focused on only a selected group of great Ohio-born D-1 players. There is a separate post devoted to the all-time best D1 lacrosse players from Ohio.