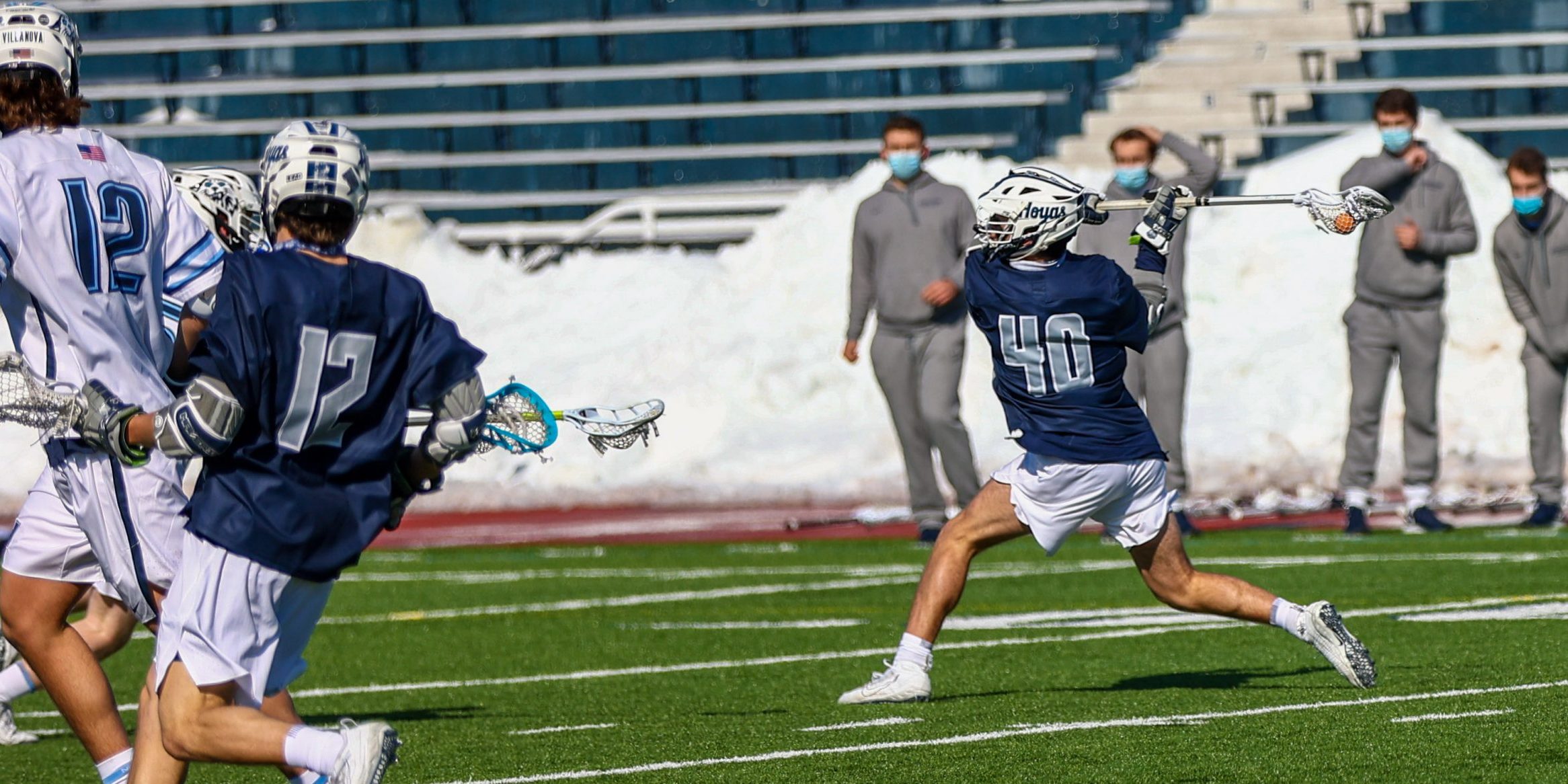 The state of Florida was well represented in the 2020 edition of college lacrosse’s premier showcase for incoming freshmen, the Under Armour All-America Game.

Which isn’t so unusual. 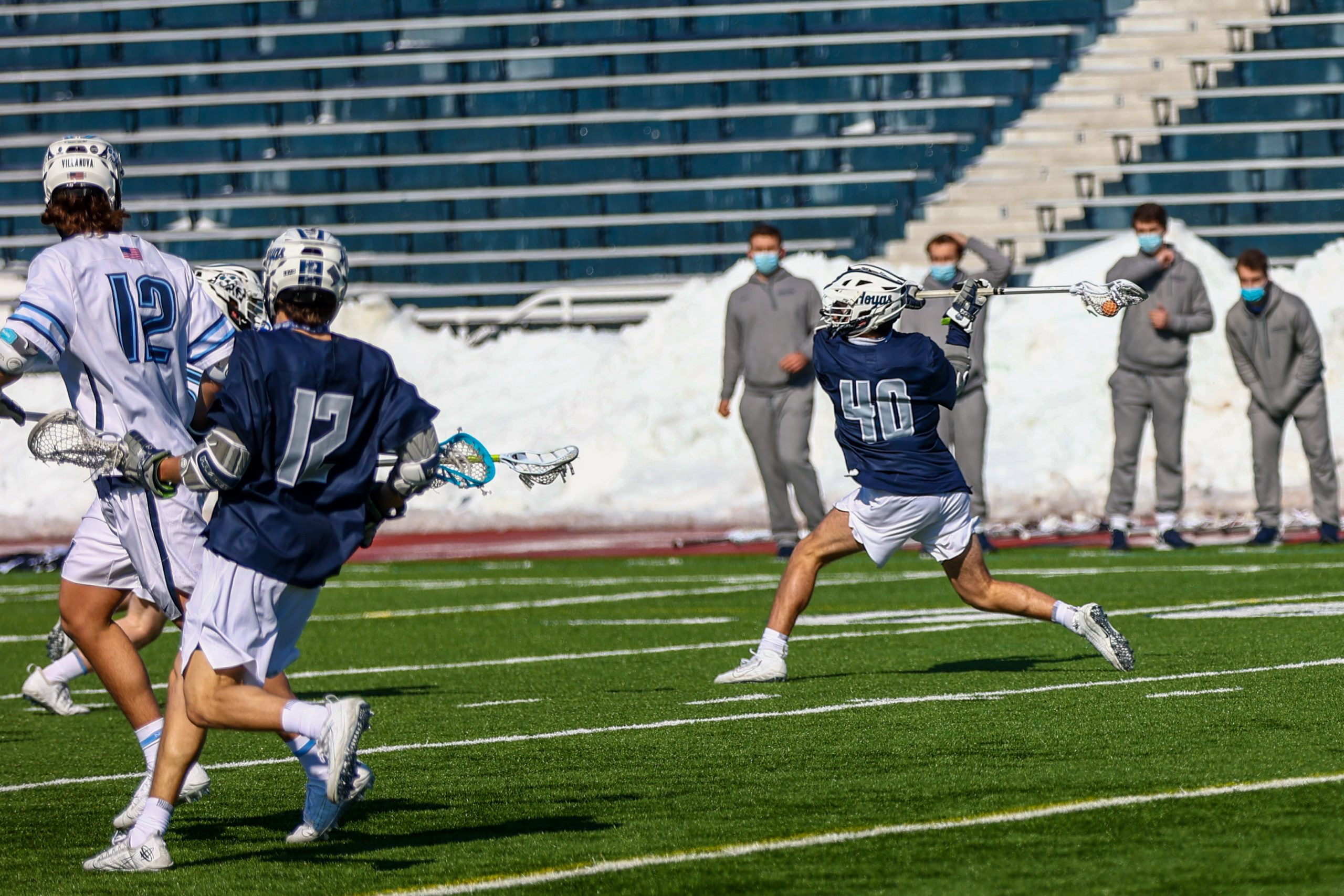 2020 UA All-American Dylan Hess, from Ponte Vedra Beach, in action for Georgetown in its 2021 opener against Villanova. (Photo for LaxAcrossAmerica by Mike Kruce/Mike Kruce Photography)

Since the inaugural 2006 game (which featured, among other players, Evan Royster, Chris Hogan, Ken Clausen, and Will Yeatman), a number of Floridians have participated in the event.

It isn’t even so unusual for more than one Floridian to be recognized in the same season.

As far back as 2008, two Florida players were selected: Lake Brantley’s Jake Bernhart, who would go on to be a two-time All-American midfielder with Maryland, and Wyatt Melzer, a St. Andrew’s grad who would win a national championship with Virginia in 2011. 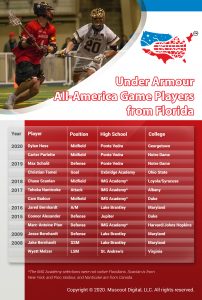 (Of Lake Brantley’s three Bernhardt brothers only Jared would fail to play in the game—-but only because he had a fairly compelling scheduling conflict: as UA noted in releasing that year’s rosters, he along with other players like Michael Sowers and Brian Constabile would be a member of the national U-19 team competing at the same time in the 2016 Men’s Lacrosse World Championships in British Columbia).

And in 2019, UA selected both defenseman Max Schalit at defense, and goalie Christian Tomei.

But what was unusual in 2020 was that both Florida UA All-America selections came from the same high school. 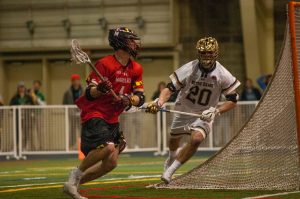 Lake Brantley’s Jared Bernhadt. Like his two brothers before him, the Maryland star was selected for the Under Armour All-America game in 2016. (Photo for LaxAcrossAmerica by Jim Harris Photography)

The two native Floridians selected for the UA game both played for what has emerged as one of the South’s premier lacrosse powers: Ponte Vedra High School.

The two 2020 Under Armour selections, Ponte Vedra midfielders Dylan Hess and Carter Parlette, were co-captains of an offensive juggernaut that won 17 straight games in 2019, culminating in a dominant 19-7 victory over St. Thomas Aquinas to clinch the FHSAA state title.

Both players were also products of the SweetLax program. 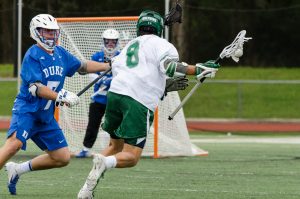 A 2020 Under Armour Game Recap

And, yes, the only other slightly unusual aspect of UA 2020 worth noting here involves the game itself.

It was never played.

But unfortunately, in the COVID-constricted reality of 2020 it wasn’t because, as with Jared Bernhardt in 2016, everyone was off playing in another event.

So we won’t get to see some anticipated match-ups.

Like Krieg, who’s headed to North Carolina, and Danenza, who will join the Duke Blue Devils, both Parlette and Hess will be playing for schools in the upper ranks of Division 1 college lacrosse.

So the chances of their seeing each other sometime in the next four years are actually pretty good.

So what do you think goes through the minds of players from non-hotbed states like Florida as they prepare for the UA game?

What are these Floridians thinking as they take their place on the team next to fellow Southerners from places like Georgia, Texas, Tennessee, and, uh, Pennsylvania?

(If you’re wondering how you managed to overlook Pennsylvania’s historic role in the Confederacy and Southern secession, rest assured: UA has had to take a few geographic liberties for the sake of roster balance. Not only Pennsylvania, but in some years also New Jersey and Ohio, along with certain Western states like Colorado, are treated as part of “The South”).

Contrary to what some fans might still think, these Florida players most likely aren’t standing on the field, slack-jawed and wide-eyed, finally witnessing–courtesy of UA selections from Long Island and Baltimore— just how the game is really played.

Because they’ve seen them before.

And not just crossing paths at a camp or showcase event.

For instance, three of their UA teammates were—or would’ve been—Sam King, Brendan Grimes, and Jack Stuzin, all coming from two Baltimore schools that represent the most blue-blooded of the Maryland lacrosse Old Guard: Gilman and Boys’ Latin.

And Ponte Vedra had played both of them in 2020.

In the case of Boys’ Latin they got handled: 25-6; but against Gilman they ended in very competitive 11-9 final.

But, again, none of this should be shocking.

It’s been almost 10 years since April 3, 2011, a day that marked a watershed event in the history of Florida lacrosse—which took place not in Sunshine State but in the New Jersey Meadowlands.

That day, at the Big City Classic, played at the then home of the New York Giants, St. Andrew’s upset New Jersey power Don Bosco.

And just to further announce the arrival of Florida lacrosse, the main event that day at the Meadowlands featured Johns Hopkins against North Carolina—with the winning Blue Jay goal being scored by St. Andrews alum Lee Coppersmith

But What About The Guys from IMG?

There was another year when Florida produced more than one UA All-America player.

In 2015, Connor Alexander of Jupiter received the honor along with Marc-Antoine Pion. Both players went on to play in Division 1, Alexander at Duke, and Pion at Harvard, and Johns Hopkins.

But Pion wasn’t a native Floridian. He played at IMG Academy in Bradenton but he was a boarding student and was actually from Montreal.

Similarly, IMG players like Cam Badour and Tehoka Nanticoke in 2017, and Chase Scanlan in 2018 wouldn’t qualify for this list on the same grounds (Scanlan comes from upstate New York, and both Nanticoke and Badour are also Canadian).

And just to be absolutely clear: there are some native Floridians at IMG.

But for the purposes of this post at least, only native Floridians were included.