You are here:
Connecticut 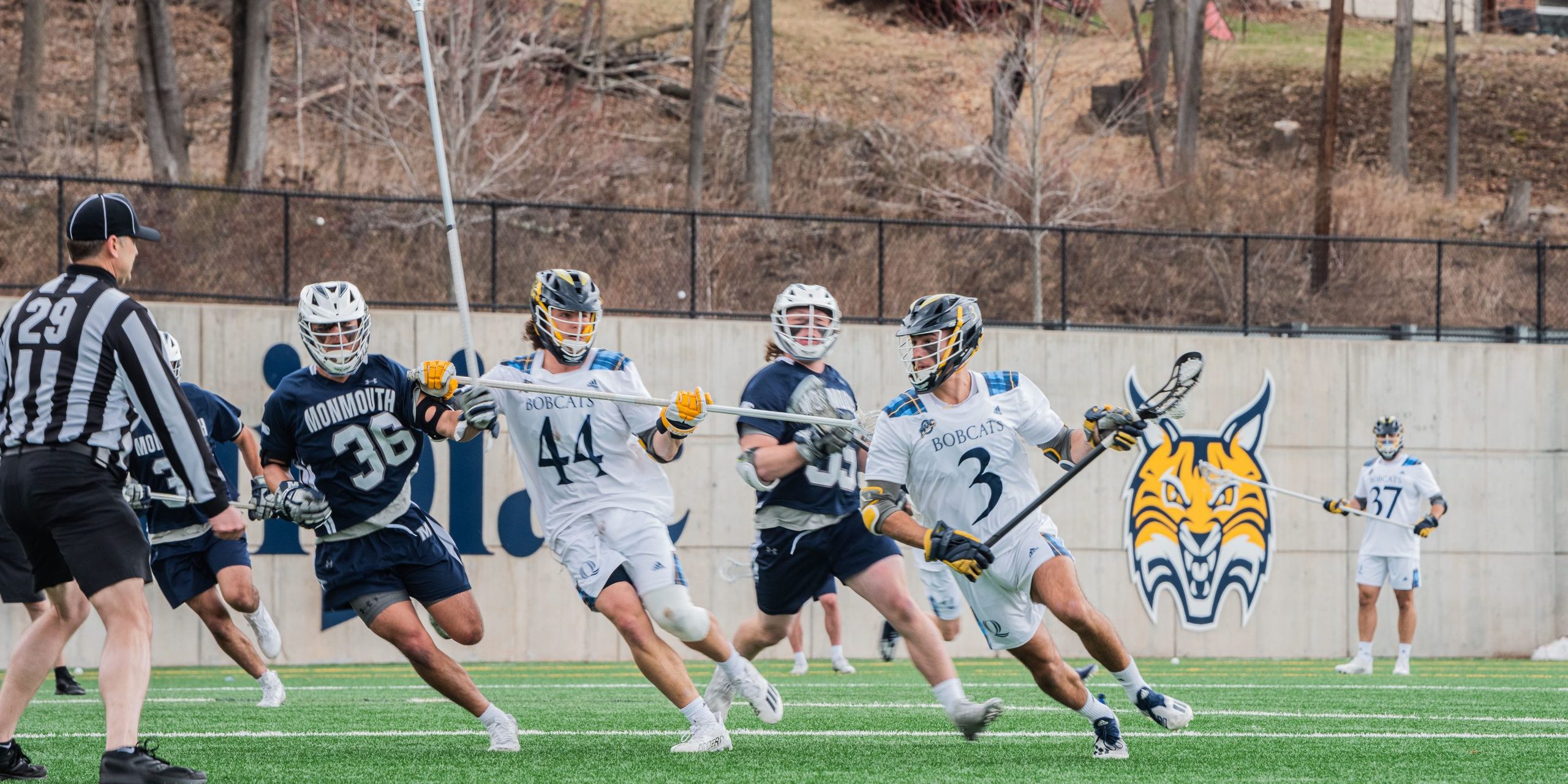 What conceivable connection could there be between political polling and D1 college lacrosse?

At Quinnipiac, it turns out, there is one.

And to have some appreciation of where the Quinnipiac lacrosse program is now, you really need to appreciate where the school itself has come from.

When John Lahey took over the presidency of the college in 1987—and at the time, it was Quinnipiac College—-his ambition was to raise the profile of an institution barely known outside the geographic boundaries of its Hamden, Connecticut campus.

Lahey might’ve gotten a subliminal nudge from the name of the state park that adjoins the Quinnipiac campus: Sleeping Giant.

In any case, Lahey saw something.

He saw enormous untapped potential in a campus strategically located between Boston and New York—and all under the shadow of New Haven and Yale University, located only 8 miles away.

But the institution Lahey inherited might not have seemed worthy of Yale’s shadow.

It was also an academic institution that would be almost unrecognizable to its current students, applicants, and recruits.

Among other things, Quinnipiac:

But in those early days, few people beyond two exits in either direction on the Wilbur Cross Parkway had ever heard of the place.

Which was only part of the problem. 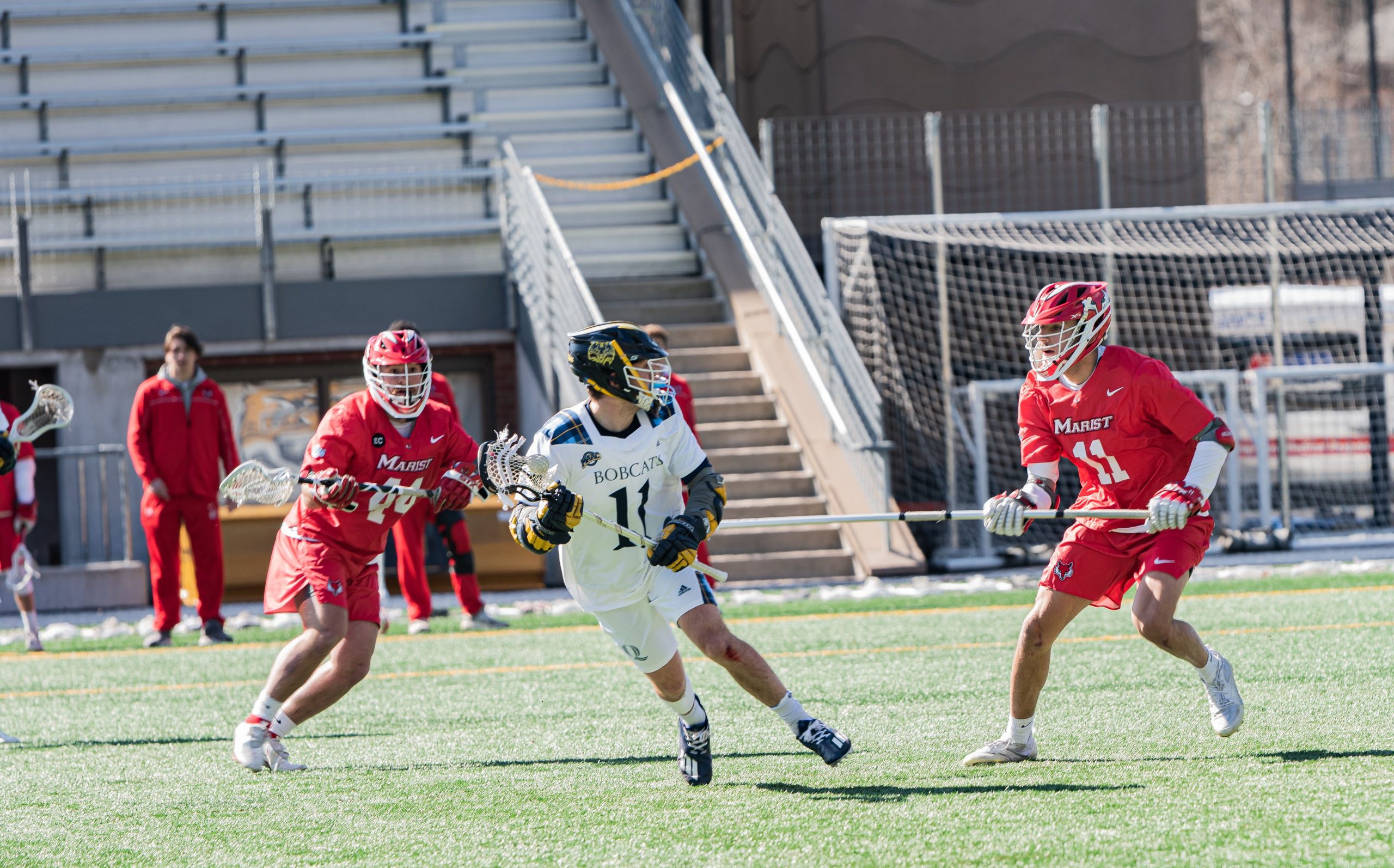 2021 MAAC Rookie of the Year Dylan Donnery works against Marist in an April, 2022 game. (Photo for LaxAcrossAmerica by BlaqPearl)

Quinnipiac on the National Stage

Quinnipiac’s—and John Lahey’s— first foray into the national spotlight involved setting up a polling operation, similar to the one in place at the institution Lahey had just left, Marist College.

But in Quinnipiac’s case, the most immediate problem with name recognition involved, well, the name.

As the leader of of the polling effort told Politico years later: “The name was mangled —kwin-uh-PE-ack, or kwin-uh-PACK.”.

(They weren’t the only ones stumped. Jack McDonald, who left his position as athletic director at Denver in 1995 to take the same post at Quinnipiac, found that the location of the school was as much a mystery as the pronunciation of its name—even among people as close as Boston).

Lahey’s instincts and timing again seemed unerring. At a time when media organizations were beginning to aggressively reduce budgets, and polling costs were spiking, Quinnipiac, among a few other schools, stepped in to exploit the void.

That fledgling polling operation—“the poll that built a university” in Politico’s words— was the initial building block of the school’s play for national recognition.

Now the Quinnipiac University Polling Institute, it has a $2 million annual budget and is housed in a two-story building on campus. It has become the premier university poll. Its footprint—along with Quinnipiac’s name— has achieved national reach. 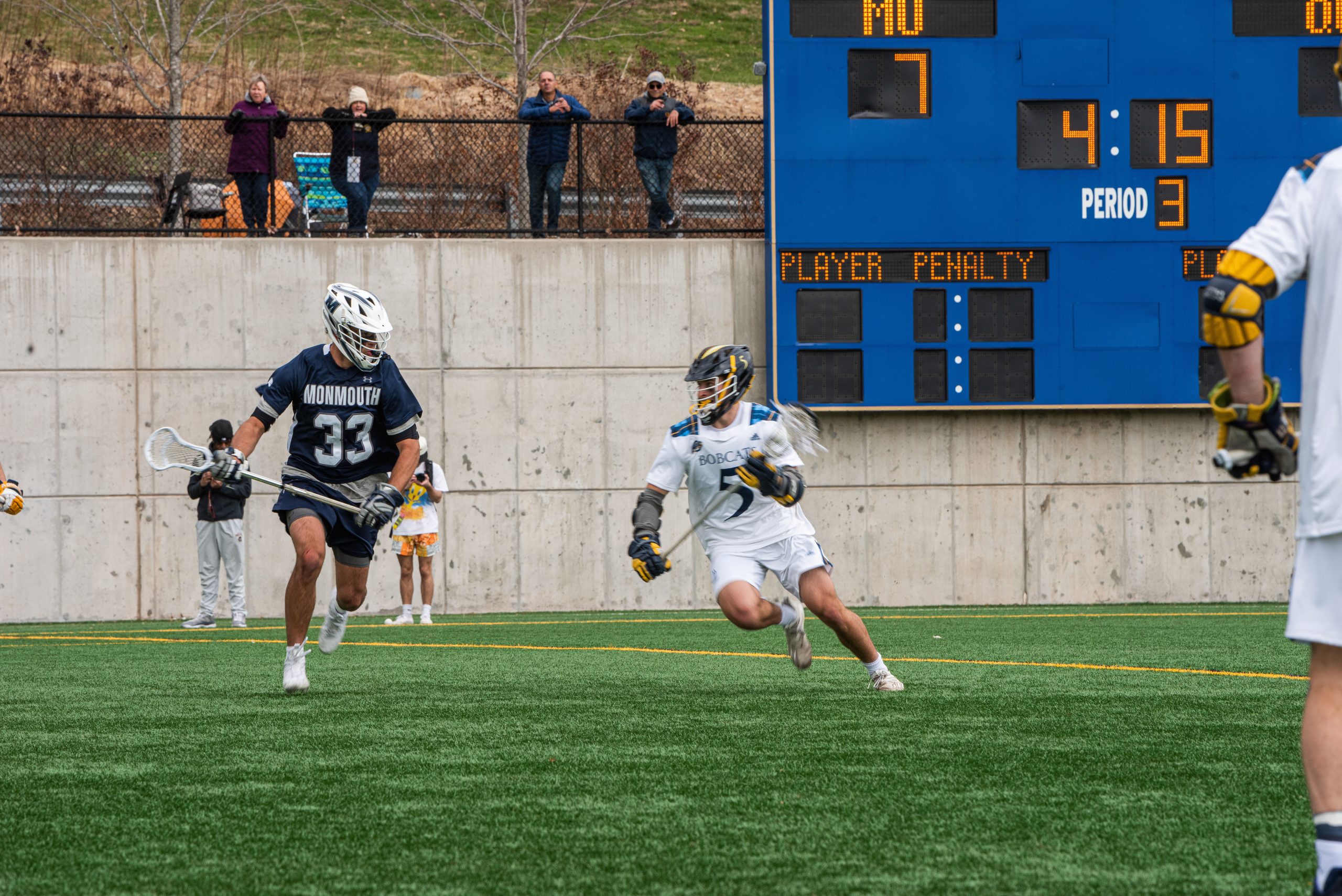 Ward Melville’s Steven Germain in action for Quinnipiac against Monmouth in 2022. (Photo for LaxAcrossAmerica by BlaqPearl)

And the name thing seems to be a lot less of an issue these days.

So much so that several large financial institutions have paid significant amounts to have their name associated with one that was so recently unknown, or at the very least, unpronounceable,

Which introduces the second part of the Quinnipiac growth and marketing strategy.

The Quinnipiac Poll was only one part of the school’s bid for national prominence.

Connecticut-based People’s United bank was the most recent corporation to secure naming rights to a facility on the Quinnipiac campus.

The showcase $52 million 185,000 square-foot arena is both the home of, and a monument to, the school’s phenomenally successful D1 hockey program.

In 1998, Quinnipiac athletics made the transition to Division 1.

In those early days, Rand Pecknold, the only head coach the hockey program has known, shared a phone with the school’s other head coaches and had to commute daily from his teaching gig about an hour from campus.

By 2002, the hockey team qualified for the NCAA Tournament.

And if it once had been unaware of Quinnipiac’s very existence, Yale certainly knew the name, and correct pronunciation, by the time the two schools faced off in 2013—in the NCAA college hockey D1 championship finals. 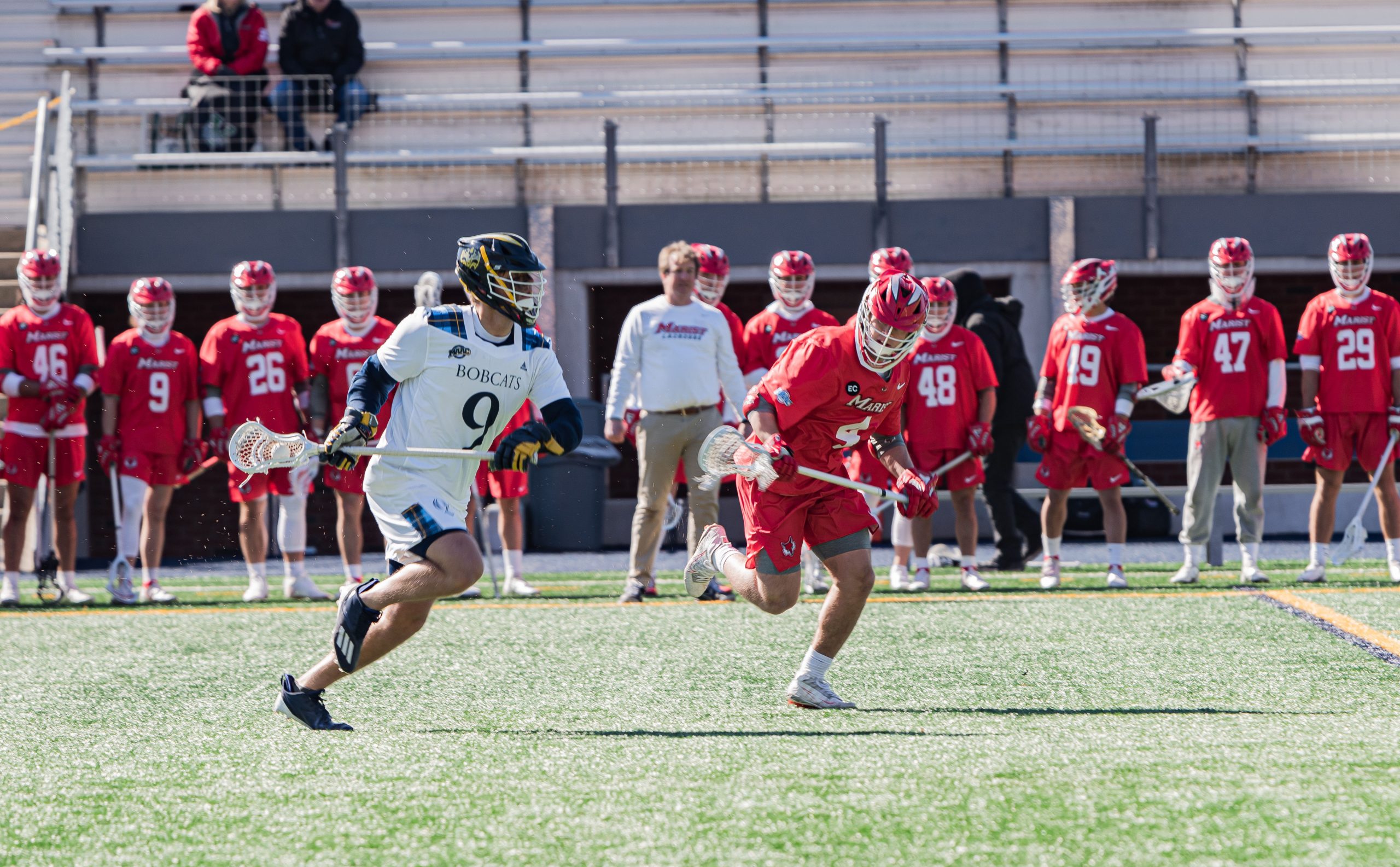 Players like sophomore middie Evan Perry, from Lake Tapps, Washington, demonstrate the recruiting reach of Quinnipiac athletics. Not so recently 80% of Quinnipiac’s student body came from Connecticut. (Photo for LaxAcrossAmerica by BlaqPearl)

Make no mistake: men’s hockey sits at the top of the Bobcat sports hierarchy—and by a wide margin. This extends even to the basketball team that nominally shares the school’s showcase arena.

That said, there are perks to traveling in hockey’s wake.

Quinnipiac athletics has a $25 million operating budget; and in the last several years the school dedicated new and drastically upgraded facilities for field hockey, and soccer and lacrosse.

And 2016 was a highwater mark for Quinnipiac athletics as a whole.

In the 2015-16 season Bobcat teams won regular-season championships in women’s basketball, men’s and women’s hockey, cross country, golf, and tennis, and reached the NCAA Tournament in each of those sports.

2106 was also a landmark season for Quinnipiac lacrosse. The Bobcats went 12-4, qualifying for the NCAA field for the first time by virtue of a win over Hartford in the play-in game.

Their reward was having to play in College Park a #1-ranked Maryland team that featured Matt Rambo, Colin Heacock, Bryan Cole, and Kyle Bernlohr.

The Bobcats actually did pretty well, taking an early lead before falling 13-6 . (By comparison, Syracuse, which faced the Terps in the next round, lost 13-7).

More importantly, the program seemed to be hitting its stride.

Though that team lost six seniors, including Ryan Keenan, its other two scoring leaders (Foster Cuomo and Brian Feldman) also came from a place well-matched to Quinnipiac’s recruiting footprint for hockey: Canada. (Over the years, the Bobcats have attracted a number of top-level Canadian recruits including Adam Bellamy ’18, Riley Palmer ’18, Ryan Keenan ’16, and Dylan Webster ’14)

The 2017 Bobcats also returned in goal someone who had undoubtedly been known to many of the Terp players in that NCAA match-up. Jack Brust had played for Maryland high school power Calvert Hall.

Mason Poli probably didn’t have as rough a start as Rand Pecknold did.

He didn’t have to share a phone, stake out an office in a former janitor’s closet, conduct midnight practices at a high school facility, or work around an annual salary of $6,500.

Poli came to Quinnipiac as an assistant in 2014. He’d been a decorated LSM at Bryant, a Tewaaraton Award semifinalist who also led the nation in longpole scoring (including a hat trick—against Quinnipiac). He’d also gone on to play in the MLL.

In 2017, a Bobcat team that had looked good on paper went 2-9 in a season marked erratic play and high turnovers. Only Brust’s outstanding work in goal (16 saves vs. both Brown and Canisius, for example), seemed to prevent a death spiral.

(In fairness, there was undoubtedly another factor in the team’s disoriented performance. Because of renovations to their field and facility, the Bobcats had to conduct all practices at a high school 15 minutes from campus, and play all home games at Yale’s Reese Stadium. The good news is that the new complex, completed later that year, includes new locker rooms, a turf field with upgraded scoreboard, a press box, and a capacity of 1,500).

2018 marked a turnaround: Quinnipiac was 9-6, defeating in overtime a Brown team that had defeated the Bobcats by an 18-goal margin only a year before, and losing to Canisius, also in overtime, in the MAAC tournament.

Then things started to unravel.

In the fall of 20188, an investigation into a hazing incident led to suspension of the team, and ultimately, the elevation of Poli to head coach.

But Poli would have to enter the 2019 season without the benefit of fall practice, and subject to bar seniors playing in the team’s first five games.

And he’d have to do this saddled with the title interim head coach.

All of which Poli handled remarkably well. The team went 8-6 during the regular season, and reached the MAAC Tournament finals (an overtime loss to Marist).

It was also well enough for Poli to shed the “interim” tag.

But more bad times were ahead. The Bobcats went 0-6 in the Covid-curtailed 2020 season.

The shortened 2021 season saw the Bobcats go 4-3 and seemingly on track for a high MAAC Tournament seed; instead, the team would become subject to Covid protocols and be forced to withdraw from both its regular-season finale and the MAAC Tournament.

On paper at least, the Bobcats entered 2022 with a number of encouraging signs. A number of key players returned from a team that, derailed by Covid in the 11th hour, was undoubtedly high on motivation.

Unfortunately, the bounce-back season hasn’t materialized. Crowned by a humbling defeat in Charlottesville to Virginia on April 16th, the Bobcats’ disappointing season now stands at 2-8.

But there’s reason for hope.

The Bobcats are still relatively young. The offensive core of the team—middies Steven Germain and Ryan Donnery, and Ryan’s twin brother and MAAC Rookie of the Year in 2021, attackman Dylan Donnery—are all sophomores. Jake Tellers, a junior starter at attack, also returns.

Defense losses will be harder to plug. The Bobcats lose goalie Nick DiMuccio, and defensive starters Devin Naidoo and Matt Di Lella; Tommy Shaughnessy, yet another sophomore starter, does return.

Poli and the Bobcats have proven their resilience before. The program is part of an ambitious institution that, time and again, has shown a willingness to commit resources to its burgeoning national profile and winning sports culture.

If patterns hold true, Quinnipiac lacrosse could see much better times ahead.

Quinnipiac University and its Lacrosse Program