You are here:
Minnesota 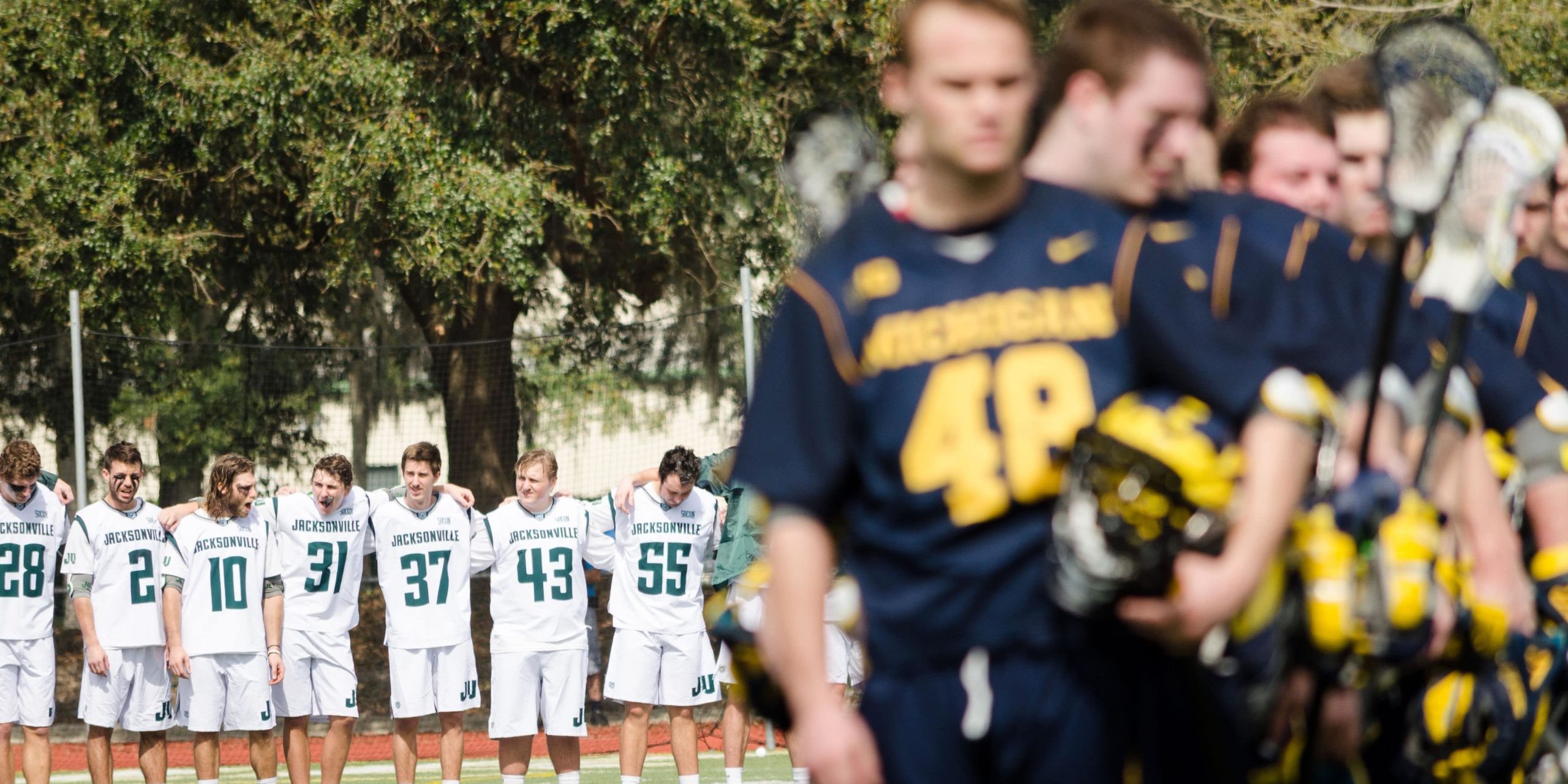 There were 47 players from Minnesota on Division 1 college lacrosse rosters in 2019.

One of them, Nick Washuta, is considered among the nation’s best goalies.

In February 2019, Washuta was coming off a highly successful 2018 sophomore season in which he’d led the nation in save percentage, and seen his University of Vermont team go 12-4, the best record in program history.

Saturday, February 16th had marked a bounce back victory for the Catamounts. 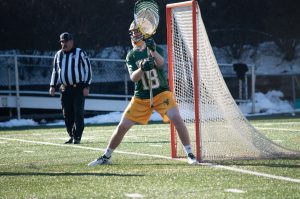 Vermont’s Nick Washuta, from The Blake School and Orono. (Photo for LaxAcrossAmerica by Kevin Labeck)

They’d defeated Holy Cross at home in Burlington, having dropped a game to the Naval Academy the week before in Annapolis. They would have one more opponent in February (Quinnipiac), but their most significant game of the month—and arguably the season—had already been played.

On February 1st, Vermont had traveled to Salt Lake City to face the newest addition to Division 1 college program, the University of Utah.

The University of Utah had also become only the third D1 college lacrosse team west of the Mississippi River, and the westernmost of the three.

Beyond that, Utah’s adoption of lacrosse brought with it the prospect of acceptance by another Power 5 conference.

After all, the Pac-12 already had six D-1 women’s lacrosse teams. A men’s program at Utah could provide the impetus for other conference members like UCLA, USC, Washington, CAL, Stanford, and Oregon to follow suit, and fulfill the promise of a truly national, coast-to-coast sport.

Saturday, February 19th also marked another event—one that took place not in Vermont but in Colorado, at an elevation of 9,600 feet, in the East Brush area near Crested Butte.

Two local residents, training for the Grand Traverse back country ski race to be held in March, were killed in an avalanche. 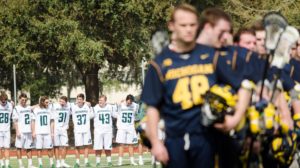 Jacksonville and Michigan players take part in a pregame tribute to Michael Goerne and Owen Green. Green had been a member of Jacksonville’s inaugural D-1 lacrosse class. (Photo for LaxAcrossAmerica by Marcelo Murillo)

Neither of the two men was a native Coloradoan.

His training partner in the Elk Mountains that day, Michael Goerne, 37, had grown up in Edina, Minnesota.

Each had a deep connection to the Colorado lacrosse community.

In their free time both coached at Aspen High School, a program that Goerne had originally founded as a club team in 2006, and within two years, had elevated to the varsity level. In 2016 he led Aspen to a state title and was recognized as Colorado Coach of the Year.

Both men had also played Division 1 lacrosse—Green at Jacksonville, and Goerne at Marist.

Each man also both represented, and had furthered, the expansion of the game of lacrosse—the very thing that Washuta and his teammates had helped celebrate in Salt Lake City only weeks before.

In Green’s case, he’d been a part of the inaugural class of the D1 lacrosse program at Jacksonville, the first in the state of Florida.

Goerne had been a walk-on at Marist; he also had an additional distinction:

He was the first Minnesotan to play Division 1 college lacrosse. 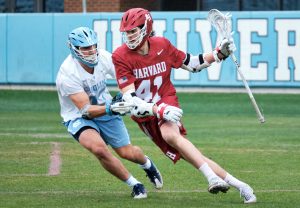 Harvard’s Ryan Graff of Bloomington, one of 46 Minnesotans on 2020 Division 1 lacrosse rosters, in action against North Carolina. (Photo for LaxAcrossAmerica by Alex Zachman)

Lacrosse in Minnesota: A Little History

Though the title initially sounds like a heading from a wide-margined, 1-page pdf, or a slide in a long-discarded PTA pitch deck, it’s actually a fairly substantial volume by J. Alan Childs—running, with bibliography and appendixes, to almost 350 pages.

Its chronology begins with the Ojibwe tribe in roughly 1100 AD. The Minnesota part of the narrative (as least what non-Native Americans were around to document) is taken up in the 1830’s.

The first University of Minnesota hockey team hit the ice in 1895.

The St. Paul Lacrosse Club, on the other hand, was founded in 1883.

But as in a number of other states, lacrosse in Minnesota then went into an extended dormant state.

By 1914 club teams had disbanded, and though the game continued to be played among indigenous tribes like the Ojibwe, it virtually disappeared from the state until the 1970’s.

But as described by Childs, even the sport’s “revival” during the 70’s had some particularly unpromising aspects.

One of the first challenges faced by the Twin Cities Lacrosse Club, formed in 1976, was sourcing equipment; at the time, not a single sports store in the Twin Cities area sold lacrosse stick or even balls, let alone any protective equipment.

Lacking money for uniforms, the Club made use of the resources of a team member and doctor.

Another player, Dave White, decided to address another fairly fundamental impediment: the lack of qualified officials to work games (which, along a shortage of qualified coaches, continues to be a barrier to the game’s sustained growth in many areas).

Childs notes, and the emphasis is his, “For years White was the ONLY official in Minnesota”.

All of which makes the D-1 inroads achieved by Minnesotans, beginning with Michael Groene, that much more remarkable. 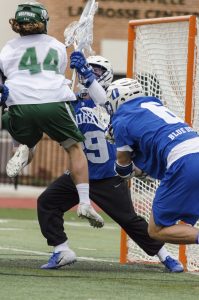 Stillwater’s Turner Uppgren in goal for Duke against Jacksonville. (Photo for LaxAcrossAmerica by Marcelo Murillo)

The Progress of Lacrosse in Minnesota

When Michael Goerne joined the Marist team as a walk-on in 2000, Minnesota had 11 teams statewide—all club teams (Goerne himself had founded the Edina Lacrosse Association in his hometown).

Lacrosse in Minnesota has since been sanctioned, and the state currently has about 82 high school programs.

As mentioned, there were 47 players from Minnesota on 2019 Division 1 rosters. (By comparison, Michigan, generally presumed to be much farther advanced on the hotbed continuum, has 52).

Minnesotans were also represented in each of the 10 2019 D1 conferences. 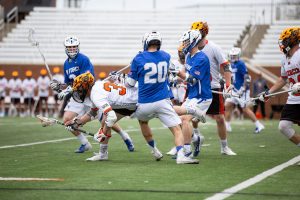 Sunday, February 16th will mark the first anniversary of the death of Green and Goerne. Some small part of that remembrance should recognize the continued growth of a game that both men clearly loved.

Fittingly, on the anniversary, CAL’s D1 women’s team will be playing Virginia, at home, in Berkeley; Stanford’s women team will be at home as well, against San Diego State.

On the men’s side, Utah will be coming off a game the day before against Air Force in Salt Lake City; and Holy Cross will again have just played Vermont—featuring Nick Washuta of Orono and Porter Awad of Apple Valley.