You are here:
Florida 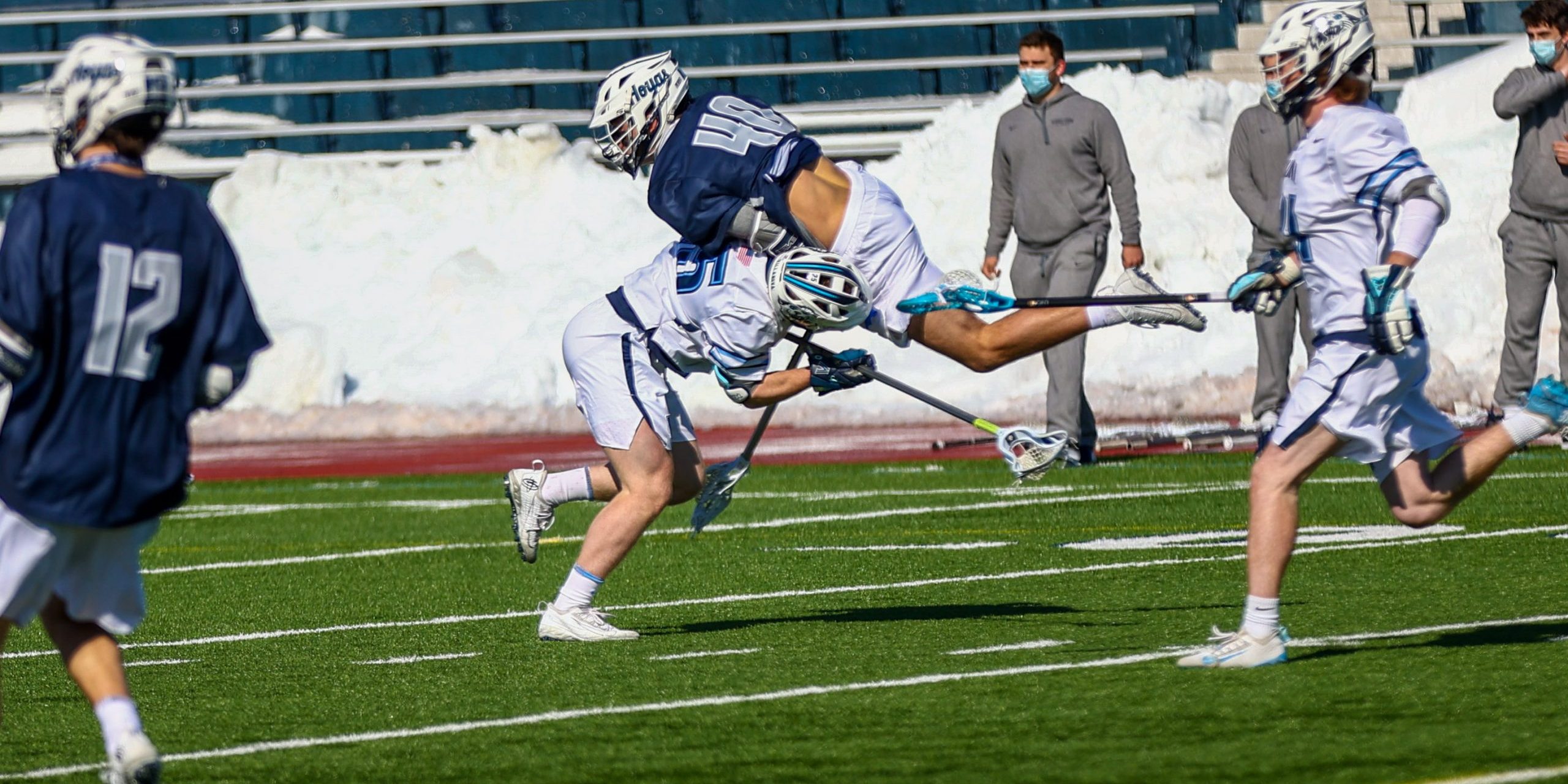 10 years ago this week a milestone in the history of Florida lacrosse was achieved in the swamp.

No, not in “The” Swamp —as in the celebrated Gainesville haunt of Dan Mullen, Steve Spurrier, Urban Myer, and the Florida Gators.

The particular “swamp” involved here was a decidedly lower-case one: the New Jersey wetland that went by the name The Meadowlands.

It was in this stadium, the former home of the New York Giants and New York Jets, that on April 3, 2011 Florida lacrosse came of age.

But make no mistake.

Florida lacrosse was, by all measures, already on the map in 2011.

If you look at Inside Lacrosse’s Top 20 for that year, for instance, you’ll find a total of 7 Floridians on those elite rosters—including 3 players,  Maryland’s Jesse and Jake Bernhardt, and Lee Coppersmith of Johns Hopkins—who are all among Florida’s all-time best lacrosse players.

(Just for the record, The remaining players from that group were: Wyatt Melzer of Virginia, Matt Bellando of Stony Brook, Tyler Knight of UMASS, and Shane McHugh of Brown.)

And, by 2011, three of the players mentioned above had already represented Florida in Under Armour All-America game, college lacrosse’s pre-eminent showcase for incoming D1 freshman talent.

Beyond that, the state’s first D1 college lacrosse program and self-proclaimed Lacrosse Capital of The South, Jacksonville, had had its first year of competition, taking games in that inaugural 2010 season from Rutgers, Denver, Providence, and Mount St. Mary’s.

So what was so significant about this one day? 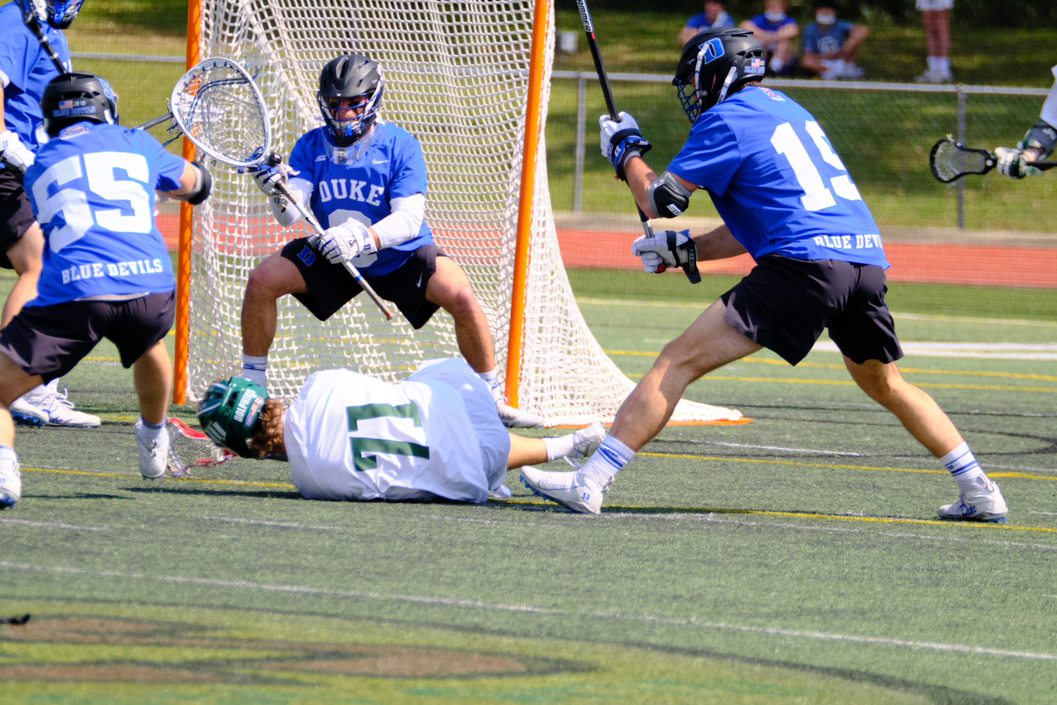 Fort Lauderdale’s Mike Adler in goal for Duke in 2021 against Jacksonville. The Saint Joseph’s  transfer played at St. Thomas Aquinas, and had been one of the most prized D1 transfers. (Photo for LaxAcrossAmerica by Marcelo Murillo)

The 2011 Big City Classic: Lacrosse in The Meadowlands

The Big City Classic now seems like just one in a litany of annual sporting events no longer with us.

In 2011, The Classic, which would be held from 2009 until 2013, was in its third year. Previous Classics had drawn well, with the 2010 event—the first of any kind to be held at what was then the New Meadowlands Stadium—  surpassing 25,000 in attendance.

In an effort to increase attendance even further, organizers sought to give the event more local flavor.

The day’s undercard event would feature St. John’s vs. Rutgers.

Upstate Syracuse had proven itself more than happy to exploit New York’s college sports vacuum, ultimately (and controversially) promoting itself in a campaign as “New York’s College Team”.

Still, the Orange were local enough for a Tristate crowd to fit the bill. And they had also entered the season with the nation’s #1 ranking, and in the Blue Devils would be playing the defending national champion.

Sandwiched between those two games would be another D1 contest: North Carolina vs. Johns Hopkins.

And kicking off the day would be a high school game between New Jersey power Don Bosco against Florida’s St. Andrews.

Much of the “local” angle so sought after by the event’s promoters didn’t have to be concocted.

Don Bosco was a regional lacrosse power. The school is located in the Bergen County town of Ramsey, but is also just two miles from the New York border.

The Hop also had a number of players from Long Island and Westchester; and the Blue Jay coach, Dave Pietramala, had begun his Hall of Fame career playing high school at nearby Hicksville on The Island.

But the dominant, central storyline of the day involved the homecoming of Long Island stars on the Tar Heels.

At the top of the marquee was Billy Bitter of Manhasset, who was coming off a junior season in which he had been a First-Team All-American at attack, despite injuries.

Also in the spotlight was another First-Team All-American, Ryan Flanagan, a senior defenseman out of West Islip and a more recent West Islip grad, freshman Nicky Gallaso.

Gallaso, an attackman, had entered the 2011 season as the highest-rated freshman overall by Inside Lacrosse.

As it turned out, if you’d come to see the locals that day, you probably weren’t disappointed.

Bitter, as usual, looked overpowering, in a 4-goal performance; and Ryan Flanagan was predictably dominant on defense, recording 5 ground balls and causing 4 turnovers.

And the headline of the day would have nothing to do with Florida.

It would come from the main event of that day’s triple-header, with Syracuse, featuring in goal someone who would ultimately figure pretty prominently in the evolution of Florida lacrosse, John Galloway,  looking especially impressive in dispatching Duke 13-11.

But if you’d been alert enough, you might have noticed the ground shifting—subtly, maybe, but still significantly.

You might have seen something in the fact that The Hop’s 10-9 victory came on a goal scored in the last two minutes by Boca Raton native Lee Coppersmith.

And that, in the earlier high school game Florida’s St. Andrew’s had defeated New Jersey’s Don Bosco 9-8 in overtime.

And that Coppersmith, you might have noticed, was a graduate of none other than St. Andrew’s. 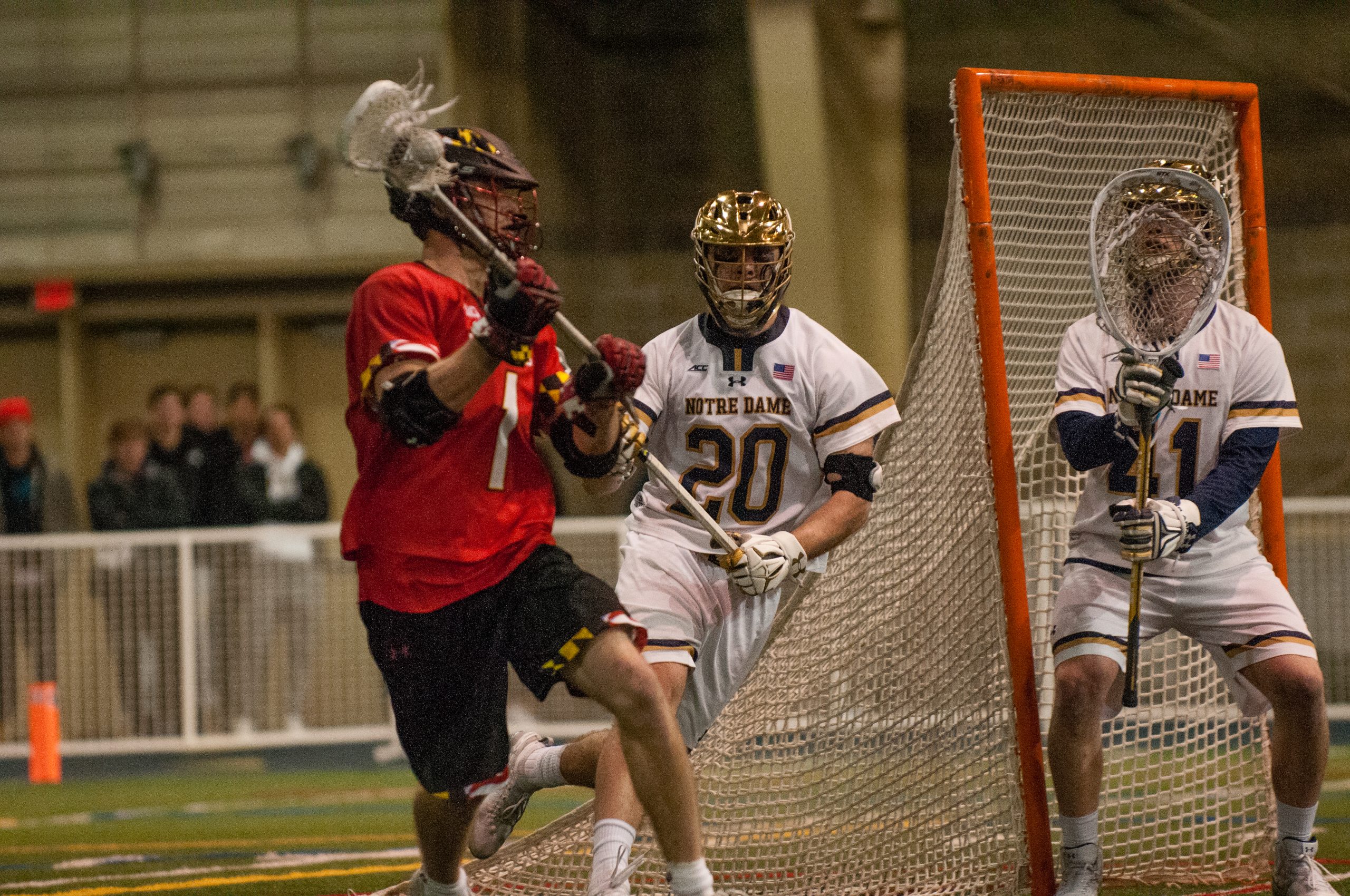 So Why Exactly Was This a Milestone in Florida Lacrosse?

To its credit, the Long Island daily Newsday, for one, did actually pick up on this, if only in a very brief account in the game.

Newday’s account mentions not only Coppersmith but also Bassett. “Unlike Baltimore, where Johns Hopkins is located, and Long Island, the home of Hopkins coach Dave Pietramala, Florida and Arizona aren’t lacrosse hotbeds”.

But should the Florida/non-hotbed angle have gotten more attention at the time? If so, why exactly?

Hopkins should definitely get some credit here.

That 2011 Hopkins team had the two Arizonans mentioned above, All-American goalie Pierce Bassett and Hunter Rogers.

It also included Will McCance of Texas, and Rex Sanders of Minnesota,

And this was in addition to Coppersmith. And Coppersmith was not a walk-on; he was, in fact, the first Floridian recruited by JHU.

[Special thanks to Lee Roggenburg of Florida Lacrosse News for passing along a correction here. The first Hopkins recruit from Florida was actually Adam Bond, currently the coach at Calvary Christian Academy in Ft. Lauderdale. He’d been recruited to The Hop by then coach Tony Seaman, another name featured in this post.  Bond, who played his final two seasons at Washington College, including one under future Blue Jay coach John Haus, was the D3 tournament scoring leader in 1997].

Coppersmith also wasn’t the only Floridian on the roster for Hopkins that day: the other was LSM Matt Leighty.

That day in April in The Meadowlands wouldn’t be the sole high-water mark for these players and teams.

Hopkins didn’t go on to a national championship in 2011; but it did manage to beat during the regular season both of the teams that appeared in the title game.

It defeated the eventual national champion Virginia 12-11—-with a hat trick coming from Lee Coppersmith.

The player who scored in overtime against Don Bosco, Conor Whipple, graduated as the Scots all-time leading scorer.

He started his college career at Georgetown and was a four-year All-American—though not with the Hoyas.

Whipple left Georgetown early on to play for his father at Tampa, one of several excellent Division II teams to have taken root in Florida.

(Matt Bellando, another D1 player mentioned above, would as well ultimately settle at what was then a D3 school, Long Island University).

And the Scots clearly weren’t the only elite high school team in the Sunshine State that year.

As talented as St. Andrews was in 2011, it couldn’t win out within its own borders: it lost 11-10 to Lake Highland Prep in the finals of Florida state championship. 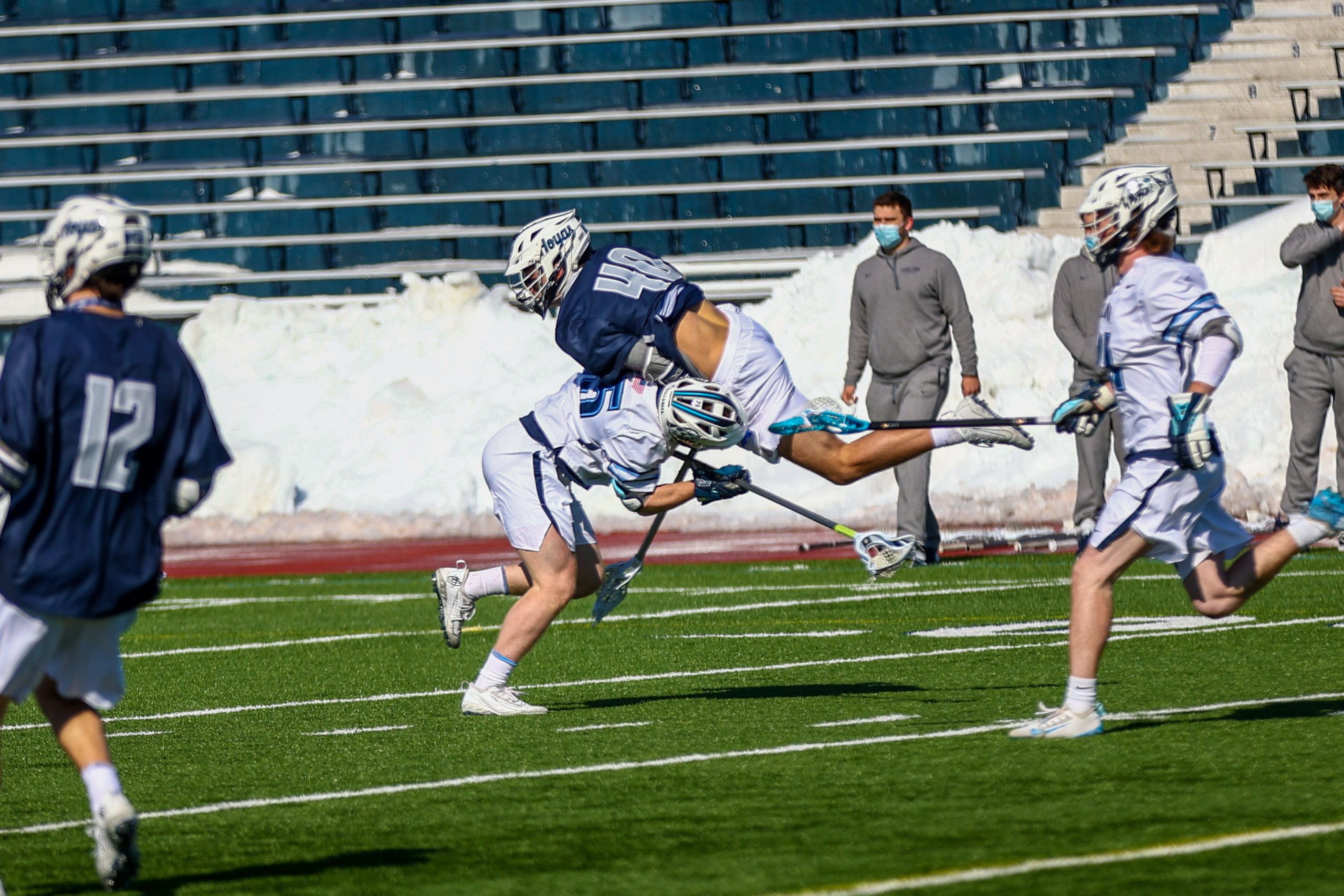 The perception of Florida lacrosse, and the underlying reality, certainly didn’t change overnight, and certainly not as a result of a single day.

Eventual All-American Sergio Salcido still would face a disheartening amount of skepticism for aspiring to play for Syracuse coming out of Winter Park High School.

But a lot has changed—with just a few of the highlights included below.

There are 86 Floridians currently on active 2021 D1 college lacrosse rosters.

(“Active rosters” is basically a way of saying “everyone except the Ivy League”.  With the Ivies not in formal competition in 2021, that unfortunately means excluding from the overall count such talented players as Dartmouth’s George Prince, of Bradenton, and  Princeton’s Terrell Seabrooks, of West Palm Beach).

In addition to the three Bernhardt brothers, Lee Coopersmith, and Sergio Salcido, other Floridians who have excelled at the D1 level in recent years include Sam Talkow and, currently, Ponte Vedra’s Dylan Hess.

Another measure of Florida’s penetration of the upper reaches of D1 lacrosse can be found on NCAA national championship rosters.

In that same 2011, Virginia took the national championship, with defenseman Wyatt Melzer, another St. Andrew’s grad, on the Cavalier roster.

Maryland took the title in 2017 with Lake Brantley’s Jared Bernhardt.

The next year, Yale took its first national championship in the sport since 1883, with Eli defenseman Jerry O’Connor, out of The Benjamin School, thwarting a last-minute offensive surge by Duke All-American Justin Guterding. 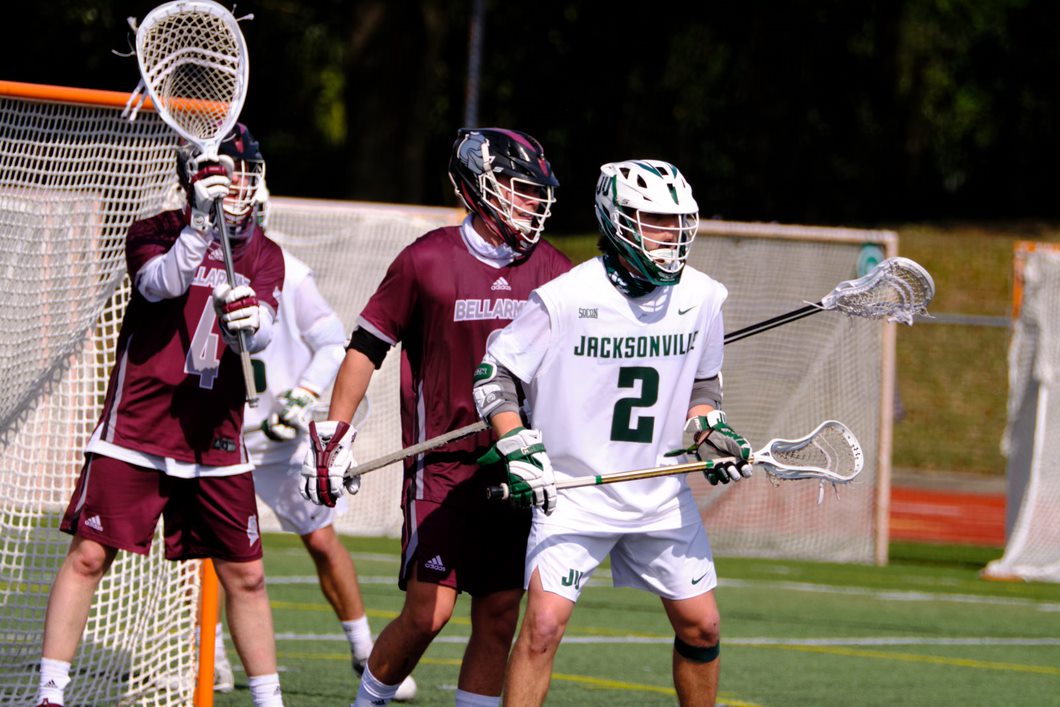 One of the staples of the online lacrosse community is the hopeful (though often delusional) How-Soon-Until-My-State-U-Goes D1-In-Lacrosse post.

For some time things looked promising in Florida.

But the state seemed to have squandered its best shot with the departure of longtime University of Florida athletic director, Jeremy Foley, a champion of the game who’d not only accumulated 40 years worth of clout, credibility, and prestige in Gainesville, but had actually played college lacrosse (at Hobart).

On the other hand, 2011 also marked the second season of D1 play for the Jacksonville Dolphins, a program that has consistently signaled its national ambitions in the years since.

The school’s commitment to lacrosse at the D1 level (with both a men’s and women’s program) has been demonstrated by the unveiling of a $1.8 million lacrosse-only facility, and, on the men’s side, with the hiring of an undisputed star like John Galloway as coach in 2017.

John Galloway is the vigorous, youthful face of Florida coaching at the D1 level, with ties to Team USA, the NLL, and MLL.

With another portion of Florida’s coaching talent, on the other hand, the likelier affiliation is AARP.

In 2011, Oxbridge Academy in West Palm Beach hired veteran coach Stan Ross. Ross, who would also coach Major League Lacrosse’s Florida Swarm, had had the misfortune of serving as head coach during the unraveling and eventual demise of Butler’s D1 lacrosse program.

But Ross proved to be only the advance guard in an influx of northern coaching talent to the state. Just as the state has long been favored by snowbirds and retirees, Florida high school lacrosse has seen a parade of northern transplants.

And this was, and is, hardly a group of geriatric dabblers looking to kill a few afternoon hours before the 5:00 surf n’ turf dinner special.

They include not only Ross, who in addition to Butler, also coached at Loyola, Princeton, Denver, and Towson, Joe Cuozzo, winner of eight New York state titles as coach of Long Island colossus Ward Melville, and Richard Speckmann, who was head coach for over 40 years at Nassau Community College, also on Long Island.

(One of the newest to join this group is longtime coach at New England power Avon Old Farms, Skip Flanagan).

But the biggest hiring coup may have been St. Andrew’s nabbing Tony Seaman.

Yet another Hall of Famer thrown into the state’s high school coaching mix, Seaman is the only D1 coach to take three different schools to the NCAA Tournament (Penn, Johns Hopkins, and Towson).

Seaman’s hiring, he wrote, “sends a message to the national lacrosse community that Florida lacrosse is taking it to the next level”.

Another credible measure of Florida’s lacrosse growing national stature is in Under Armour selections. 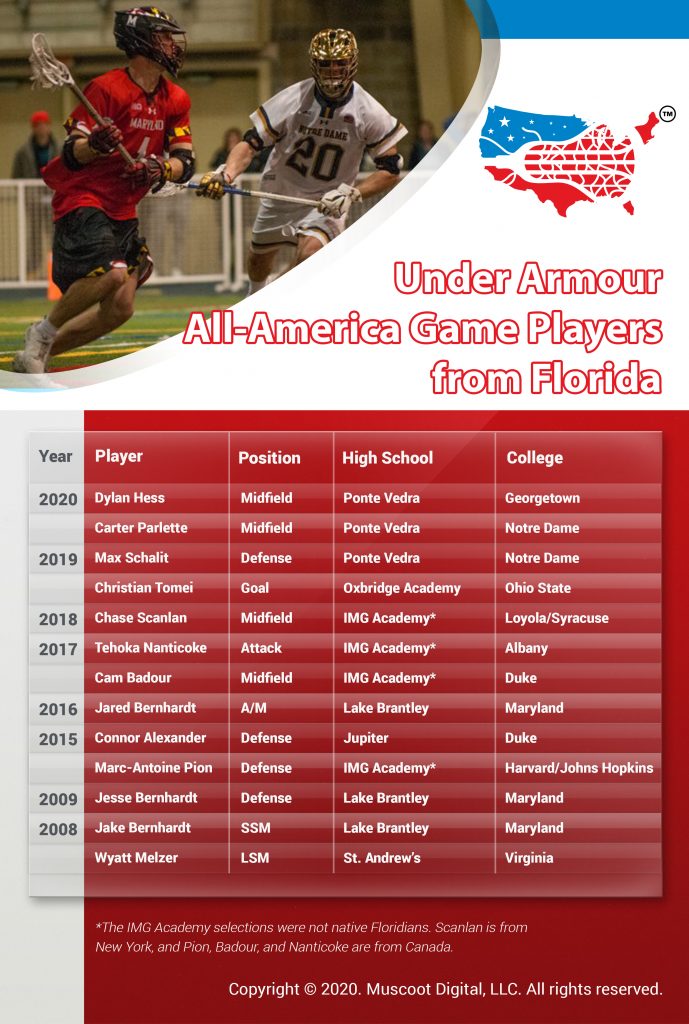