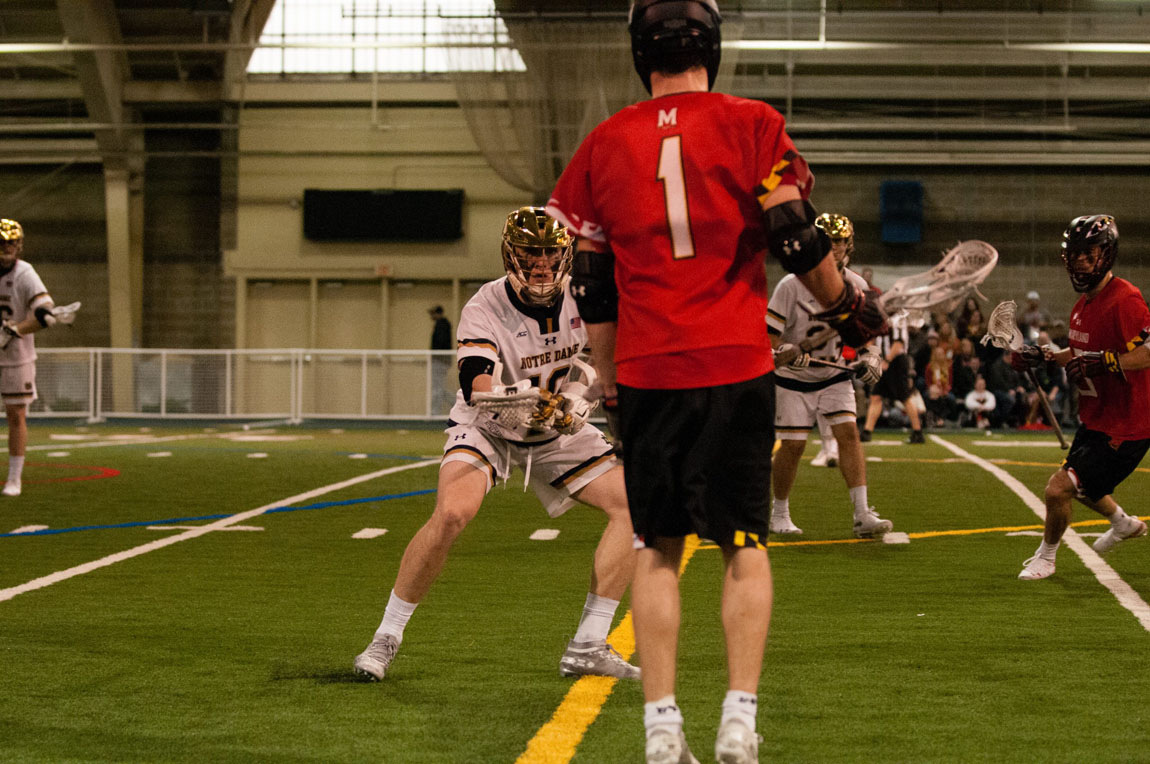 It might seem ridiculous to focus on whether an individual player will be on a college lacrosse field next spring when it’s still unclear whether anyone will be.

Granted, Bernhardt’s an exceptional talent. A First-Team All-American and Tewaaraton Award finalist, the Maryland attackman is also indisputably one of the all-time best lacrosse players from Florida (with two of the other locks for that honor being his brothers Jake and Jesse, both members of the USA’s 2018 national team).

And even with all the other convoluted COVID sagas now making the rounds, his story is one of the more involved ones.

After all, once the pandemic brought an end to what would’ve been his senior season at Maryland, he made plans to play a year of D2 football—which still wouldn’t prevented him from playing lacrosse again with the Terps.

But, as it turns out, the pandemic also prevented him from playing football this fall, though that football season may yet take place.

Which would inevitably lead to a conflict with a college lacrosse season—assuming that a lacrosse season, in some shape or form, can actually be salvaged.

So where does that leave Bernhardt and the Terps?

While this post doesn’t offer up any unique insights into Bernhardt’s plans or intentions, it does provide some background information, and some context for his eventual decision. 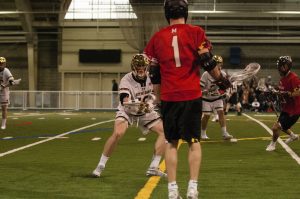 What’s his next move? As the recipient of Maryland’s #1 jersey, Jared Bernhardt was the latest in a line that has included such past Terp stars as Matt Rambo, Joe Walters, and Connor Kelly. (Photo for LaxAcrossAmerica by Jim Harris Photography),

The pandemic has forced a number of changes on college athletes—beyond the obvious health consequences and risks that everyone is experiencing.

College lacrosse coaches and players must navigate a minefield of rulings and restrictions at the state, local, conference, and insitutional levels. Teams such as Duke have been holding on-campus practices, while players at other D1 programs (such as Princeton and Hopkins) have been denied any access to campus facilities.

Eligibility rules and financial considerations have also, inevitably, played a part. Some players chose to forego a final year of eligibility in favor of entering the job market (with some landing on pro lacrosse rosters).

Others chose to sit out a season; and some, most notably the cream of the Ivy League’s senior class, preserved a fourth season only by transferring to programs such as Duke and Notre Dame.

And then you have those lacrosse players who in the midst of all this, had been attempting to switch sports.

Pat Spencer had seemingly pulled off that trick.

He’d had a stellar lacrosse career at Loyola. In addition to earning Patriot League Player of the Year honors four times, he was also a three-time First-Team All-American and ultimately the 2019 Tewaaraton Award winner.

Spencer’s goal wasn’t merely to get some token Big Ten playing time or appear in a team picture that might provide a future office memento.

He not only made the roster at Northwestern but became the Wildcats’ starting point guard, finishing the season with 10.4 points and 4.1 rebounds per game; and though the college basketball season was cut short, he was still able to play in 31 games.

And his shot at playing basketball professionally hasn’t been fully derailed either. He’s signed with Tandem Sports and Entertainment Agency to pursue those opportunities, most likely initially with either the NBA’s development “G” league or in Europe.

Jim Bernhardt’s coaching career was centered not on lacrosse, but football.

The family patriarch, who saw all three of his sons win scholarships to play lacrosse at Maryland before he died in 2019 at the age of 63, had an extensive football resumé at both the pro and college levels.

He’d served on staffs at Hofstra, Central Florida, Penn State, and Brown. Among his players at Brown was Bill O’Brien. O’Brien would later hire Bernhardt for his own coaching staff at Penn State, and bring him along when he took on the head coaching job with the N.F.L.’s Houston Texans.

But he’d also been a multisport athlete himself, playing both football and lacrosse at Long Beach High School on Long Island, and again at the collegiate level at Hofstra.

His sons continued that tradition.

All three played both football and lacrosse at Lake Brantley High School in Longwood, Florida. Jesse was a linebacker and defensive MVP; Jake was all-district at quarterback and running back; and Jared compiled 4,000 all-purpose yards and 30 touchdowns at QB during his junior and senior seasons at Lake Brantley. 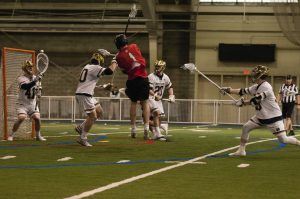 But All This for DII Football?

Pat Spencer was fortunate enough to get in most of his basketball season for the Wildcats before the full force of the pandemic set in. He also had the advantage of already playing four full seasons of lacrosse at Loyola before moving on to basketball.

But what seems to be different in Spencer’s case is the apparent stakes. Spencer aspired to play in one of college basketball’s premier conferences, the Big Ten, and now enjoys at least some prospect of continuing to play the game professionally.

Bernhardt’s plan doesn’t seem anywhere near as ambitious or sensible: why go to all this trouble to play college football if it’s going to be at the DII level?

Bernhardt tied his fortunes to Ferris State, a team that played in a D1 national championship final as recently as 2012.

But the Bulldogs also have a formidable D2 football program. Since the arrival of head coach Tony Annese in 2012, the school of roughly 14,000 located near Grand Rapids, Michigan, has an overall record of 87-16.

In the past 8 years, the Bulldogs have gone unbeaten in four regular seasons, and made the D2 playoffs in 6; in that same time period, they also went to the national semifinals 3 times, and, in 2018, to the national championship game.

Annese’s biggest coup might have come close to home, within the Great Lakes Intercollegiate Athletic Conference. The GLIAC had previously been under the ironclad Grand Valley State, a team that in the decade prior to Annese’s arrival at FSU had won 4 D2 national championships and gone 122-13.

Entering 2020 season, which would’ve been the program’s 112th,  Ferris was rated #4 nationally among D2 schools. 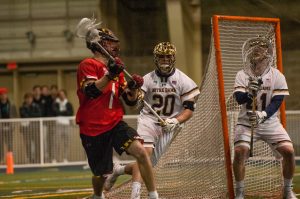 The Appeal of FSU Football

But there were a few other things aside from the program’s stature and Annese’s track record that no doubt appealed to Bernhardt.

In his senior year, the option got scrapped (and without its constraints put impressive numbers, running for over 1,400 yards, passing for another 751, and recording 12 touchdowns).

Still, Ferris State’s triple-option is similar to what Bernhardt ran back in high school; and it’s been one that the Bulldogs have honed. For instance, in the 2018 season under offensive coordinator Steve Casula (since departed for Jim Harbaugh’s staff at Michigan), Ferris State ranked 9th nationally in total offense at the D2 level.

And it’s an offense that can showcase a quarterback.

Leave it to UVA’s compliance department to strike upon the athletic equivalent of something humankind had previously only witnessed in the movie “Flatliners”, or maybe in Jon Snow’s movement between mortal realms at the hands of the Red Woman.

In fairness, Virginia Coach Lars Tiffany has made the point that UVA’s administrators merely discovered a long-forgotten NCAA waiver provision and didn’t come up with it on their own. (And anyone capable of giving NCAA regulations that prolonged and close a reading is probably due some recognition, even without hitting upon any sort of revelation).

It’s one thing to be able to dispatch a player to play another sport at another school in another division. No mystery there.

What UVA managed to unearth was a way to bring athletes back from another school and another sport…and another division.

The previously-neglected, stumbled-upon 20-year-old provision that Tiffany referred to as a “big gold nugget” had immediate implications for the Cavaliers. It apparently would’ve enabled UVA All-American midfielder Dox Aitken to play football in the fall of 2020 at Villanova as a enrollee in that school’s School of Business…and then return to Charlottesville for the 2021 lacrosse season, along with the credits he’d earned at Villanova.

That plan has also obviously been derailed by the pandemic.

All of which makes the COVID-complicated permutations for players like Bernhardt and Aitken even more head-spinning.

By all appearances John Tillman hasn’t been leaning on Bernhardt to make a decision on his lacrosse future—but for all practical purposes he really doesn’t have to. His brother Jesse is on staff as Maryland’s defensive coordinator. But it’s also a practical reality that Jared, like just about everyone else in the lacrosse world and beyond, finds himself in a state of suspended animation, just waiting for a multitude of uncertainties to work themselves out.

Even without him, Maryland will field a strong team in (hopefully) the 2021 season.

The Terps will be adding two highly-talented graduate transfers at attack, Eric Holden of Hobart and Griffin Brown of Colgate.

Like Duke and Notre Dame, Maryland has also been the recipient of a complimentary Ivy League Gift Basket in the form of Yale transfer LSM BJ Burlace. The Terps will also have the benefit of returning juniors such as Brett Makar and John Geppert.

For the purposes of this site—which focuses on D1 lacrosse outside traditional hotbeds—it’s worth noting that the Terp talent base will be a geographically broad one.

In addition to incoming freshman Ajax Zappitello (Oregon), the incoming class will also include 5-star recruit and Under Armour All-American Eric Malever, who compiled 520 career points at Georgia’s Woodward Academy.

In addition to Logan Wisnauskas, the Terps can also look forward to the return of seniors Anthony DeMaio (California) and Bubba Fairman (Utah).

But, on the other hand, Bernhardt’s absence would undeniably be felt. A Tewaaraton Award finalist in 2019, Bernhardt ended that season with 51 goals and 27 assists.

In the 6 games played in the foreshortened 2020 season, he’d already recorded 29 points; and for the record, those numbers weren’t recorded against soft, early-season pushovers: he scored hat tricks against Richmond, Penn, and Albany.

In any case, Bernhardt’s 2020 pace had put him squarely on track to become the Terps all-time leading scorer. It’s hard to imagine that losing a talent capable of upstaging Terp legends like Frank Urso, Matt Rambo,  Joe Walters, Matt Hahn, and Rob Wurzburger wouldn’t come at some cost.